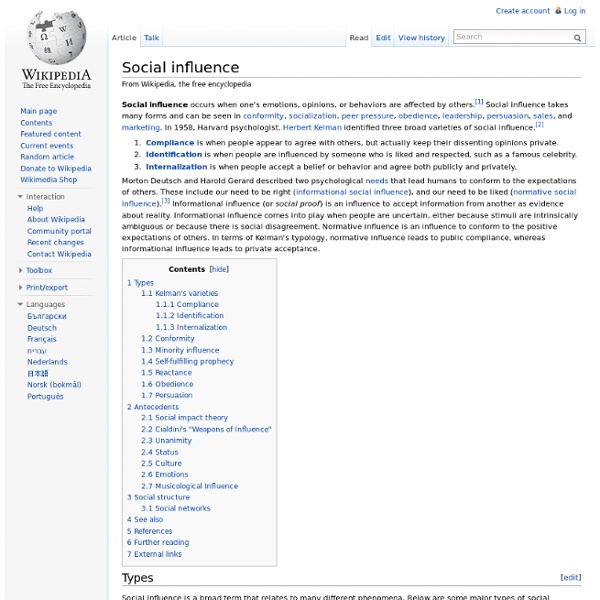 Morton Deutsch and Harold Gerard described two psychological needs that lead humans to conform to the expectations of others. These include our need to be right (informational social influence), and our need to be liked (normative social influence).[3] Informational influence (or social proof) is an influence to accept information from another as evidence about reality. Informational influence comes into play when people are uncertain, either because stimuli are intrinsically ambiguous or because there is social disagreement. Normative influence is an influence to conform to the positive expectations of others. Types[edit] Social Influence is a broad term that relates to many different phenomena. Kelman's varieties[edit] 1) Compliance[edit] 2) Identification[edit] Identification is the changing of attitudes or behaviors due to the influence of someone that is liked. 3) Internalization[edit] Conformity[edit] Conversion includes the private acceptance that is absent in compliance. Status[edit]

Conformity Conformity is the act of matching attitudes, beliefs, and behaviors to group norms.[1] Norms are implicit, unsaid rules, shared by a group of individuals, that guide their interactions with others. This tendency to conform occurs in small groups and/or society as a whole, and may result from subtle unconscious influences, or direct and overt social pressure. Conformity can occur in the presence of others, or when an individual is alone. For example, people tend to follow social norms when eating or watching television, even when alone. People often conform from a desire for security within a group—typically a group of a similar age, culture, religion, or educational status. Although peer pressure may manifest negatively, conformity can have good or bad effects depending on the situation. As conformity is a group phenomenon, factors such as group size, unanimity, cohesion, status, prior commitment, and public opinion help determine the level of conformity an individual displays. Age[edit]

Social psychology Social psychologists therefore deal with the factors that lead us to behave in a given way in the presence of others, and look at the conditions under which certain behavior/actions and feelings occur. Social psychology is concerned with the way these feelings, thoughts, beliefs, intentions and goals are constructed and how such psychological factors, in turn, influence our interactions with others. In addition to the split between psychology and sociology, there has been a somewhat less pronounced difference in emphasis between American social psychologists and European social psychologists. As a broad generalization, American researchers traditionally have focused more on the individual, whereas Europeans have paid more attention to group level phenomena (see group dynamics).[3][page needed] History[edit] Intrapersonal phenomena[edit] Attitudes[edit] Persuasion[edit] The topic of persuasion has received a great deal of attention in recent years. Social cognition[edit] Self-concept[edit]

Group polarization Overview[edit] Group polarization is the phenomenon that when placed in group situations, people will make decisions and form opinions to more of an extreme than when they are in individual situations. The phenomenon has shown that after participating in a discussion group, members tend to advocate more extreme positions and call for riskier courses of action than individuals who did not participate in any such discussion.[3] This phenomenon was originally coined risky shift but was found to apply to more than risk, so the replacement term choice shift has been suggested.[4] The importance of group polarization is significant as it helps explain group behavior in a variety of real-life situations. Examples of these situations include public policy, terrorism, college life, and violence. History and origins[edit] In early studies, the risky-shift phenomenon was measured using a scale known as the Choice-Dilemmas Questionnaire. “Mr. ____Place a check here if you think Mr. Controversy[edit]

What is the new sociology of Ideas ? A Discussion with Charles Camic and Neil Gross - Transeo Review Humanities are not so common an object of investigation for social scientists. Other disciplines (intellectual history, political science or even philosophy) tend to challenge the accounts produced by sociologists. Moreover, the sophistication of disciplines such as philosophy or economic analysis can sometimes be a barrier for sociologists working on them. Could you briefly describe your personal trajectory, your education and past interests, and the reasons why you turned to the sociology of ideas ? Charles Camic : Although I “turned” about 10 years ago to using the expression “sociology of ideas” to describe my work, I’ve actually been doing research in this vein onward from my time in graduate school. When I was a sociology graduate student at the University of Chicago in the mid-1970s, my initial interests were social theory and the sociology of education. Neil Gross : You coined the phrase “new sociology of ideas” to describe the research field your works aim to contribute to.

Cousins of Neanderthals Left DNA in Africa, Scientists Report The geneticists reached this conclusion, reported on Thursday in the journal Cell, after decoding the entire genome of three isolated hunter-gatherer peoples in Africa, hoping to cast light on the origins of modern human evolution. But the finding is regarded skeptically by some paleoanthropologists because of the absence in the fossil record of anything that would support the geneticists’ statistical calculations. Two of the hunter-gatherers in the study, the Hadza and Sandawe of Tanzania, speak click languages and carry ancient DNA lineages that trace to the earliest branchings of the human family tree. The third group is that of the forest-dwelling pygmies of Cameroon, who also have ancient lineages and unusual blood types. The geneticists, led by Joseph Lachance and Sarah A. Among the DNA sequences special to pygmies, Dr. The genomes of the pygmies and the Hadza and Sandawe click-speakers contained many short stretches of DNA with highly unusual sequences. Dr. Dr.

Hidden profiles History[edit] In 1981 two researchers, Garold Stasser and William Titus, set out to challenge strongly-held beliefs about group decision making. The researchers attempted to use a number of formal models to identify what would happen when people are not fully informed.[1]:304 One of these was the persuasive argument theory (PAT). The theory, in this case, would state that polarization of judgments is due to culturally pooled arguments. Causes[edit] Hidden profiles occur when some information is shared among group members and other pieces of information remain unshared. One issue with hidden profiles is the time dedicated to discussion. See also[edit] Further reading[edit] Stasser, G. (1988). References[edit] ^ Jump up to: a b c Stasser, G.; Titus, W. (2003). Content analysis Content analysis is "a wide and heterogeneous set of manual or computer-assisted techniques for contextualized interpretations of documents produced by communication processes in the strict sense of that phrase (any kind of text, written, iconic, multimedia, etc.) or signification processes (traces and artifacts), having as ultimate goal the production of valid and trustworthy inferences."[1] On the other side, Content Analysis can also study traces (documents from past times) and artifacts (non-linguistic documents), which come from communication processes in a broad sense of that phrase - commonly referred to as "signification" in Semiotics (in the absence of an intentional sender, semiosis is developed by abduction).[1] Over the years, content analysis has been applied to a variety of scopes. In recent times, particularly with the advent of mass communication, content analysis has known an increasing use to deeply analyse and understand media content and media logic. Description[edit]

Group behaviour Group behaviour (or group behavior) in sociology refers to the situations where people interact in large or small groups. The field of group dynamics deals with small groups that may reach consensus and act in a coordinated way. Groups of a large number of people in a given area may act simultaneously to achieve a goal that differs from what individuals would do acting alone (herd behaviour). Special forms of large group behaviour are: Crowd "hysteria"Spectators - when a group of people gathered together on purpose to participate in an event like theatre play, cinema movie, football match, a concert, etc.Public - exception to the rule that the group must occupy the same physical place. Swarm intelligence is a special case of group behaviour where group members interact to fulfill a specific task. Why people join groups[edit] People join groups for a multitude of reasons. Organizations typically form groups to accomplish work related tasks. Defining characteristics[edit] See also[edit]

Communication in small groups Group communication[edit] The first important research study of small group communication was performed in front of a live studio audience in Hollywood California by social psychologist Robert Bales and published in a series of books and articles in the early and mid 1950s .[5][6][7] This research entailed the content analysis of discussions within groups making decisions about "human relations" problems (i.e., vignettes about relationship difficulties within families or organizations). Bales made a series of important discoveries. First, group discussion tends to shift back and forth relatively quickly between the discussion of the group task and discussion relevant to the relationship among the members. Linear phase model[edit] The most influential of these discoveries has been the latter; the linear phase model. Idea development[edit] Social influence in groups[edit] Work relevant to social influence in groups has a long history. Conflict resolution[edit] Group decisions[edit]