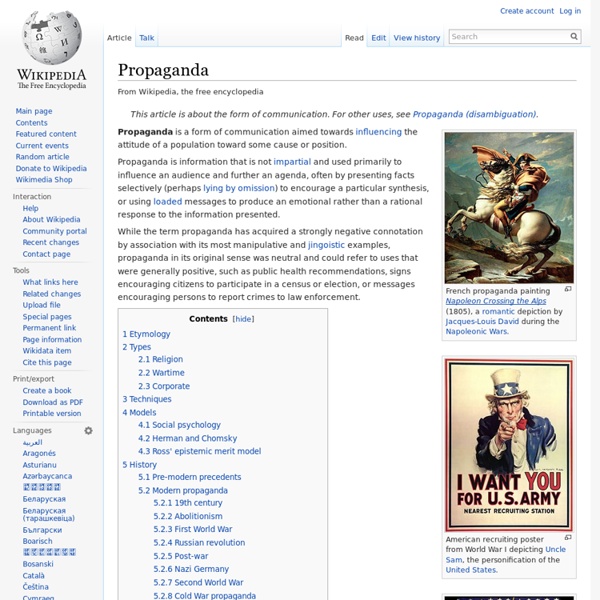 Propaganda is a form of communication aimed towards influencing the attitude of a population toward some cause or position. While the term propaganda has acquired a strongly negative connotation by association with its most manipulative and jingoistic examples, propaganda in its original sense was neutral and could refer to uses that were generally positive, such as public health recommendations, signs encouraging citizens to participate in a census or election, or messages encouraging persons to report crimes to law enforcement. Etymology[edit] From the 1790s, the term began being used also for propaganda in secular activities.[2] The term began taking a pejorative connotation in the mid-19th century, when it was used in the political sphere.[2] Types[edit] Defining propaganda has always been a problem. According to historian Zbyněk Zeman, propaganda is defined as either white, grey or black. US Office for War Information poster implying that working less helped the Axis powers. Related:  Crowd Manipulation • AT

Gatekeeping (communication) Gatekeeping is the process through which information is filtered for dissemination, whether for publication, broadcasting, the Internet, or some other mode of communication. The academic theory of gatekeeping is found in multiple fields of study, including communication studies, journalism, political science, and sociology.[1] It was originally focused on the mass media with its few-to-many dynamic but now gatekeeping theory also addresses face-to-face communication and the many-to-many dynamic inherent in the Internet. The theory was first instituted by social psychologist Kurt Lewin in 1943.[2] Gatekeeping occurs at all levels of the media structure — from a reporter deciding which sources are chosen to include in a story to editors deciding which stories are printed or covered, and includes media outlet owners and even advertisers. Individuals can also act as gatekeepers, deciding what information to include in an e-mail or in a blog, for example.

The Protocols of the Elders of Zion The Protocols of the Elders of Zion or The Protocols of the Meetings of the Learned Elders of Zion is an antisemitic hoax purporting to describe a Jewish plan for global domination.[1] It was first published in Russia in 1903, translated into multiple languages, and disseminated internationally in the early part of the 20th century. Henry Ford funded printing of 500,000 copies that were distributed throughout the US in the 1920s. Adolf Hitler was a major proponent. It was studied, as if factual, in German classrooms after the Nazis came to power in 1933, despite having been exposed as fraudulent by The Times of London in 1921. The historian Norman Cohn suggested that Hitler used the Protocols as his primary justification for initiating the Holocaust—his "warrant for genocide".[2] Creation The Protocols is a fabricated document purporting to be factual. Sources employed Literary forgery Maurice Joly The Protocols 1–19 closely follow the order of Maurice Joly's Dialogues 1–17. Hermann Goedsche

Orwellian "Orwellian" is an adjective describing the situation, idea, or societal condition that George Orwell identified as being destructive to the welfare of a free and open society. It denotes an attitude and a brutal policy of draconian control by propaganda, surveillance, misinformation, denial of truth, and manipulation of the past, including the "unperson" – a person whose past existence is expunged from the public record and memory, practised by modern repressive governments. Often, this includes the circumstances depicted in his novels, particularly Nineteen Eighty-Four.[1][verification needed] Nineteen Eighty-Four uses themes from life in the Soviet Union and wartime life in Great Britain as sources for many of its motifs.[2][3] Orwell's ideas about personal freedom and state authority developed when he was a British colonial administrator in Burma. This often brought him into conflict with literary peers such as W.H. Meanings[edit] Big Brother[edit] Political language[edit] See also[edit]