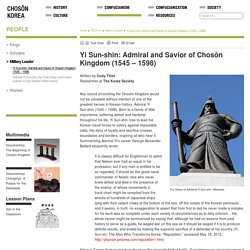 Born to a family of little importance, suffering defeat and hardship throughout his life, Yi Sun-shin rose to lead the Korean naval forces to victory against impossible odds. His story of loyalty and sacrifice crosses boundaries and borders, inspiring all who hear it. Summarizing Admiral Yi’s career George Alexander Ballard eloquently wrote: Admiral Yi even finds praise from those on the opposite field of battle. Life and Confucian Military Officer Born into an aristocratic (yangban) family on April 28, 1545 CE, Yi Sun-shin’s parents began the boy’s education in hopes that he would become a great scholar. His first assignment sent him to the northern Korean border to defend against the occasional marauding nomads. 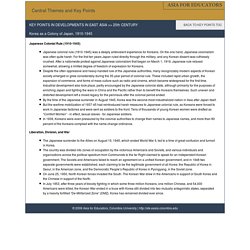 On the one hand, Japanese colonialism was often quite harsh. For the first ten years Japan ruled directly through the military, and any Korean dissent was ruthlessly crushed. After a nationwide protest against Japanese colonialism that began on March 1, 1919, Japanese rule relaxed somewhat, allowing a limited degree of freedom of expression for Koreans. The Imjin War - Haengju Mountain Fortress on the River of Hell. Published in Transactions of the Branch of the Royal Asiatic Society 85 (2010): 29-35. 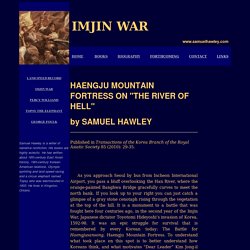 As you approach by bus from , you pass a bluff overlooking the Han River, where the orange-painted gracefully curves to meet the north bank. If you look up to your right you can just catch a glimpse of a gray stone cenotaph rising through the vegetation at the top of the hill. It is a monument to a battle that was fought here four centuries ago, in the second year of the Imjin War, Japanese dictator Toyotomi Hideyoshi’s invasion of , 1592-98. It was an epic struggle for survival that is remembered by every Korean today: The Battle for Haengjusansong, Haengju Mountain Fortress. To understand what took place on this spot is to better understand how Koreans think, and what motivates “Dear Leader” Kim Jong-il and his maddeningly recalcitrant compatriots to the North. Assassin of Kim Gu Had Links Both to U.S. and to Terror Unit-INSIDE Korea JoongAng Daily. Assassin of Kim Gu Had Links Both to U.S. and to Terror Unit Sept 05,2001 Ahn Doo-hee, who assassinated Kim Gu, president of Korea's Interim Government in Shanghai during Japanese colonial rule, was an agent for both the U.S.

Counter Intelligence Corps and an ultra-right terrorist group known as "Baekuisa," a declassified document of the U.S. National Archives and Records Administration showed. Hyojong of Joseon. King Hyojong (3 July 1619 – 23 June 1659) was the seventeenth king of the Joseon Dynasty of Korea from 1649 to 1659. 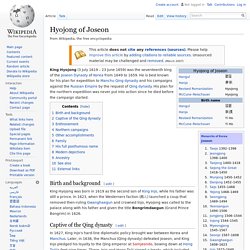 He is best known for his plan for expedition to Manchu Qing dynasty and his campaigns against the Russian Empire by the request of Qing dynasty. His plan for the northern expedition was never put into action since he died before the campaign started. Birth and background[edit] King Hyojong was born in 1619 as the second son of King Injo, while his father was still a prince. In 1623, when the Westerners faction (西人) launched a coup that removed then-ruling Gwanghaegun and crowned Injo, Hyojong was called to the palace along with his father and given the title Bongrimdaegun (Grand Prince Bongrim) in 1626. 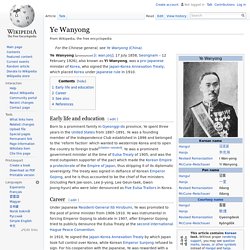 Early life and education[edit] Born to a prominent family in Gyeonggi-do province, Ye spent three years in the United States from 1887–1891. Ye was a founding member of the Independence Club established in 1896 and belonged to the ‘reform faction’ which wanted to westernize Korea and to open the country to foreign trade[citation needed].

Korean ruler. Populist Collaborators The Ilchinhoe and the Japanese Colonization of Korea, 1896–1910. An empire invites local collaborators in the making and sustenance of its colonies. 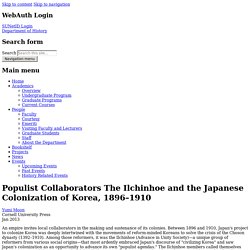 Between 1896 and 1910, Japan's project to colonize Korea was deeply intertwined with the movements of reform-minded Koreans to solve the crisis of the Choson dynasty (1392–1910). Among those reformers, it was the Ilchinhoe (Advance in Unity Society)—a unique group of reformers from various social origins—that most ardently embraced Japan's discourse of "civilizing Korea" and saw Japan’s colonization as an opportunity to advance its own "populist agendas. 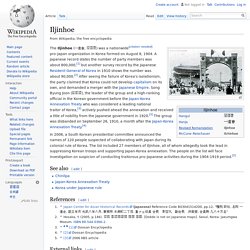 A Japanese record states the number of party members was about 800,000,[1] but another survey record by the Japanese Resident-General of Korea in 1910 shows the number was about 90,000.[2] After seeing the failure of Korea's isolationism, the party claimed that Korea could not develop capitalism on its own, and demanded a merger with the Japanese Empire. Ldpd 6496549. Tonghak Rebellion KoreanHistory.info Korean History. The Tonghak (Donghak) Rebellion 1894 동학농민운동 Tonghak founder Ch'oe Che-u In the 1860s, an indigenous religion, Tonghak (동학, 東學,Eastern Learning), which combined such aspects as the meditation of Buddhism, ethics of Confucianism, primal nature of Shamanism, Taoism cultivation of energy and the personal God of Catholicism to oppose 'Western Learning' (Catholicism) arose from the indignation of the lower classes of yangban (ruling aristocratic class) oppression and foreign influence in Korea, especially Christian missionaries and Japanese imports . 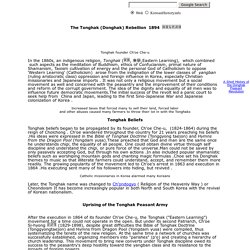 It was not only a religious movement but a social movement as well and concerned with the peasantry and the improvement of their conditions and reform of the corrupt government. Righteous Army. This article is about resistance forces during various foreign occupations of Korea. 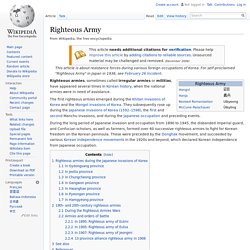 For self-proclaimed "Righteous Army" in Japan in 1936, see February 26 Incident. Pied-Noir. Pied-Noir (French pronunciation: ​[pjenwaʁ], Black-Foot), plural Pieds-Noirs, is a term referring to people of French and other European (usually Spanish, Italian, Portuguese or Maltese) ancestry who were born or lived in French North Africa, namely French Algeria, the French protectorate in Morocco, or the French protectorate of Tunisia, often for generations, until the end of French rule in North Africa between 1956 and 1962. 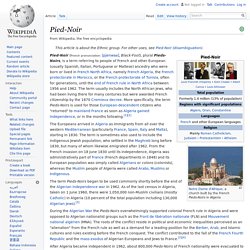 The term usually includes the North African Jews, who had been living there for many centuries but were awarded French citizenship by the 1870 Cremieux decree. More specifically, the term Pieds-Noirs is used for those European-descendent citizens who "returned" to mainland France as soon as Algeria gained independence, or in the months following.[1][2] The Europeans arrived in Algeria as immigrants from all over the western Mediterranean (particularly France, Spain, Italy and Malta), starting in 1830. Ye Wanyong. Gusts Of Popular Feeling: Korean towns burned by the Japanese, Canadians and Samil. Today is the 88th anniversary of the Samil (3.1) independence movement. For a description of the uprising published a year later, in 1920, Canadian journalist F.A. Mckenzie's Korea's Fight For Freedom can be found online here.

KOREANS APPEAL FOR AMERICAN AID - Present to American Minister in China a Letter Setting Forth Their Nation's Wrongs. CHARGE TYRANNY BY JAPAN Ask That Liberty Formerly Enjoyed for 4,000 Years Be Restored to Kingdom. Used Korea as Pretext. Opium Evil-Encou. Gusts Of Popular Feeling: An opportunist at the wrong time. Yi Wan-yong and family Andrei Lankov's latest column in the Korea Times is about Yi Wan-yong, and has a lot of details about his life I was unaware of. Lankov describes him thusly: He was an opportunist, pure and simple: smart, to be sure, but always looking for opportunities to increase his power and, in later years, his fortune.

Born in 1858 into a poor country gentry family, he was adopted by a more prosperous relative and was able to take the state exams and join the bureaucracy. Some more details: Kojong Facts. Kojong (1852-1919) was the twenty-sixth king of the Yi dynasty of Korea. He ascended the shaky Korean throne at the age of 12 and attempted in vain to defend the kingdom from external encroachments. Kojong was the second son of Húngsón Taewóngun, whose consort was Myóngsóng Hwanghu, or Queen Min. Though Kojong ascended the throne in 1863, when King Ch'óljong died without an heir apparent, his father exercised the governmental power as the imperial regent for 10 years. Korean regent. Korean ruler. Itō Hirobumi. In 1885 he became Japan's first Prime Minister, an office his constitutional bureau had introduced. He went on to hold the position four times, and wielded considerable power even out of office as the occasional head of Emperor Meiji's Privy Council. A monarchist, Itō favoured a large, bureaucratic government and opposed the formation of political parties.

Empire of Japan. From Metapedia. Korea under Japanese rule. Korea under Japanese rule. 20th CENTURY: Korea as a Colony of Japan, 1910-1945. Yeolha Ilgi. Yeongjo of Joseon. Toyotomi Hideyoshi. Toyotomi Hideyoshi (豊臣 秀吉? Yi Sun-sin. Ural–Altaic languages. Ural–Altaic, also Uralo-Altaic or Uraltaic, is an obsolete language-family proposal uniting the Uralic and Altaic languages. Seowon. Im Ju Hwan - The.Return Of Shim Chung - Part1. The Story of Sim Cheong. Telling Tales from Southeast Asia and Korea. Once upon a time, there was a girl, Shim Cheong. Her mother died when she was born. Her father did not have a job because he was blind. So from her childhood, Shim Cheong had to work to make money. One day, Shim Cheong was late coming home from work. So her father went out for her. Dalit. Dongmyeong of Goguryeo. Goryeo. Jindeok of Silla. Queen Seondeok of Silla. Seongjong of Goryeo.