How Science Can Teach You to Easily Spot a Liar 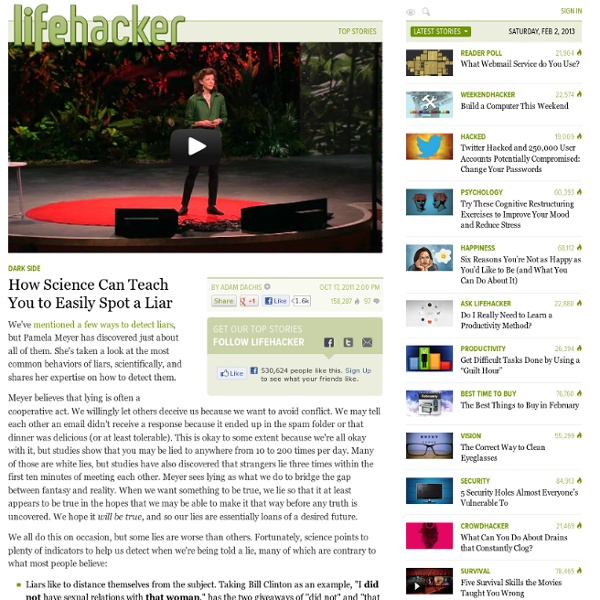 The psychopath in us all - Science Show - 15 October 2011 [Excerpt from The Silence of the Lambs] Psychopaths are known to do well as CEOs, as big bosses of big business, are they not? Well, Alan Saunders says no, or it least they did so in The Philosopher's Zone on ABC Radio National, saying you need to be organised, not just ruthless as a captain of industry. Well, you're about to hear how there is a spectrum of psychopathy. Adrian Raine: The seeds of sin are sown quite early on in life. A critical part of this limbic system is the amygdala, and there is an 18% reduction in the volume of the amygdala in adult psychopaths. That's adult psychopaths, but what about young children? One type of offender are the spouse abusers. Another form of crime is white-collar crime, and I want to clarify that these data, unlike the others, are not published yet, so I want to be very, very cautious about their presentation. We want to help children and families. Marc Abrahams, audience member: Marc Abrahams from Improbable Research.

When you talk too much for Twitter Involving Physicians in Military Interrogations A recent New England Journal of Medicine article questions the ethics of psychiatrists being involved in interrogations. In 2006 the American Psychiatric Association (APA), the American Medical Association (AMA), and the American Psychological Association (APA) issued statements that it is unethical for doctors and psychologists to be directly involved in the interrogation process. Directly involved also includes viewing the interrogation with the “intention of intervening.” In 2006, the military outlawed harsh interrogation techniques such as waterboarding, hooding, and using military dogs. Some military psychologists have argued that they should be involved to make sure that the detainees and prisoners are treated well. Many physicians believe that treating prisoners well, being kind to them is much more effective than harsh interrogation or even other more mild but aversive interrogation techniques. Reference J.

How Friends Ruin Memory: The Social Conformity Effect | Wired Science  Humans are storytelling machines. We don’t passively perceive the world – we tell stories about it, translating the helter-skelter of events into tidy narratives. This is often a helpful habit, helping us make sense of mistakes, consider counterfactuals and extract a sense of meaning from the randomness of life. But our love of stories comes with a serious side-effect: like all good narrators, we tend to forsake the facts when they interfere with the plot. We’re so addicted to the anecdote that we let the truth slip away until, eventually, those stories we tell again and again become exercises in pure fiction. Just the other day I learned that one of my cherished childhood tales – the time my older brother put hot peppers in my Chinese food while I was in the bathroom, thus scorching my young tongue – actually happened to my little sister. The reason we’re such consummate bullshitters is simple: we bullshit for each other. Here’s where the fMRI data proved useful.

The State of Mental Healthcare in Prison A new report by Policy Exchange reveals over a third of spending on mental health services in prison is wasted and calls for a drastic overhaul in treating mental health in prisons, including mandatory training for prison officers. Mental healthcare in prisons is widely overlooked as being a problem in the justice system, with overcrowding and high costs trumping mental health for column inches. Yet experts agree that there in a link between mental illness and reoffending in the community. In the latest Policy Exchange report, Out of Sight, Out of Mind, leading experts say that it is time policy makers woke up to the realities of mental healthcare in prisons, and the report authors suggest that only a small reduction in re-offending rates would make a tripling of the prison mental healthcare budget cost effective. Our prison population is at its highest ever. There is significantly less public sympathy for prisoners with mental illness than for those in the community. Reference

Psychiatry Discriminates Against People with Borderline Personality Disorder Borderline Personality Disorder (BPD) is characterized by a pattern of unstable relationships, a self-image that is always changing, and poor impulse control. The person suffering from BPD fears abandonment and will go to any lengths to prevent this, including threats of suicide. Self-harm is a characteristic. There may be no other psychiatric diagnosis more laden with stereotypes and stigma than Borderline Personality Disorder. People who live with this label — the majority being female — often have problems accessing good mental health services. (1) Unlike the stigmatization that society puts on mental illness, the stigma associated with BPD often comes from mental health professionals and their patronizing attitudes. Many psychiatrists will not treat BPD patients, or they may limit the number of BPD patients in their practice or drop them as ”treatment resistant.” “Why would psychiatry and psychology turn so viciously against people they call mentally disordered? References

Empathy – How Much is Too Much? The physician-patient relationship is the cornerstone to quality medical care. A key component to this relationship is physician empathy — the ability to understand the patient’s experiences and feelings and view the world from the patient’s perspective. Empathy is so important in this day and age that medical and other health care professional schools are instituting empathy training programs and establishing empathy-related learning objectives. But, a recent study reveals that physicians might benefit from decreasing their empathy response and improve clinical outcomes. Empathy certainly plays a positive role in interpersonal relationships. In health care, empathy is associated with many positive attributes, including dutifulness, prosocial behavior, moral reasoning, reduced malpractice litigation, improved history taking and physical examination, patient satisfaction, physician satisfaction, improved therapeutic relationships, and overall improved clinical outcomes. References

Social Isolation and Mental Illness Think about what it would be like to spend most of your time alone because being around other people is just too difficult. You feel that others are judging you for your mental illness, and so you are scared to face the world. You withdraw to avoid this stigmatization. This social withdrawal is emotionally very costly. But this is a two-way street — the mentally ill withdraw from society–society withdraws from them. An Australian survey reported that two-thirds of people affected by a mental illness feel lonely “often” or “all of the time”. Social relationships are important for anyone in maintaining health, but for the mentally ill it is especially important. People with severe mental illness are probably the most isolated social group of all. It is sometimes the case that the severely mentally ill person becomes homeless. Another reason the person with mental illness may experience social isolation is the nature of their mental illness. References

Medicine and the Law – Part 6: Third Party Liability Our series on Medicine and Law is starting to wind down. We’ve covered lots of topics including contract and consent, malpractice, causation, informed consent, and abandonment. Now we will talk about third-party liability. Third party liability means exactly what it says — that a different party other than the physician or the patient hold liability for an outcome. The most common form of third party liability in the medical profession is when a patient is denied coverage by the insurance company for a recommended procedure. Many states now have laws that guarantee the right to appeal an insurance company decision in the form of an independent review. There is however controversy about the extent a physician is legally or ethically obligated to be involved in the appeal process. One reason that a physician may not want to advocate for a patient against an insurance company or managed care organization is for the fear of retaliation by the insurer.