Radio audience measurement. Diary surveys Unlike television audience surveys (which mostly use peoplemeters these days, even in developing countries, radio audiences are still measured with diaries. 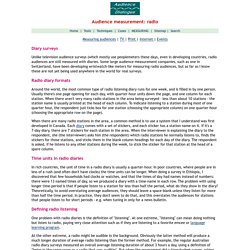 Some large audience measurement companies, such as one in Switzerland, have been developing wristwatch-like meters for measuring radio audiences, but as far as I know these are not yet being used anywhere in the world for real surveys. Radio diary formats. Media Planning & Buying Calculators;Reach, Frequency, GRP, TRP. GRPs, TRPs, Reach and Frequency. 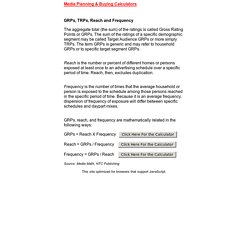 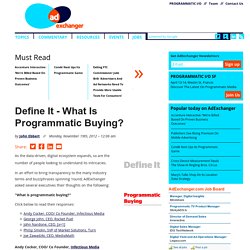 While it includes RTB it also includes non RTB methods and buy types such as Facebook Ads API and the Google Display Network. Programmatic also implies the use of multi sourced data signals to inform targeting and optimization decisions. An increasing share of online display advertising is moving towards programmatic due to its inherent efficiency (both workflow and performance).

The majority of inventory available via programmatic is non-guaranteed, auction traded during the ad call although we expect to see more guaranteed reserved 'premium' inventory available in the future. George John, CEO, Rocket Fuel. Marketers should set production budgets or pay the consequences. This post is by Clive Duncan a Senior Consultant at TrinityP3. 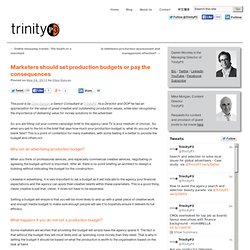 As a Director and DOP he has an appreciation for the value of great creative and outstanding production values, while also recognising the importance of delivering value for money solutions to the advertiser. So you are filling out your comms campaign brief to the agency (and TV is your medium of choice). So when you get to the bit in the brief that says how much your production budget is, what do you put in the blank field? This is a point of contention for many marketers, with some feeling it is better to provide the budget and others not.

Why set an advertising production budget? When you think of professional services, and especially commercial creative services, negotiating or agreeing the budget upfront is important. Likewise in advertising, it is very important to set a budget as it will indicate to the agency your financial expectations and the agency can apply their creative talents within these parameters. Media Rebate Follies Continue. The Association of National Advertisers (ANA) conducted a survey among 180 members with regard to the prominence of media rebates within the U.S. media market. 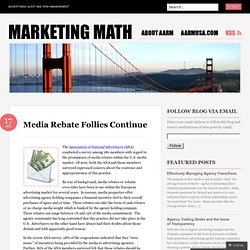 Of note, both the ANA and those members surveyed expressed concern about the existence and appropriateness of this practice. By way of background, media rebates or volume over-rides have been in use within the European advertising market for several years. In essence, media properties offer advertising agency holding companies a financial incentive tied to their overall purchases of space and or time. Publications WFA: End Secrecy Surrounding Agency Media Rebates 03/22. A new survey by The World Federation of Advertisers indicates that media rebates -- payments to media agencies in return for spending client money with media owners -- are provided most often for digital transactions, followed by print, TV and outdoor. 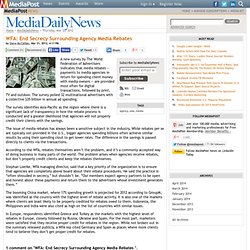 The survey polled 32 multinational advertisers with a collective $35 billion in annual ad spending. Publications Wanted Dead and Alive: Schrodinger's Rebate 03/13/2014. Are there rebates in the giant U.S. media market? 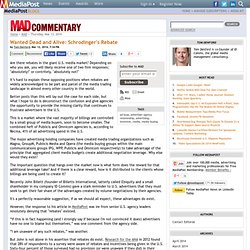 Depending on who you ask, you will likely receive one of two firm responses; "absolutely! " or contritely, "absolutely not! " Media buying: a flawed system? Forget Don Draper. 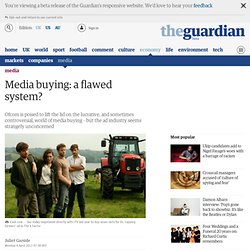 Global News. Significant proportion returned to advertisers as free spaceSome advertisers reduce agency fees to compensateAdvertisers don't believe all rebates are returned The World Federation of Advertisers (WFA) has released the results of its latest survey into the level and distribution of media rebates in Europe, Asia Pacific and Latin America. 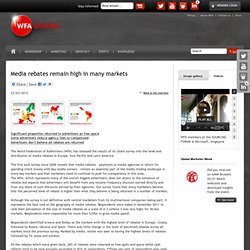 The first such survey since 2009 reveals that media rebates – payments to media agencies in return for spending client money with key media owners – remain an essential part of the media trading landscape in many key markets and that marketers need to continue to push for transparency in this area. The WFA, which represents many of the world's biggest advertisers, does not object to the existence of rebates but expects that advertisers will benefit from any volume/frequency discount earned directly and from any share of such discounts earned by their agencies. Respondents identified Colombia, Mexico and Brazil as rebate hot spots in Latin America. 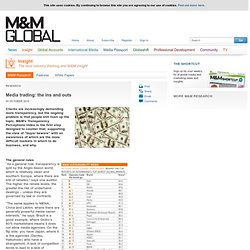 M&M’s Transparency Perceptions Index is the first step designed to counter that, supporting the view of “buyer beware” with an awareness of which are the more difficult markets in which to do business, and why. The general rules “As a general rule, transparency is split by the Anglo-Saxon world, which is relatively clean and southern Europe, where there are lots of rebates,” says one auditor.

“The same applies to MENA, China and LatAm, where there are generally powerful media owner interests,” he says. Emerging markets can be tricky to judge. Established markets are more likely to have legislation. The impact of media research. This is something that’s problematic for emerging markets. France.