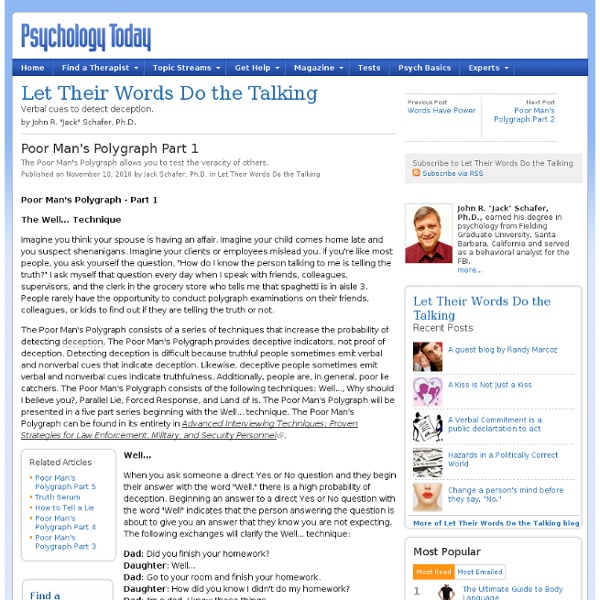 Poor Man's Polygraph - Part 1 The Well... Technique Imagine you think your spouse is having an affair. Imagine your child comes home late and you suspect shenanigans. Imagine your clients or employees mislead you. The Poor Man's Polygraph consists of a series of techniques that increase the probability of detecting deception, The Poor Man's Polygraph provides deceptive indicators, not proof of deception. Well... When you ask someone a direct Yes or No question and they begin their answer with the word "Well," there is a high probability of deception. Dad : Did you finish your homework? Dad need not wait for his daughter to finish her answer because he knew by her use of the word "Well" that she was about to give him an answer she knew he was not expecting. In another example, I interviewed a person who I thought witnessed a murder. Me : Did you see what happened? I asked the witness a direct Yes or No question to which he knew I expected a "Yes" answer.

Confidence tricks Techniques > Confidence tricks Articles | Examples | So what There is, according to legend, a sucker born every day, and of course there are many confidence tricksters around who are all too ready to relieve them of their wealth. Two main levers of confidence tricksters are gullibility and greed. They will exploit the incautious and naive and offer something for nothing as an appeal to our natural desires. Articles Gullibility: Are there easy targets? Examples There are more con tricks than days in the year. The Antique Toy: Cheating the cheater. So what So for goodness sake be careful where you place your trust. Also be very cautious of things that are more ordinary. And of course don't stoop to harming others in such ways as these. See also Confidence tricks links

Psychological manipulation Psychological manipulation is a type of social influence that aims to change the perception or behavior of others through underhanded, deceptive, or even abusive tactics.[1] By advancing the interests of the manipulator, often at another's expense, such methods could be considered exploitative, abusive, devious, and deceptive. Social influence is not necessarily negative. For example, doctors can try to persuade patients to change unhealthy habits. Social influence is generally perceived to be harmless when it respects the right of the influenced to accept or reject and is not unduly coercive. Depending on the context and motivations, social influence may constitute underhanded manipulation. Requirements for successful manipulation[edit] According to psychology author George K. Consequently, the manipulation is likely to be accomplished through covert aggressive (relational aggressive or passive aggressive) means.[2] How manipulators control their victims[edit] According to Braiker[edit]

SCHOPENHAUER'S 38 STRATAGEMS, OR 38 WAYS TO WIN AN ARGUMENT Arthur Schopenhauer (1788-1860), was a brilliant German philosopher. These 38 Stratagems are excerpts from "The Art of Controversy", first translated into English and published in 1896. Carry your opponent's proposition beyond its natural limits; exaggerate it. The more general your opponent's statement becomes, the more objections you can find against it. The more restricted and narrow his or her propositions remain, the easier they are to defend by him or her. (abstracted from the book:Numerical Lists You Never Knew or Once Knew and Probably Forget, by: John Boswell and Dan Starer) 8 Clever Bandits Victor Lustig: the criminal who managed to “sell” the Eiffel Tower, twice! In 1925 a con artist called Victor Lustig managed to sell the Eiffel tower, not just once, but twice within two months! France had just recovered from World War I, and Paris was booming, an excellent environment for a con artist. Lustig produced fake government stationery for him and invited six scrap metal dealers to a confidential meeting at one of the most prestigious hotel in Paris, to discuss a possible business deal. Frank Abagnale: the teenager impostor who passed over 2.5 million dollars in forged checks Frank William Abagnale, Jr. is an American security consultant best known for his history as a former confidence trickster, check forger, skilled impostor, and escape artist. Anthony J. In an elaborate robbery scheme, a crook robbed an armored truck outside a Bank of America branch in Monroe, Wash., by hiring decoys through Craigslist to deter authorities.

The Art of Seduction Synopsis[edit] Reception[edit] Greene considers himself a Reformed Rake, one of the types of seducers mentioned in the book,[14] and states that he used the book's techniques to attract his current girlfriend, Anna Biller.[19] He is working to develop a television series based on the book.[12] References[edit] External links[edit] Power, Seduction and War: The Robert Greene Blog The 33 Strategies of War Reception In the book Greene reveals that "Afghanistan was rich in natural gas and other minerals and had ports on the Indian Ocean".[14] The political tales in the book are said to be "mostly foolish or just plain wrong".[15] The book has "far too many duff sentences",[5] for example: "Your goal is to blend philosophy and war, wisdom and battle, into an unbeatable blend It has sold more than 200,000 copies.[17] See also References Notes Jump up ^ Greene, Robert, "The 33 Strategies of War", Viking Adult, 2006Jump up ^ "The 33 Strategies of War, by Robert Greene". External links 33 Strategies of War interview featuring Robert Greene

The 50th Law Origins[edit] The 50th Law grew out of the friendship and mutual admiration between 50 Cent and Robert Greene.[7] Greene's book The 48 Laws of Power, which has long been a staple in the hip hop world, came to the attention of 50 Cent, who asked his manager to arrange a meeting. Greene said that he was surprised by 50 Cent's persona and was impressed by his "Zen-like calmness" and eye for strategy.[8] The two began to work on a book project that would combine their two worlds.[8][9] According to Greene, 50 Cent is an example of what Machiavelli called a New Prince, a leader who emerges in a time of chaos or turmoil and rewrites the rules.[8] According to 50 Cent, Greene's books describe the laws and strategies used by hustlers on the street, even if they might not know the "technical terms" for what they were doing.[10] Synopsis[edit] Reception[edit] References[edit] External links[edit]