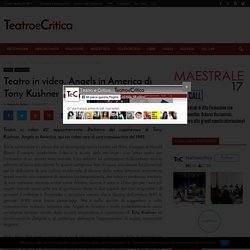 Be SpectACTive! is a European project based on audience development. Failing to Understand Together: What Is Theatre Seeking In Current Affairs? From the ‘crisis play’ to the ‘memorial play’ to the ‘Syria play,’ current affairs are doing well in theatre. 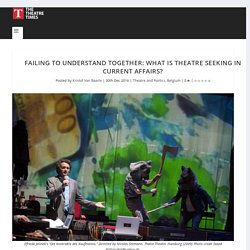 And yet this is not a matter of course for a medium that likes to invoke its slowness with regard to the flow of information that washes over us daily. But perhaps today, Kristof Van Baarle argues, we have a greater need for stories than for information. It was impossible to avoid this spring: the ‘Syria play’ conquered the theatre.

Various makers dealt in a variety of ways with the current issue of the Syria fighters. The press and the audience looked with heightened attention at the way in which these artists translated their vision to the stage. Beyond Training: The Role of Theatre Educators. The University of Michigan's "Maize & Blue on Broadway" concert honoring Brent Wagner. 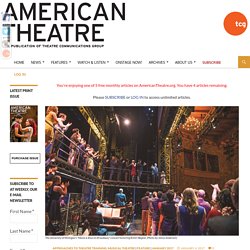 (Photo by Jenny Anderson) On May 16, 2016, hundreds of alumni of the University of Michigan’s musical theatre program gathered at the August Wilson Theatre on Broadway to celebrate Brent Wagner, the department chair, on the occasion of his retirement. Many months of planning went into the two-and-a-half-hour evening of songs, sketches, and speeches dedicated to Wagner’s three-decade career at the school. Spearheaded by Gavin Creel and Celia Keenan-Bolger, the gala concert brought alumni and current performing arts students together to perform onstage and work in the wings to honor Wagner. Monologue Archive. Auditions & Casting Calls, Talent Seeking, Advice & Tips. Open Casting Calls, Free Monologues, and Acting Auditions. 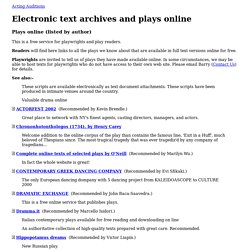 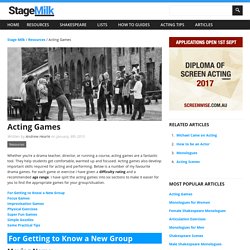 They help students get comfortable, warmed up and focused. Acting games also develop important skills required for acting and performing. Below is a number of my favourite drama games. For each game or exercise I have given a difficulty rating and a recommended age range. I have split the acting games into six sections to make it easier for you to find the appropriate games for your group/situation. For Getting to Know a New GroupFocus GamesImprovisation GamesPhysical ExercisesSuper Fun GamesSimple GoodiesSome Practical Tips. KABUKI KOOL. Japanese traditional theater explained in English. 01. Page to Stage. Should immersive theatre audiences accept greater responsibility? There was a moment during National Theatre Wales’s Bordergame when the urge to rebel was strong. 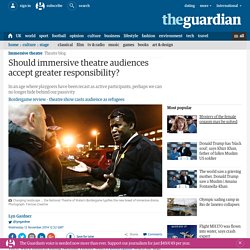 Like several others – all of us cast as refugees trying to travel from Bristol to Newport – I had been refused entry into the Autonomous Republic of Cymru for having false identity papers and was herded into a holding area. The possibility of trying to organise a rebellion, rise up against the border guards and break free crossed my mind. 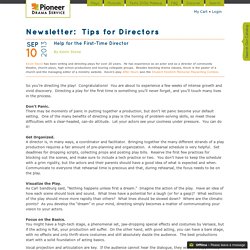 He has experience as an actor and as a director of community theatre, church plays, high school productions and touring collegiate groups. Besides teaching drama classes, Kevin is the pastor of a church and the managing editor of a ministry website. Kevin’s play After Hours won the Shubert Fendrich Memorial Playwriting Contest. Theatre lessons from Sri Lanka on post-conflict reconciliation at EU Dev Days – EurActiv.com. The first fruits of the EU’s new “cultural strategy” for external relations was on show at the Development Days conference in Brussels on Wednesday (15 June), as a theatre troupe from both warring sides in Sri Lanka showed how working together could aid in post-conflict resolution. 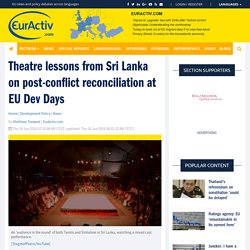 The strategy was only adopted by the European Commission last week, and must go through the Council of Ministers in November. It should finally come into play under the Malta presidency in 2017, but according to Commission officials, it is already seeing implementation – and some delivery. Indeed, as Diego Marani, from the European External Action Service candidly said on stage, “It’s an achievement the strategy is even here.