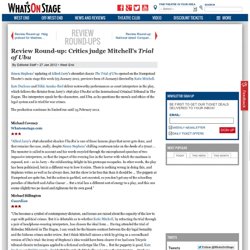 Kate Duchene and Nikki Amuka-Bird deliver noteworthy performances as court interpreters in the play, which follows the dictator from Jarry’s 1896 play Ubu Roi at the International Criminal Tribunal in The Hague. The interpreters speak for the characters, and Ubu, as he questions the morals and ethics of the legal system and is tried for war crimes. The production continues its limited run until 25 February 2012. Michael Coveney Whatsonstage.com ★★★ Michael Billington Guardian ★★★ "Ubu becomes a symbol of contemporary dictators, and issues are raised about the capacity of the law to cope with political crimes. Charles Spencer Daily Telegraph ★★ Drama InfoWeb - Glossary.

Whilst not exhaustive this glossary lists many of the technical terms specific to theatre production that you are likely to encounter in amateur theatre. 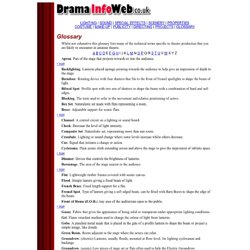 Apron . Part of the stage that projects towards or into the audience. Genet taken much too seriously - and slowly. In fact his plays are stridently camp, especially The Maids, which he originally envisaged as a drag ritual, with the two bonnes being played by adolescent boys. 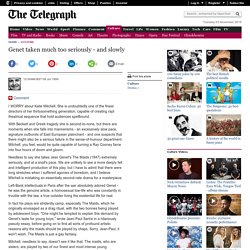 "One might be tempted to explain this demand by Genet's taste for young boys," wrote Jean-Paul Sartre in a hilariously pseudy essay, before going on to find all sorts of profound artistic reasons why the maids should be played by chaps. Sorry, Jean-Paul, it won't wash. How to act: stage stars share their acting tips. Reading this on mobile? 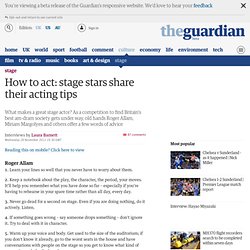 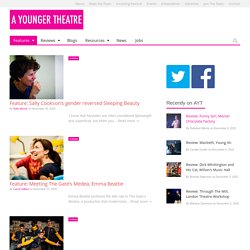 Www.playscripts.com/plays/wholeshebang.pdf. Exiles by James Joyce. Review: Kafka's Monkey ~ theatre notes. Warhorseonstage.com.s3.amazonaws.com/files/London_WarHorse_EduPack_WE.pdf. Monkeying around on the stage. Britain’s longest-serving theater critic, Michael Billington of The Guardian newspaper, is famous for not lavishing praise on his subjects easily or often. 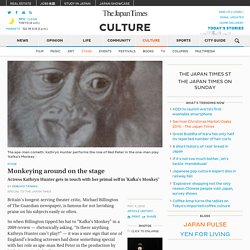 So when Billington tipped his hat to “Kafka’s Monkey” in a 2009 review — rhetorically asking, “Is there anything Kathryn Hunter can’t play?” — it was a sure sign that one of England’s leading actresses had done something special with her role as ape-man Red Peter in the production by Irish dramatist Colin Teevan. UK Theatre Web: Theatre tickets and listings for musicals, plays, opera, ballet and concerts. Homepage.smc.edu/sawoski_perviz/Stanislavski.pdf. Acting Coach Scotland. The Top Ten Problems With An Actor’s Performance. Perfectionism vs. Creativity. “Take pains, be perfect” – so says Bottom, the least able actor in history, who is only able to play the ass, when he actually becomes his character.Â Perfect isn’t a good target, a good goal or objective for the actor.Â It does not allow for spontaneity, divergence and diversity.Â Whilst we strive for a strong, supple and healthy body, perfection will lead us towards Narcissism.Â Whilst we strive for vocal production that is powerful with resonant tone, perfection will make us compulsive about ourselves.Â Perfection is not the friend of the creative as it might be for the Accountant.Â Perfection is a false friend, capable of leading you away from your goals and towards a long long fall, one caused by pride. 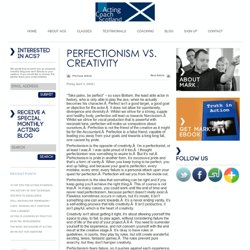 Be creative. Give up perfection. Www.blundells.org - Drama. GCSE Performance 2012 An Inspector Calls One of Miss Fordham’s groups took on the challenge of performing An Inspector Calls . All five characters in this play have a story that needs to be told and it is their various accounts that combine to tell the story of Eva Smith. My Absolute Top 10 Tips for Actors. ONE: Acting isnâ€™t pretending, itâ€™s not performing, itâ€™s being truthful in every moment on camera. 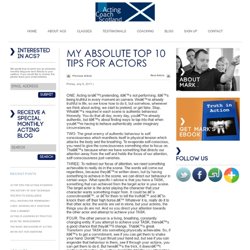 Weâ€™re already truthful in life, so we know how to do it, but somehow, whenever we think about acting, we start to pretend, or get fake. Stop. Whatâ€™s required in each scene is authentic behaviour. Acting Coach Scotland. After many years and a heavy heart, I can honestly say that character building as an activity of the actor is an unnecessary waste of time. 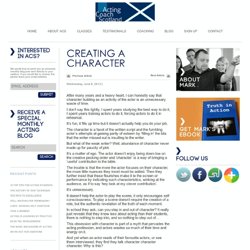 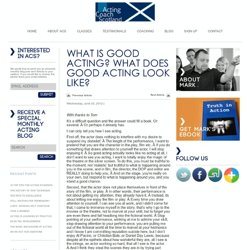 Or several. Cliff Osmond on Acting: ON ACTING: Bad Acting Habits. All bad acting stems from a similar source: the bad actors' lack of confidence or refusal to stand in their own light. By that I mean, such actors refuse to fully be themselves (the aspects of themselves called for by the script) and perform with freedom and fullness. Such actor timidity in the face of performance demands results in filling the performance void by false acting; which has many guises, masks and forms: for example not really listening to the other actors in the scene, or a refusal to be really, emotionally and personally affected by the events encountered in the scene (including the other character's dialogue), or a constant consciousness of one's own performance rather than a focus on the events of the scene, most especially the other characters/actors in the scene. Professional Actor Training and Coaching. Cut it Out, a one-act play by Trevor Suthers.

The Dreaming - a one-act play by Richard James. A Smell of Burnt Feathers, a short play by Paul Gisby. Good parts for women - Amdram.co.uk - The Amateur Theatre Discussion Board. Why are people in theatre audiences so old. Let's get physical - News. Martyn Jacques: The Cabinet of Dr Caligari. HAHN-BIN: The Renaissance of Classical Music - Soho Theatre. Avant-pop classical violinist HAHN - BIN has become a revolutionary force in music with his dazzling performances of classical music as performance art. Theatre & performing arts blog.