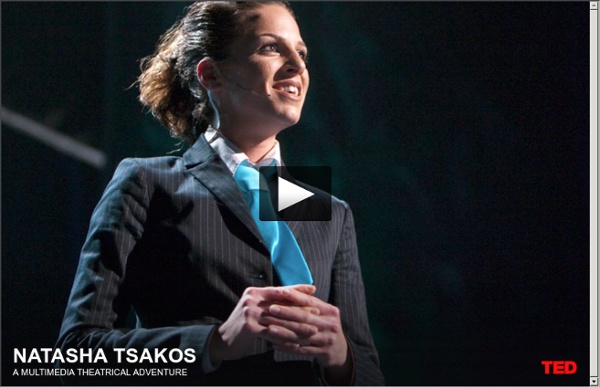 so good to see an individual so passionate about her craft. the depth she has created in her character is amazing. by shaunaobrien Feb 10

Natasha seems so passionate in her art. It's great how she brings technology to art and really expands the theatre. It's fascinating how she uses the sounds and video as actors to work with. by katetunney Feb 4

I thought that the way Natasha used technology in her performance piece was a good example of how different forms of performance and media can make you interpret the artform. She was able to establish a connection with the audience and the viewer and the experience was something that I had not seen before. by rorymoore Jan 27

I think that the way Nathasa as an artist wants to express herself is outstanding. She created a magic experience for her audience by using technology. It is surpricing me as I wasn't a big fan of using technology in performance arts. She is not only uses it as support, but also as her partner on the stage. This 'partnership' gives a very positive results. Well done Natasha! by patryks Jan 27

I enjoyed Natasha's use of anecdotes and how she related art, science and technology to eachother. Found it very interesting and wanted to find out more... by katieseville Jan 27

I loved her energy and use of technology. It was very interesting to watch and she really kept my interest and the interest of the crowd. by melissahersee Jan 24

I loved Natasha's cool, energetic style. Natasha's performance was as eloquent as her clear, insightful and interesting talk. by maresehickey Jan 23

I love the way she interacts with the technology. I also find it really interesting that she used to be a street performer. by fayemiller Jan 22

Quite interesting how she talked about the connection between art and science. Up wake looked pretty cool, and how it was mainly created through simple technology by helenaburns Jan 22