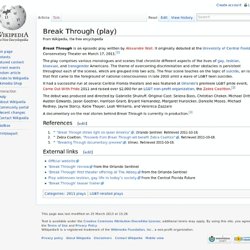 It originally debuted at the University of Central Florida Conservatory Theater on March 17, 2011. [ 1 ] The play comprises various monologues and scenes that chronicle different aspects of the lives of gay , lesbian , bisexual , and transgender Americans. The theme of overcoming discrimination and other obstacles is persistent throughout each of the scenes, which are grouped into two acts. The final scene touches on the topic of suicide , an issue that first came to the foreground of national consciousness in late 2010 amid a wave of LGBT teen suicides. It had a successful run at several Central Florida theaters and was featured at Orlando 's premiere LGBT pride event, Come Out With Pride 2011 and raised over $2,000 for an LGBT non-profit organization , the Zebra Coalition . [ 2 ] Torch Song Trilogy. Torch Song Trilogy is a collection of three plays by Harvey Fierstein rendered in three acts: International Stud , Fugue in a Nursery , and Widows and Children First! 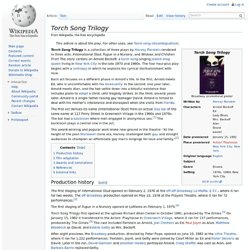 The story centers on Arnold Beckoff, a torch song -singing Jewish drag queen living in New York City in the late 1970 and 1980s. The Madness of Lady Bright. The Madness of Lady Bright is a short play by Lanford Wilson , among the earliest of the gay theatre movement. [ 1 ] It was first performed at Joe Cino 's Caffe Cino in May 1964 and went on to tour internationally, appearing in revivals to the present day. 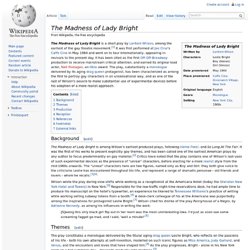 It has been cited as the first Off-Off-Broadway production to receive mainstream critical attention, and earned its original lead actor, Neil Flanagan , an Obie award. The play, substantially a monologue delivered by its aging drag queen protagonist, has been characterized as among the first to portray gay characters in an unsensational way, and as one of the last of Wilson's oeuvre to make substantial use of experimental devices before his adoption of a more realist approach. 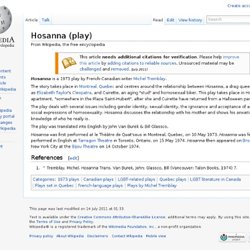 The story takes place in Montreal, Quebec and centres around the relationship between Hosanna, a drag queen dressed as Elizabeth Taylor 's Cleopatra , and Cuirette, an aging "stud" and homosexual biker. This play takes place in Hosanna's apartment, "somewhere in the Plaza Saint-Hubert", after she and Cuirette have returned from a Halloween party. [ 1 ] The play deals with several issues including gender identity, sexual identity, the ignorance and acceptance of ageing, and social expressions of homosexuality. Hosanna discusses the relationship with his mother and shows his anxieties over her knowledge of who he really is.

The play was translated into English by John Van Burek & Bill Glassco. Hosanna was first performed at le Théâtre de Quat'sous in Montreal, Quebec, on 10 May 1973. Arias with a Twist. To Hell with the Goddamn Spring. To Hell with the Goddamn Spring ( Spanish : Al diablo la maldita primavera ) is a Colombian play , based on the novel of the same name by Alonso Sánchez Baute (which won the Opera prima award in 2002). 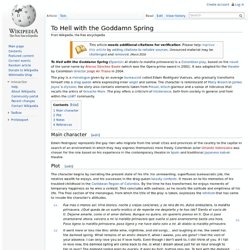 It was adapted for the theatre by Colombian director Jorge Ali Triana in 2004. The play is a monologue given by an average bureaucrat called Edwin Rodríguez Vuelvas, who gradually transforms himself into a drag queen while expressing inner angst and sorrow. The character is reminiscent of Molly Bloom in James Joyce ´s Ulysses ; the story also contains elements taken from Proust , kitsch glamour and a sense of ridiculous that recalls the antics of Groucho Marx . The play offers a criticism of intolerance , both from society in general and from within the LGBT community. Main character [ edit ] Edwin Rodriguez represents the gay men who migrate from the small cities and provinces of the country to the capital in search of an environment in which they may express themselves more freely. 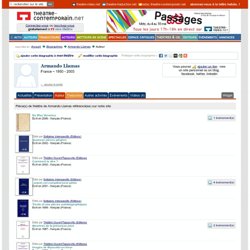 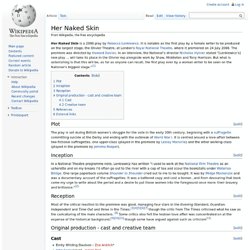 It is notable as the first play by a female writer to be produced on the largest stage, the Olivier Theatre, at London's Royal National Theatre , where it premiered on 24 July 2008. The Children's Hour (play) The Children's Hour is a 1934 stage play written by Lillian Hellman . 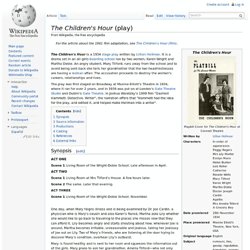 It is a drama set in an all-girls boarding school run by two women, Karen Wright and Martha Dobie. An angry student, Mary Tilford, runs away from the school and to avoid being sent back she tells her grandmother that the two headmistresses are having a lesbian affair. The accusation proceeds to destroy the women's careers, relationships and lives. The play was first staged on Broadway at Maxine Elliott's Theatre in 1934, where it ran for over 2 years, and in 1936 was put on at London's Gate Theatre Studio and Dublin's Gate Theatre . In Joshua Waletzky's 1999 film "Dashiell Hammett. Synopsis [ edit ] Body Awareness. Body Awareness is a 2008 one-act play by Annie Baker . 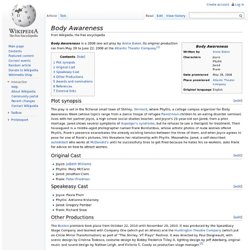 Its original production ran from May 28 to June 22, 2008 at the Atlantic Theater Company . [ 1 ] [ edit ] Plot synopsis. Stop Kiss. Stop Kiss is a play written by the American playwright Diana Son , and produced Off-Broadway in 1998 at The Public Theater in New York City . 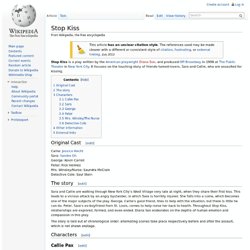 It focuses on the touching story of friends-turned-lovers, Sara and Callie, who are assaulted for kissing. Original Cast [ edit ] Callie: Jessica Hecht Sara: Sandra Oh George: Kevin Carroll Peter: Rick Holmes Mrs. Last Summer at Bluefish Cove. Last Summer at Bluefish Cove is a play by Jane Chambers. It is important in lesbian theater history as the first mainstream quality literary piece of its kind. It is the story of a dissatisfied straight woman who leaves her husband to spend some quiet time by herself and who unwittingly and naively wanders into the midst of a group of seven lesbians at the beginning of their annual beachside vacation. She falls in love with the charming leading character who, unknown to her, is dying of cancer. The friendships, the laughter, the love, the fears of being outed, the difficulties of being gay and how it affects relationships with family, children, parents and careers, the demonstrations of what the painful price could be for a gay life 30 years ago in everyday America, had never before been told with such respect.

Production history [ edit ] In 1983 Judy Miller produced Bluefish at the 750-seat Theater on the Square in San Francisco featuring Susan Sullivan as Lil, under Marshall W. Opinions & Débats: « Théâtre et homophobie », par Jean-Marie Besset. Yentl. Yentl is a play by Leah Napolin and Isaac Bashevis Singer . Based on Singer's short story "Yentl the Yeshiva Boy," it centers on a young girl who defies tradition by discussing and debating Jewish law and theology with her rabbi father. When he dies, she cuts her hair, dresses as a man, and sets out to find a yeshiva where she can continue to study Talmud and live secretly as a male named Anshel. When her study partner Avigdor discovers the truth, Yentl's assertions that she is "neither one sex nor the other" and has "the soul of a man in the body of a woman" suggest the character is undergoing a gender identity crisis, especially when she opts to remain living as Anshel for the rest of her life.

Christine Jorgensen Reveals. Christine Jorgensen Reveals is a theatrical show that depicts the 1957 one-hour interview of Christine Jorgensen by Nipsey Russell . This was her only recorded interview. [ 1 ] [ 2 ] The show begins with a brief documentary . Then, Jorgensen's entire interview is lip synched by the two actors. The show received a generally positive critical response and earned the 2006 Drama Desk Award for Unique Theatrical Experience . It has been mounted several times since its 2005 Off-Broadway production. Background [ edit ] I Am My Own Wife. I Am My Own Wife is a play by Doug Wright based on his conversations with German Charlotte von Mahlsdorf . The one-man play premiered Off-Broadway in 2003 at Playwrights Horizons . It opened on Broadway later that year.

The play was developed with Moisés Kaufman and his Tectonic Theater Project , and Kaufman also acted as director. Jefferson Mays starred in the Broadway and Off-Broadway productions, playing some forty roles. Wright received the 2004 Pulitzer Prize for Drama for the work. I Am My Own Wife (or I Am My Own Woman ) is also the English title of Charlotte von Mahlsdorf's autobiography, first issued in 1992, translated in 1995. Plot synopsis [ edit ] I Am My Own Wife is an examination of the life of German antiquarian Charlotte von Mahlsdorf, born Lothar Berfelde, who killed her father when she was a young child and survived the Nazi and Communist regimes in East Berlin as a transgender person. Productions [ edit ] Rose by Any Other Name... Rose By Any Other Name . . . is an American Romantic comedy whose plot and title are loosely based on William Shakespeare's Romeo and Juliet .

Set in America around the turn of the 21st century, it gently pokes fun at life, manners, morals as well as the tensions within the modern LGBT and Liberal Communities . It stars lesbian actress Cathy DeBuono . [ edit ] Synopsis The story follows the main characters Rose a comfortably out woman who identifies as lesbian and Anthony a decent progressive straight man who serendipitously meet and then unexpectedly find themselves falling for each other. Rose has to navigate the reaction of her friends (they aren't thrilled) and her family (they are) while Anthony too has to deal with his friends who are equally nonplussed. [ edit ] Production. The Pride at The Royal Court Theatre. 4 stars. Elizabeth Rex. M. Butterfly. M.