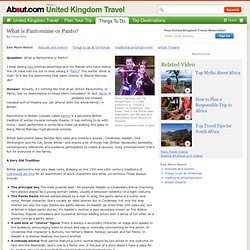 I keep seeing Pantomimes advertised and my friends who have visited the UK have told me not to miss seeing a "Panto" this winter. What is that? Is it like the pantomime that silent clowns, or Marcel Marceau did? Answer: Actually, it's nothing like that at all. British Pantomime, or Panto, has no resemblence to those silent comedians. Pantomime in Britain (usually called Panto) is a peculiarly British tradition of winter musical comedy theater. British pantomime takes familiar fairy tales and children's stories - Cinderella, Aladdin, Dick Whittington and His Cat, Snow White - and injects a bit of music hall (British Vaudeville) sensibility, contemporary references and audience participation to create a raucous, noisy entertainment that's fun for everyone in the family.

A Very Old Tradition Celebrity Guest Stars It's easy to imagine that having celebrities play key characters in Panto is relatively new - tied to our contemporary, celebrity mad culture. The British Theatre Guide: The Great British Pantomime. The Great British Pantomime Dateline: 17th January, 1999 Box office records have been broken by pantomimes in all parts of the country this year. 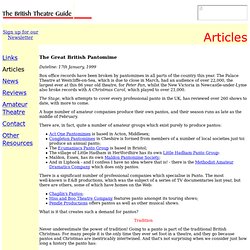 The Palace Theatre at Westcliffe-on-Sea, which is due to close in March, had an audience of over 22,000, the largest ever at this 86 year old theatre, for Peter Pan, whilst the New Victoria in Newcastle-under-Lyme also broke records with A Christmas Carol, which played to over 21,000. The Stage, which attempts to cover every professional panto in the UK, has reviewed over 260 shows to date, with more to come.

A huge number of amateur companies produce their own pantos, and their season runs as late as the middle of February. There are, in fact, quite a number of amateur groups which exist purely to produce pantos: There is a significant number of professional companies which specialise in Panto. Chaplin's Pantos; Hiss and Boo Theatre Company features panto amongst its touring shows; Pendle Productions offers pantos as well as other musical shows. Pantomime. Pantomime (informally, panto), not to be confused with the theatrical medium of mime, is a type of musical comedy stage production, designed for family entertainment. 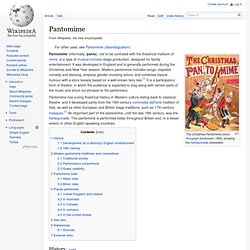 It was developed in England and is generally performed during the Christmas and New Year season. Modern pantomime includes songs, slapstick comedy and dancing, employs gender-crossing actors, and combines topical humour with a story loosely based on a well-known fairy tale.[1] It is a participatory form of theatre, in which the audience is expected to sing along with certain parts of the music and shout out phrases to the performers. Pantomime has a long theatrical history in Western culture dating back to classical theatre, and it developed partly from the 16th-century commedia dell'arte tradition of Italy, as well as other European and British stage traditions, such as 17th-century masques.[1] An important part of the pantomime, until the late 19th century, was the harlequinade.

History[edit] ITS BEHIND YOU DOT COM - The Magic of Pantomime. Shakespeare.