Shakespeare database reveals 'massive failure' in minority casting. Black and Asian actors are sidelined into “second-tier” roles in Shakespeare plays and are rarely cast as the lead, according to a major new online database of minority ethnic performers. 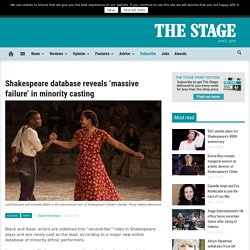 It reveals many Shakespearean supporting roles have been played twice as often by black and Asian actors as the leading roles in the corresponding play. These include Laertes and Ophelia in Hamlet, Banquo in Macbeth, and both Hero and Claudio in Much Ado About Nothing. Jami Rogers, who headed up the research by the University of Warwick, said it highlighted a “massive failure in imagination” by directors and casting directors.

Speaking to The Stage, she said the database demonstrated clear growth in the number of black, Asian and minority ethnic stage roles over the past 85 years. However, she added that since the 1980s “somehow or other casting patterns have just got stuck”. Standing Up for Playwrights and Against ‘Colorblind’ Casting. Glogin?URI= 5 Rules For White People With Black Friends. I Asked a Black Cop What He Thinks About America’s Policing Problem. It's easy to say fuck the police. 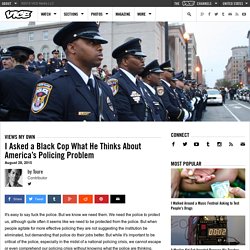 But we know we need them. We need the police to protect us, although quite often it seems like we need to be protected from the police. But when people agitate for more effective policing they are not suggesting the institution be eliminated, but demanding that police do their jobs better. But while it's important to be critical of the police, especially in the midst of a national policing crisis, we cannot escape or even comprehend our policing crisis without knowing what the police are thinking. More from VICE on America's policing crisis: A Decade After Hurricane Katrina, Police Brutality Is Still a Problem in New Orleans Police Have Killed at Least 1,083 Americans Since Michael Brown's DeathWhy It's Almost Impossible to Reform America's PoliceHow Cops Became Soldiers: An Interview with Police Militarization Expert Radley Balko Earlier this year I met a black police officer who currently serves on the force of a major American police department. 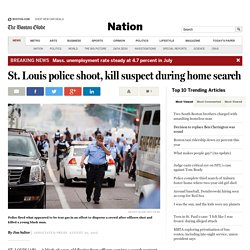 LOUIS (AP) — A black 18-year-old fleeing from officers serving a search warrant at a home in a crime-troubled section of St. Louis was shot and killed Wednesday by police after he pointed a gun at them, the city’s police chief said. The shooting drew protests throughout the day, with many of the roughly 150 people who gathered at the scene Wednesday afternoon questioning the use of deadly force. Some chanted ‘‘Black Lives Matter,’’ a mantra used a year ago after the police shooting death of 18-year-old Michael Brown in nearby Ferguson. Continue reading below Later Wednesday, police made nine arrests and used tear gas to clear a street after protesters ignored commands and threw glass bottles and rocks at officers, St. Texas cop who killed Christian Taylor fired for 'poor judgment' A white officer who fatally shot a black Texas teenager last week at a Dallas-area car dealership has been fired after making a series of troubling decisions, Arlington Police Chief Will Johnson said on Tuesday. 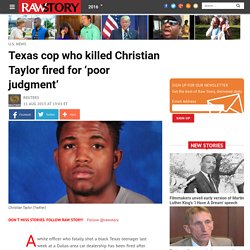 Christian Taylor, 19, became the latest unarmed black man to die at the hands of a white police officer after officials said he was seen on security surveillance tape vandalizing cars at an auto dealership in Arlington. Taylor was shot four times by Arlington police officer Brad Miller, 49, who was still undergoing training with the department, police said. Oath Keepers: Who are white militia at Ferguson protests and why are they allowed to carry guns? - Americas - World - The Independent. Dozens of demonstrators had been arrested for offences including obstructing police, throwing bottles and “obstructing the normal use of the entrances” to a court but the gun-wielding men were not detained, sparking accusations of hypocrisy. 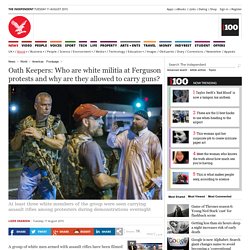 At least three members of the “Oath Keepers” group were seen on the streets of the St Louis suburb overnight. Members of the Oath Keepers walk with their personal weapons on the street during protests in Ferguson, in the early hours of 11 August Wearing bullet-proof vests, branded hats and camouflage gear, they walked among protesters after police appeared to have left the immediate area. Kayla Reed, a prominent civil rights activist involved with the Black Lives Matter movement - who had been arrested and released earlier on Monday - asked on Twitter: “Why are there men with guns and the police are doing nothing?” St Louis County Police Chief Jon Belmar called the Oath Keepers' presence "both unnecessary and inflammatory," according to NBC News. 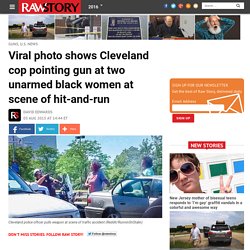 Follow Raw Story! A photo that went viral over the weekend showed an officer pulling his weapon on two black women who were at the scene of a hit and run, a spokesperson for the Cleveland Police Department explained on Monday. Campus cop says he killed unarmed black man with a shot to the head in SELF DEFENSE as he pleads not guilty to murder. Huffingtonpost. TDPS Production 'COLLIDESCOPE' to Expand National Discussion on Race in America, 11/7-14. In response to the seemingly perpetual killings of young black men in America, internationally acclaimed auteur Ping Chong and noted director and dramaturg Talvin Wilks created Collidescope: Adventures in Pre- and Post-Racial America in collaboration with UMD School of Theatre, Dance, and Performance Studies' graduate and undergraduate designers and performers. 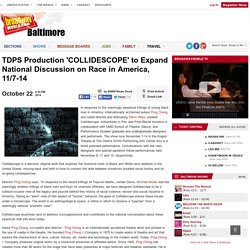 The show runs November 7-14 in the Kogod Theatre at The Clarice Smith Performing Arts Center and is a world premiere performance. Conversations with the cast, designers and special panelists follow performances held November 8, 11 and 13, respectively. Does It Matter that It Was Written by a White Guy? Spurred by the controversies over the new adaptation of The Jungle Book that opened this summer in Chicago, this series of articles explores who is allowed to tell whose stories onstage. 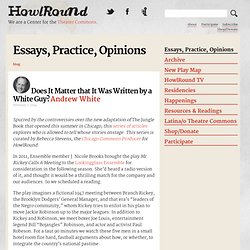 This series is curated by Rebecca Stevens, the Chicago Commons Producer for HowlRound. In 2011, Ensemble member J. Nicole Brooks brought the play Mr. Protecting Racism in Theatre. Yes, I am still talking about this, despite some truly delightful comments and emails requesting that I stop draining all the fun out of life. 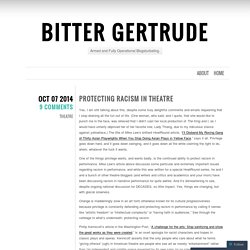 (One woman, who said, and I quote, that she would like to punch me in the face, was relieved that I didn’t cast her local production of The King and I, as I would have unfairly deprived her of her favorite role, Lady Thiang, due to my ridiculous stance against yellowface.) A challenge for the arts: Stop sanitizing and show the great works as they were created. He has hit her before and he will hit her again. 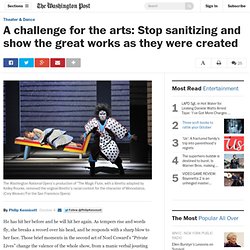 As tempers rise and words fly, she breaks a record over his head, and he responds with a sharp blow to her face. Those brief moments in the second act of Noel Coward’s “Private Lives” change the valence of the whole show, from a manic verbal jousting match to something uglier and more threatening. A man who was a charmer is also a bully, with an appalling lack of self-control. Watching this unfold at the Shakespeare Theatre Company in June was shocking, and today, with an NFL star in disgrace for getting caught violently abusing his fiancee on video, it seems even more surprising.

As American society gropes towards a zero-tolerance policy on domestic abuse, Coward’s play feels like a carefully preserved document found in some archive, a dispassionate testament to crime, connecting us to things in our past we are reluctant to acknowledge or own. I’ll Disband My Roving Gang of Thirty Asian Playwrights When You Stop Doing Asian Plays in Yellow Face* (*Exception: David Henry Hwang’s play Yellow Face) This week on HowlRound, we'll be examining Asian American Theater and exploring the theme of the 4th National Asian American Theater Conference & Festival, "Home: Here?

There? Where? "—Click here for the blog series, livestreaming schedule, and future video archive. Use #theNAATF and #newplay in Twitter. The Ma-Yi Writers Lab is the largest collective of Asian-American playwrights ever assembled.