The 25 best Broadway divas of all time. Historians of the Broadway musical, from the academy to the piano bar, agree on one thing: the archetypal Broadway star is a woman. 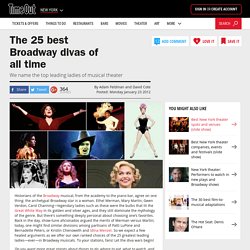 Ethel Merman, Mary Martin, Gwen Verdon, Carol Channing—legendary ladies such as these were the bulbs that lit the Great White Way in its golden and silver ages, and they still dominate the mythology of the genre. But there's something deeply personal about choosing one’s favorites. Back in the day, show-tune aficionados argued the merits of Merman versus Martin; today, one might find similar divisions among partisans of Patti LuPone and Bernadette Peters, or Kristin Chenoweth and Idina Menzel.

So we expect a few heated arguments as we offer our own ranked choices of the 25 greatest leading ladies—ever—in Broadway musicals. To your stations, fans! The Official Masterworks Broadway Site. Being the lyricist for Jesus Christ Superstar, Evita, and The Lion King would in itself be enough to ensure Tim Rice a place in the Broadway pantheon, but those are just three high points in a career teeming with pinnacles. 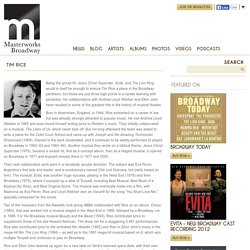 His collaborations with Andrew Lloyd Webber and Elton John have resulted in some of the greatest hits in the history of musical theater. Born in Amersham, England, in 1944, Rice embarked on a career in law but was already strongly attracted to popular music. He met Andrew Lloyd Webber in 1965 and soon found himself writing lyrics to Webber’s music. They initially collaborated on a musical, The Likes of Us, which never took off. But not long afterward the team was asked to write a piece for the Colet Court School and came up with Joseph and the Amazing Technicolor Dreamcoat (1968). Their next collaborative work went in a decidedly secular direction. Rice was knighted in 1994. Broadway: The American Musical. Sir Andrew Lloyd Webber has written some of the most commercially successful musicals of the last quarter of the 20th century. 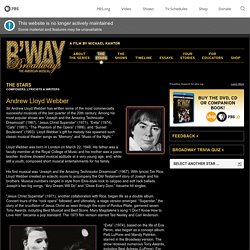 Among his most popular shows are “Joseph and the Amazing Technicolor Dreamcoat” (1967), “Jesus Christ Superstar” (1971), “Evita” (1974), “Cats” (1981), “The Phantom of the Opera” (1986), and “Sunset Boulevard” (1993). Lloyd Webber’s gift for melody has spawned such classic musical theater songs as “Memory” and “Music of the Night.” Lloyd Webber was born in London on March 22, 1948. His father was a faculty member at the Royal College of Music and his mother was a piano teacher. Andrew Lloyd Webber - Songwriter. Composer. 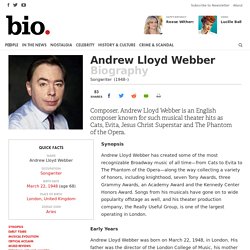 Andrew Lloyd Webber is an English composer known for such musical theater hits as Cats, Evita, Jesus Christ Superstar and The Phantom of the Opera. Synopsis Andrew Lloyd Webber has created some of the most recognizable Broadway music of all time—from Cats to Evita to The Phantom of the Opera—along the way collecting a variety of honors, including knighthood, seven Tony Awards, three Grammy Awards, an Academy Award and the Kennedy Center Honors Award. Songs from his musicals have gone on to wide popularity offstage as well, and his theater production company, the Really Useful Group, is one of the largest operating in London.

Early Years. Andrew Lloyd Webber. Andrew Lloyd Webber, Baron Lloyd-Webber Kt[1][2] (born 22 March 1948) is an English composer and impresario of musical theatre.[3] He has received a number of awards, including a knighthood in 1992,[4] followed by a peerage from Queen Elizabeth II for services to Music, seven Tony Awards, three Grammy Awards, an Academy Award, fourteen Ivor Novello Awards, seven Olivier Awards, a Golden Globe Award, a Brit Award, the 2006 Kennedy Center Honors, and the 2008 Classic Brit Award for Outstanding Contribution to Music.[5][6][7] He has a star on the Hollywood Walk of Fame, is an inductee into the Songwriter's Hall of Fame, and is a fellow of the British Academy of Songwriters, Composers and Authors.[8] Early life[edit] 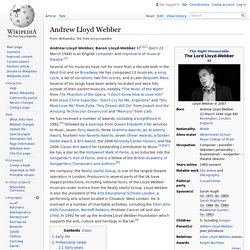 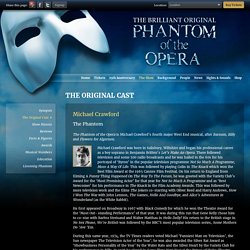 Michael Crawford was born in Salisbury, Wiltshire and began his professional career as a boy soprano in Benjamin Britten’s Let’s Make An Opera. There followed television and some 500 radio broadcasts and he was hailed in the 60s for his portrayal of ‘Byron’ in the popular television programme Not So Much A Programme, More A Way Of Life. Michael Crawford to star in new British musical The Go Between at the Apollo Theatre. It has been announced that Olivier and Tony Award-winning musical theatre legend Michael Crawford will star in the West End premiere of new British musical The Go Between which will open for previews at the Apollo Theatre in London on 27 May 2016, with an official opening on 7 June 2016. 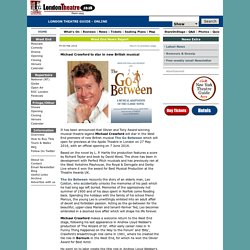 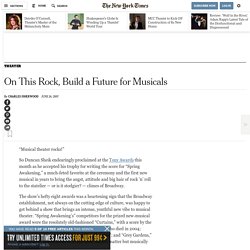 So Duncan Sheik endearingly proclaimed at the this month as he accepted his trophy for writing the score for “Spring Awakening,” a much-feted favorite at the ceremony and the first new musical in years to bring the angst, attitude and big hair of rock ’n’ roll to the statelier — or is it stodgier? — climes of Broadway. The show’s hefty eight awards was a heartening sign that the Broadway establishment, not always on the cutting edge of culture, was happy to get behind a show that brings an intense, youthful new vibe to musical theater. “Spring Awakening’s” competitors for the prized new-musical award were the resolutely old-fashioned “Curtains,” with a score by the legendary team of John Kander and Fred Ebb, who died in 2004; Disney’s latest movie adaptation, “Mary Poppins”; and “Grey Gardens,” wonderfully adventurous in its macabre subject matter but musically traditional. Future of Musical Theatre. Musicals On Stage: A Capsule History. Musicals On Stage: by John Kenrick (Copyright 1996-2003) The ancient Greeks had plays with songs, and Roman comedies included song and dance routines. 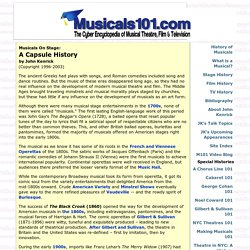 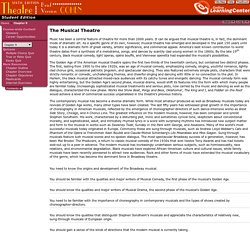 Please change your browser preferences to enable javascript, and reload this page. </b></p><hr> The Musical Theatre Music has been a central feature of theatre for more than 2000 years. A History of the Musical. (These are excerpts from my book "A History of Popular Music") StumbleUpon. History of the Musical: The Future? History of the Musical - Stage & Film by John Kenrick (Copyright 1996 - Updated 2006) The images below are thumbnails – click on them to see larger versions.) Once-squalid Times Square now greets theatergoers with bright lights, glitzy retail shops and family-friendly chain restaurants. Some respected sources insist that the outlook for the Broadway musical is dim. "Musicals flourished into the early sixties, but there were few new playwrights . . . and there seemed room for only one new writer of musicals, Stephen Sondheim.

Stephen Sondheim was equally blunt – American Musical Theatre: An Introduction. IT took many years for the American musical theatre to acquire its own identity. The first musical production in the Colonies was Flora, a performance that took place in a court room in Charleston, South Carolina, on February 8, 1735. Flora was a ballad opera imported from England. The English ballad opera remained popular in the Colonies for several decades. After the Colonies had become a nation, a new kind of stage production began to attract interest: the burlesque. At that time, burlesque consisted of travesties on or parodies of famous plays, performers or dancers--in song, dance, pantomime and dialogue. GCSE Bitesize: Musical theatre. Theatre music. The Most Influential People in Musical-Theater History - Everything I Know I Learned From Musicals.