Some regions of the earth have cooling trends. And some scientist predict that we are entering into a period of global cooling.

Auroral Evidence of Upcoming Mini or Little Ice Age? – Watts Up With That? Guest Opinion; Dr. 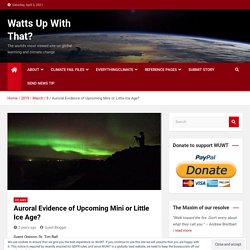 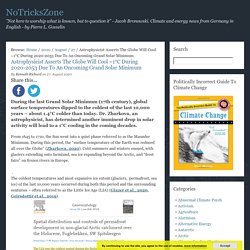 August 2020 During the last Grand Solar Minimum (17th century), global surface temperatures dipped to the coldest of the last 10,000 years – about 1.4°C colder than today. Dr. Zharkova, an astrophysicist, has determined another imminent drop in solar activity will lead to a 1°C cooling in the coming decades. From 1645 to 1710, the Sun went into a quiet phase referred to as the Maunder Minimum.

The coldest temperatures and most expansive ice extent (glaciers, permafrost, sea ice) of the last 10,000 years occurred during both this period and the surrounding centuries – often referred to as the Little Ice Age (LIA) (Glazer et al., 2020, Geirsdottir et al., 2019). In a new paper, Dr. The Real Climate Crisis Is Not Global Warming, It Is Cooling, And It May Have Already Started. By Allan MacRae and Joseph D’Aleo, October 2019 Introduction – Catastrophic Anthropogenic Global Warming – A Failed Hypothesis. 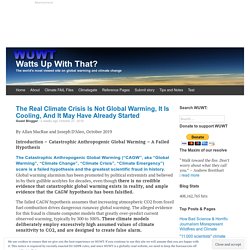 Chinese Scientists Warn Of Global Cooling In New Study. Published on August 14, 2019 Written by Stephen Chen New study has found winters in northern China have been warming since 4,000BC – regardless of human activity. 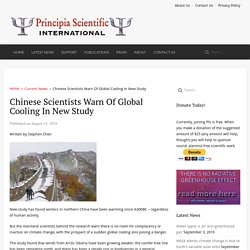 Record Cold Cripples Food Crops: Future Food Security at Risk. By Vijay Jayaraj Are we putting ourselves at risk by not weighing the risks of cold weather appropriately? 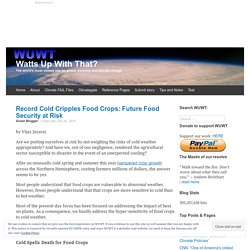 And have we, out of our negligence, rendered the agricultural sector susceptible to disaster in the event of an unexpected cooling? After an unusually cold spring and summer this year hampered crop growth across the Northern Hemisphere, costing farmers millions of dollars, the answer seems to be yes. Most people understand that food crops are vulnerable to abnormal weather. However, fewer people understand that that crops are more sensitive to cold than to hot weather.

Nature Unbound X – The next glaciation. By Javier Summary: The IPCC expresses virtual certainty that a glaciation is not possible for the next 50 Kyr if CO2levels remain above 300 ppm. 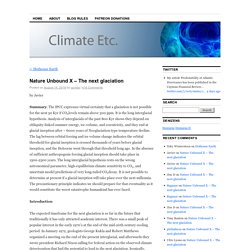 It is the long interglacial hypothesis. Analysis of interglacials of the past 800 Kyr shows they depend on obliquity-linked summer energy, ice-volume, and eccentricity, and they end at glacial inception after ~ 6000 years of Neoglaciation-type temperature decline. The lag between orbital forcing and ice volume change indicates the orbital threshold for glacial inception is crossed thousands of years before glacial inception, and the Holocene went through that threshold long ago. Ice Age Now - The next ice age could begin any day. 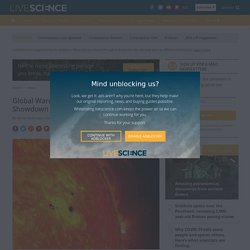 Don't panic; Earth is not going to freeze over. But will the resulting cooling put a dent in the global warming trend? A periodic solar event called a "grand minimum" could overtake the sun perhaps as soon as 2020 and lasting through 2070, resulting in diminished magnetism, infrequent sunspot production and less ultraviolet (UV) radiation reaching Earth — all bringing a cooler period to the planet that may span 50 years. Matt Ridley: Global Cooling Is Not Worth Shivering About. 7 Major Signs The Globe’s Surface Has Been Cooling, And Will Continue To Cool. By now, after some 30 years of dire warnings, you’d think that the warming of the globe and ice mass reduction would be much further along than it actually is. 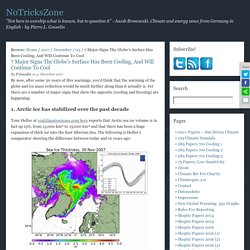 Yet there are a number of major signs that show the opposite (cooling and freezing) are happening: 1. Arctic ice has stabilized over the past decade Tony Heller at realclimatescience.com here reports that Arctic sea ice volume is in fact up 15%, from 13,000 km³ to 15,000 km³ and that there has been a huge expansion of thick ice into the East Siberian Sea. 2 More New Papers Affirm There Is More Arctic Ice Coverage Today Than During The 1400s. Earlier this year, Stein et al., 2017 published a reconstruction of Arctic sea ice variations throughout the Holocene that appeared to establish that there is more Arctic sea ice now than for nearly all of the last 10,000 years. 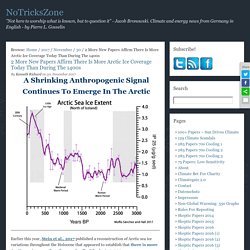 The study region, the Chukchi Sea, was deemed representative of most of the Arctic, as the authors asserted that “the increase in sea ice extent during the late Holocene seems to be a circum-Arctic phenomenon as PIP25-based sea ice records from the Fram Strait, Laptev Sea, East Siberian Sea and Chukchi Sea display a generally quite similar evolution, all coinciding with the decrease in solar radiation.” In 2014, Dr. Qinghua Ding and colleagues published a consequential paper in the journal Nature contending that much of the warming trend in the Arctic since 1979 can be traced to “unforced natural variability” rather than anthropogenic forcing. Then, a few months ago, Dr. 1. Time Running Out For Global Warming Hoaxsters… 7 New Studies Show Large Parts Of Globe Cooling!

Recently I wrote about 7 signs showing that the earth has been cooling and likely will continue to cool. 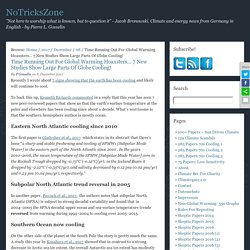 To back this up, Kenneth Richards commented in a reply that this year has seen 7 new peer-reviewed papers that show us that the earth’s surface temperature at the poles and elsewhere has been cooling since about a decade. What’s worrisome is that the southern hemisphere surface is mostly ocean. Forget Global Warming – Worry About The Next Ice Age. North Atlantic Cooling Has Plunged Below 1950s (And 1800s) Levels – And Scientists Project More Cooling. While it has understandably not received much, if any, media attention, the North Atlantic Ocean has been rapidly cooling since the mid-2000s, or for more than 10 years now. The longer the cooling trend continues — and scientists are projecting more cooling for the coming decades — the more difficult it will be to ignore.

The North Atlantic Ocean is, after all, a key trend-setter for hemispheric- and perhaps even global-scale climate changes. In their new paper, for example, Reynolds and colleagues (2017) point out that natural fluctuations in heat transport initiated by the Atlantic Meridional Overturning Circulation (AMOC) are “directly linked” to precipitation and warming/cooling temperature trends in Africa, Brazil, North America, and Europe. Serykh (2016) points out that the warming enjoyed across Europe and Asia between the 1970s and late 1990s may have been associated with natural decadal-scale oscillations in heat transport.

The Last 165 Years… de Jong and de Steur, 2016. Deep Oceans Are Cooling Amidst A Sea of Modeling Uncertainty: New Research on Ocean Heat Content. Guest essay by Jim Steele, Director emeritus Sierra Nevada Field Campus, San Francisco State University and author of Landscapes & Cycles: An Environmentalist’s Journey to Climate Skepticism Wunsch and Heimbach (2014) humbly admit that their “results differ in detail and in numerical values from other estimates, but the determining whether any are “correct” is probably not possible with the existing data sets.” They estimate the changing states of the ocean by synthesizing diverse data sets using models developed by the consortium for Estimating the Circulation and Climate of the Ocean, ECCO. The ECCO “state estimates” have eliminated deficiencies of previous models and they claim, “unlike most “data assimilation” products, [ECCO] satisfies the model equations without any artificial sources or sinks or forces.

It is a question of when. Solar activity is much lower than it was at a similar stage of the last solar cycle but Earthly temperatures have remained stubbornly flat. THE HOCKEY SCHTICK: New paper finds worldwide glacier retreat has decelerated since 1950. Party’s Over, Baby: The Twilight of Abundance Reviewed – William M. Briggs. Winter may be coldest in 1000 years. WeatherBell.com's Joe Bastardi Differs With Mainstream Media: Beware of a Mini Ice Age. Climatesense-norpag: Commonsense Climate Science and Forecasting after AR5 and the Coming Cooling. N N o N: Russian Academy of Sciences: Global warming over in Central Asia.