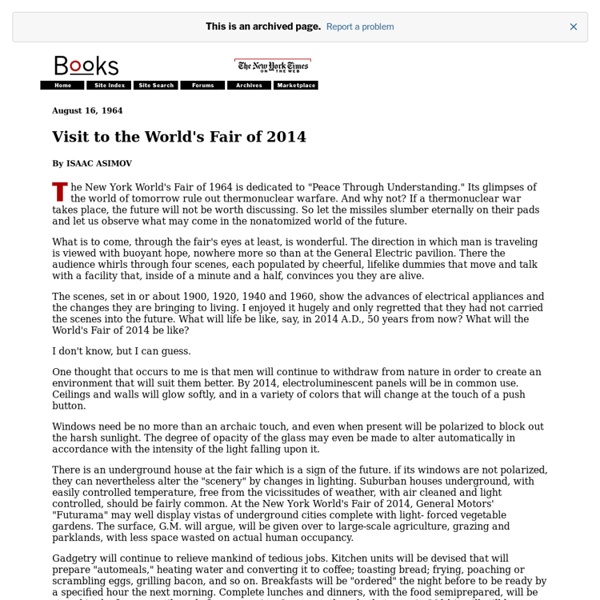 Related:  Speculating on the Future

The Objects in Space That We Really, Really Can't Explain It's a bit odd to describe dark matter as "undetectable" at the end of two paragraphs describing how it has been detected. Dark matter's presence is inferred by its effects on visible matter. It has not been confirmed. Exactly. We can only detect it indirectly, which is to say we can't detect it. :) That's an ambiguous phrase though—in a sense all invisible particles have only been "inferred by their effects on visible matter", insofar as we can only "see" them when some sort of detector made of visible matter does something that we explain in terms interactions with a hidden particle. I hate dark matter and dark energy. I don't think that's fair. The same was true of gravity, really...at one point the theory of its existence was nothing more than an explanation of an unknown force that helps to make calculations work and observations make sense. I plead guilty to ambiguity.

Clementine Scientist searching Twitter for time travelers tells Raw Story why he’s looking for Pope Francis By Scott KaufmanFriday, January 3, 2014 17:49 EDT If time travelers from the future are living among us, is there a way we can detect their presence in a reliable, scientific way? Raw Story talked to Robert Nemiroff, an astrophysicist at Michigan Technological University who attempted to answer that question by searching for time travelers using the Internet. As Nemiroff and one of his graduate students, Teresa Wilson, note in “Searching the Internet for evidence of time travel,” travel into the future is a commonplace occurrence — you are doing it as you read these words. Time travel to the past is “controversial, at best, and impossible according to conventional views of the laws of physics.” Nemiroff and Wilson set out to search “for digital signatures that time travelers potentially left on the Internet.” In the end, the database they chose to use was Twitter. Raw Story asked Dr. “Besides,” he continued, “it wouldn’t have to be the traveler himself who used Twitter. [Image via BBC One]

Robbie Williams- Better Man Live at Knebworth Reflected hidden faces in photographs revealed in pupil Zooming in on the pupil of a subject’s eye reveals hidden bystanders (credit: Rob Jenkins) The pupil* of the eye in a photograph of a face can be mined for hidden information, such as reflected faces of the photographer and bystanders, according to research led by Dr. Rob Jenkins, of the Department of Psychology at the University of York and published in PLOS ONE (open access). The researchers say that in crimes in which the victims are photographed, such as hostage taking or child sex abuse, reflections in the eyes of the photographic subject could help to identify perpetrators. By zooming in on high-resolution passport-style photographs, Jenkins and co-researcher Christie Kerr of the School of Psychology, University of Glasgow were able to recover bystander images that could be identified accurately by observers, despite their low resolution. Lineup-style array of reflected images from photographs for spontaneous recognition task in experiment. Forensics implications

All the free stock How far should we trust scientific models? – Jon Turney Here’s a simple recipe for doing science. Find a plausible theory for how some bits of the world behave, make predictions, test them experimentally. If the results fit the predictions, then the theory might describe what’s really going on. Now, however, there is a new ingredient. As computer modelling has become essential to more and more areas of science, it has also become at least a partial guide to headline-grabbing policy issues, from flood control and the conserving of fish stocks, to climate change and — heaven help us — the economy. Modelling is an old word in science, and the old uses remain. Computer models are different. In this new world of computer modelling, an oft-quoted remark made in the 1970s by the statistician George Box remains a useful rule of thumb: ‘all models are wrong, but some are useful’. It would be harder to model a totally new disease, but we would know the factors likely to influence its spread. Generalisations about modelling remain hard to make.

gizmodo Capturing images of bystanders by zooming in on pictures of corneas In Identifiable Images of Bystanders Extracted from Corneal Reflections, British psychology researchers Rob Jenkins and Christie Kerr show that recognizable images of the faces of unpictured bystanders can be captured from modern, high-resolution photography by zooming in on subjects' eyes to see the reflections in their corneas. The researchers asked experimental subjects to identify faces captured from these zoomed-in images and found that they were able to do so with a high degree of reliability. The researchers used 39 megapixel cameras, substantially higher-rez than most people's phone-cameras, but low-cost cameras are making enormous leaps in resolution every day. “In the context of criminal investigations, this could be used to piece together networks of associates, or to link individuals to particular locations. Reflected hidden faces in photographs revealed in pupil [Kurzweil AI]

IGDA Game Access The Dumbass Haunted World – When Propaganda Masquerades as Science Because last week’s reblogging of Robert Anton Wilson’s rather harsh critique of Carl Sagan resulted in a rather spirited dialogue on my Facebook page (friend me), I did something weird. I decided to take some of my fans advice and actually read a bit of Sagan’s work, which I admitted in the post that I’d never truly done. Sadly, since I spend half my life working a soulless day job, I don’t normally have much time to commit to researching things I intentionally avoid for impromptu rants. First off, what’s compelling from a psychological perspective is that part of the reason that post resonated with peeps had to do with a lot of them growing up a huge fan of both R.A.W. and Sagan. Moving on. For those not in the know, what you’re running into with alien contactee phenomenon is that it seems directly tied to UFO anomalies in some fashion. “The form of the supposed aliens is marked by the failure of the imagination and a preoccupation with human concerns. Adorable right? And again:

Aleks0 : Pasando de promocionar el muy... Asia’s Richest Man Invests In BitPay After some serious drubbing in two of the world’s largest countries during past few weeks, the Bitcoin ecosystem may have found its biggest individual backer yet in Li Ka-shing, Asia’s richest man. Li is now an investor in Atlanta-based BitPay, the startup with ambitions to become the PayPal for the virtual currency world. He has made this investment through his venture capital company, Horizons Ventures, an early investor in companies such as Facebook, Waze, Skype and Summly. A BitPay spokeswoman told me that Horizons Ventures and the Founders Fund are among a group of investors including Shakil Khan, Barry Silbert, Jimmy Furland, Roger Ver and Ben Davenport, who have put around $2.7 million in the startup so far. Founders Fund is the VC group run by people who founded and were early employees at PayPal. In May this year, BitPay raised $2 million from the Founders Fund. It’s been a very busy month for Bitcoin, mostly filled with bad news in two of the world’s biggest countries.

Human Resource Machine Program little office workers to solve puzzles. Be a good employee! The machines are coming... for your job. About the Game Human Resource Machine is a puzzle game. Don't worry if you've never programmed before - programming is just puzzle solving. About the Game: For Expert Nerds (You don't actually need to know any of the below, but if you're already a computer pro, you might find this "behind the scenes" peek into the machine interesting! Your office is a simple computer. In each level, your boss gives you a task, like "Take everything from the INBOX, and put it in the OUTBOX!" You might describe this machine as Harvard Architecture with a single accumulator. Already an expert? Do a good job, and have fun! <div style="width:555px; font-size:1.75em; color:#464646; padding:10px; margin-top:8px; background-color:#ecc673; border-radius: 10px;" > Note: You must have javascript enabled in your browser to use the order form.

Related:
Related:  Speculating on the Future