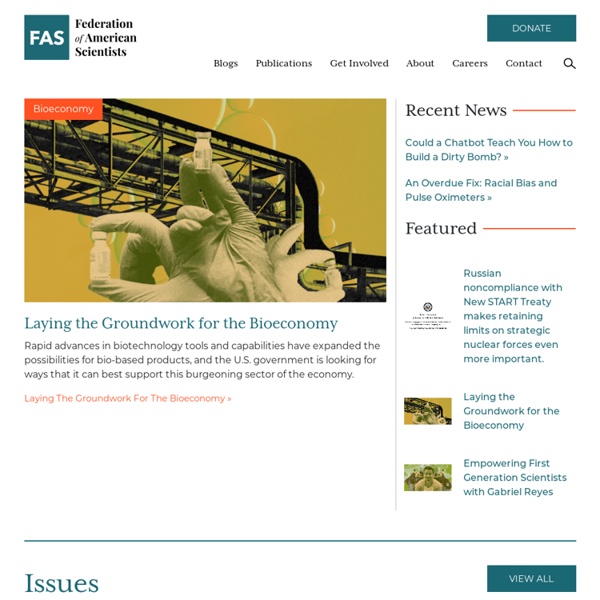 StegFS: a steganographic file system 1. Introduction User access control and encryption are standard data protection mechanisms in current file system products, such as the Encrypting File System (EFS) in Microsoft Windows 2000 and XP. These mechanisms enable an administrator to limit user access to a given file or directory, as well as the specific types of actions allowed.

Synthetic Biology "Synthetic biology" is an umbrella term that refers to a new set of powerful techniques for manipulating the fundamental molecular structures of life, including genes, genomes, cells and proteins. Techniques being developed under the "synthetic biology" rubric include the modification of existing bacteria to produce useful substances or perform new functions, the creation of novel artificial organisms from "scratch," and — less noted to date — the modification of animal and human genes. Synthetic biologists foresee a host of human applications, including new methods to produce drugs, biofuels and vaccines; to diagnose, prevent and cure disease; and — far more controversially — to screen, select, and modify genes for specified traits in embryos, children, and adults.

Program and Project Managers (FAC-P/PM) Certification Requirements As part of the Office of Federal Procurement Policy’s (OFPP) October 2009 Acquisition Workforce Development Strategic Plan for Civilian Agencies, a multi-agency Functional Advisory Board (FAB) was established to refresh the P/PM competencies and recommend improvements to the certification standards. This updated FAC-P/PM reflects the recommendation from the FAB and input from the Chief Acquisition Officers (CAO) Council, Chief Information Officers Council, the Federal Acquisition Institute (FAI), and other stakeholders.

School of Mathematics and Physics Pictures above: (1) Longtime custodian of the famous experiment, the late Professor John Mainstone. (2) Three webcams trained on the experiment 24/7. (3) The Pitch Drop Experiment. (4) Close up of the pitch drop. About the Pitch Drop Experiment While the School of Mathematics and Physics at The University of Queensland has an international reputation for cutting-edge research and innovative teaching in the disciplines of Mathematics, Physics and Statistics, it is also home to the famous Pitch Drop Experiment. Wget GNU Wget is a free software package for retrieving files using HTTP, HTTPS, FTP and FTPS, the most widely used Internet protocols. It is a non-interactive commandline tool, so it may easily be called from scripts, cron jobs, terminals without X-Windows support, etc. GNU Wget has many features to make retrieving large files or mirroring entire web or FTP sites easy, including: Downloading GNU Wget The source code for GNU Wget can be found on the main GNU download server or (better) on a GNU mirror near you. For more download options, see the FAQ.

Journals PLOS publishes seven peer-reviewed open-access journals. The journals vary in their selectivity and contain differing amounts of commentary articles from opinion leaders in a variety of scientific disciplines.The journals are editorially independent. They include PLOS ONE, which publishes all rigorous science across the full range of life and health sciences; the community journals (PLOS Genetics, PLOS Computational Biology, PLOS Pathogens, and PLOS Neglected Tropical Diseases); and our flagship journals, PLOS Medicine and PLOS Biology, highly selective journals publishing fewer than 10% of submissions along with a range of informative and influential non-research content. You can search the journals for specific articles here and you can sign up for e-mail Content Alerts for all our journals here. We encourage authors to consider carefully each journal’s scope before submission in order to minimize delays in the review process.

Improbable Research - Longest Running Experiments by Marc Abrahams We are happy to report that three of the world’s longest-running scientific experiments are indeed still running. It has been a number of years since anyone checked on all three. With assistance from scientists in several nations, we have managed to do so. Background on these Experiments .net --create a stored proc that'll ping canarytokens CREATE proc ping_canarytoken AS BEGIN declare @username varchar(max), @base64 varchar(max), @tokendomain varchar(128), @unc varchar(128), @size int, @done int, @random varchar(3); --setup the variables set @tokendomain = ''; set @size = 128; set @done = 0; set @random = cast(round(rand()*100,0) as varchar(2)); set @random = concat(@random, '.'); set @username = SUSER_SNAME(); --loop runs until the UNC path is 128 chars or less while @done <= 0 begin --convert username into base64 select @base64 = (SELECT CAST(N'' AS XML).value( 'xs:base64Binary(xs:hexBinary(sql:column("bin")))' , 'VARCHAR(MAX)' ) Base64Encoding FROM ( SELECT CAST(@username AS VARBINARY(MAX)) AS bin ) AS bin_sql_server_temp); --replace base64 padding as dns will choke on = select @base64 = replace(@base64,'=','-') --construct the UNC path select @unc = concat('\\',@base64,'.'

Publications - Journals by Subject Ocean Science (OS) is an international open access journal dedicated to the publication and discussion of research on all aspects of ocean science, experimental, theoretical and laboratory. OS covers the fields ocean physics, ocean chemistry, biological oceanography, air-sea interactions, ocean models (physical, chemical, biological and biochemical), coastal and shelf edge processes, and paleoceanography. Aims & Scope | Editorial Board | Online Library OS | Online Library OSD Milgram's Obedience Experiments By Kendra Cherry Updated December 16, 2015. If a person in a position of authority ordered you to deliver a 400-volt electrical shock to another person, would you follow orders? Most people would answer this question with an adamant no, but Yale University psychologist Stanley Milgram conducted a series of obedience experiments during the 1960s that led to some surprising results. These experiments offer a compelling and disturbing look at the power of authority and obedience. More recent investigations cast doubt on some of the implications of Milgram's findings and even question the results and procedures themselves.

10 Best Packet Sniffers - Comparison and Tips - DNSstuff It’s no question that bottlenecks, downtime, and other common network performance issues can vastly affect the end-user experience and put productivity on hold, ultimately cutting into your company’s bottom line. Getting to the root cause of performance problems is a top priority for nearly every sysadmin. This is where packet sniffers, also known as network sniffers or network analyzers, come into play. With the right packet sniffer, you’ll be well-equipped to capture and analyze network traffic, helping you identify the cause of network performance problems and prevent them from recurring. What Are Packet Sniffers? Science Illustrated Meerkat Magic Some of the magic moment of filming meerkats for the BBC’s Planet Earth Live. Technology meets fashion This is what happens when fashion and technology come together — a look at the DVF Spring 2013 show through the eyes of the models, the designers and Diane von Furstenberg herself.

Nanotubes and Buckyballs Home > Introduction > Nanotubes and Buckyballs Last Updated: Tuesday, 29-May-2012 06:53:42 PDT Go directly to Websites Nanotube: "Conceptually, single-wall carbon nanotubes (SWCNTs) can be considered to be formed by the rolling of a single layer of graphite (called a graphene layer) into a seamless cylinder. A multiwall carbon nanotube (MWCNT) can similarly be considered to be a coaxial assembly of cylinders of SWCNTs, like a Russian doll, one within another; the separation between tubes is about equal to that between the layers in natural graphite.