A Timothy Leary for the Viral Video Age - Ross Andersen 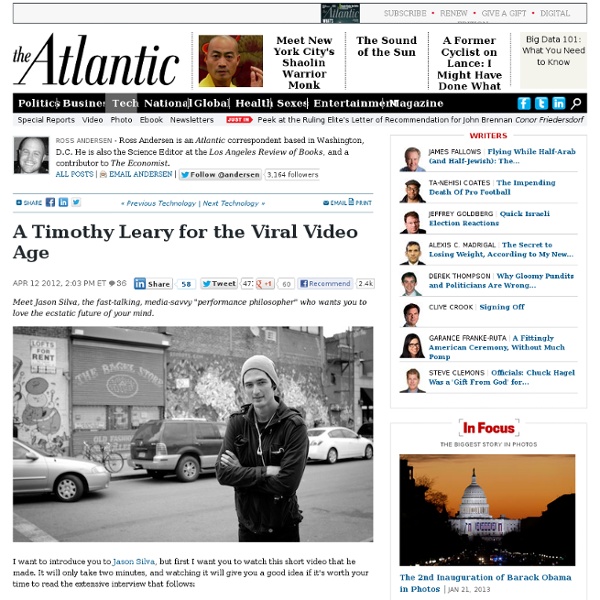 Meet Jason Silva, the fast-talking, media-savvy "performance philosopher" who wants you to love the ecstatic future of your mind. I want to introduce you to Jason Silva, but first I want you to watch this short video that he made. It will only take two minutes, and watching it will give you a good idea if it's worth your time to read the extensive interview that follows: If you ever wondered what would happen if a young Timothy Leary was wormholed into 2012, complete with a film degree and a Vimeo account, you have your answer: Jason Silva. Like Leary, Silva is an unabashed optimist; he sees humankind as a species on the brink of technology-enabled transcendence. Silva's work is starting to get some traction; his short films have been viewed over half a millon times, and in just the past year he has been invited to speak at Google, the Singularity Summit, and The Economist's Ideas Festival. Silva: Definitely. And these videos that you're making now? Right. You can even go beyond that.

The Looking Glass Gallery I am shutting down the worldwide operations of the Ching-Chong Ding-Dong Foundation For Sensitivity To Orientals Or Whatever… The saddest part is because of all the attention, we raised a lot of money over the weekend, money that will now be donated to Dan Snyder’s The Washington Redskins Original Americans Foundation which Twitter seems to be fine with because I haven’t seen shit about that. Stephen Colbert Noocracy Noocracy (/noʊˈɒkrəsi/ or /ˈnoʊ.əkrəsi/), or "aristocracy of the wise", as defined by Plato, is a social and political system that is "based on the priority of human mind", according to Vladimir Vernadsky.[citation needed] It was also further developed in the writings of Pierre Teilhard de Chardin.[citation needed] Etymology[edit] Development[edit] One of the first attempts to implement such a political system was perhaps Pythagoras' "city of the wise" that he planned to build in Italy together with his followers, the order of "mathematikoi." As defined by Plato, Noocracy is considered to be the future political system for the entire human race, replacing Democracy ("the authority of the crowd") and other forms of government. Publications[edit] In the European Commission Community Research publication, Art & Scientific Research are Free: Towards a Culture of Life, it states several commentaries by Hans Jonas and especially Ladislav Kovác about Noocracy.[1] See also[edit] References[edit]