What is Wrong with Illegal Immigration? - Philosophy in Progress. Immigration is a major issue of our time. 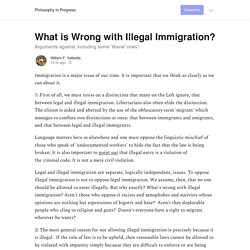 It is important that we think as clearly as we can about it. 1) First of all, we must insist on a distinction that many on the Left ignore, that between legal and illegal immigration. Libertarians also often elide the distinction. The elision is aided and abetted by the use of the obfuscatory term 'migrant' which manages to conflate two distinctions at once: that between immigrants and emigrants, and that between legal and illegal immigrants. Language matters here as elsewhere and one must oppose the linguistic mischief of those who speak of 'undocumented workers' to hide the fact that the law is being broken. Legal and illegal immigration are separate, logically independent, issues. 2) The most general reason for not allowing illegal immigration is precisely because it is illegal. Computer Models Aren’t Science — Guest Post by Robert Kurland. This piece ran originally at The American Catholic, but Kurland graciously allowed us to re-run it here. 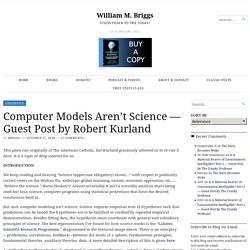 It is a topic of deep interest for us. We keep reading and hearing “Science (uppercase obligatory) shows…” with respect to politically correct views on the Wuhan flu, anthropic global warming, racism, economic oppression, etc….. “Believe the science.” Cuomo, Whitmer, Newsom Are Worse Than Wrong: Coronavirus Update XLIV. The Godmother closed restaurants again. 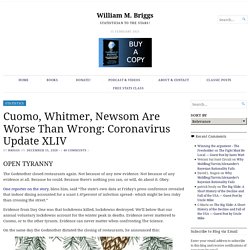 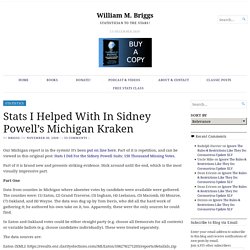 The Georgia Vote-Counting Video Was Not 'Debunked.' Not Even Close. A Big Tech-backed “fact” “checking” outfit claimed to debunk explosive evidence in support of Republicans’ claims of significant election problems at a Thursday Georgia Senate hearing. 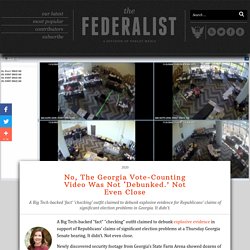 It didn’t. Not even close. Newly discovered security footage from Georgia’s State Farm Arena showed dozens of ballot counters, media, and Republican observers leaving en masse at the same time from the ballot-counting area for Fulton County. After they left, a small remnant of about four workers began pulling trunks containing thousands of ballots from underneath a table with a long tablecloth and running them through machines. The footage supported claims from Republicans that they were told counting had stopped for the night, only to find out hours later that it had kept going on.

On Friday morning, a group called Lead Stories published a “hoax alert” falsely claiming to have debunked the security video. Were Republican Poll Watchers and the Media Told Counting Had Stopped For The Night? Kerry Lutz Podcast — What the Covid-19 Statistics Are Really Saying with W.M. Briggs. Podcast I was recently on with Kerry Lutz’s Financial Survival Network speaking on the coronadoom. 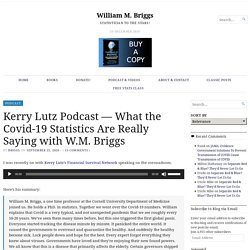 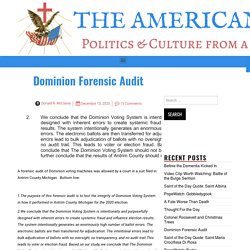 Bottom line: VIDEO EVIDENCE: Secret Cases FULL of Ballots In Georgia!? Stats I Did For the Sidney Powell Suits: 150 Thousand Missing Votes – William M. Briggs. Around 154 thousand votes or so (plus or minus) have perhaps gone missing across several states. 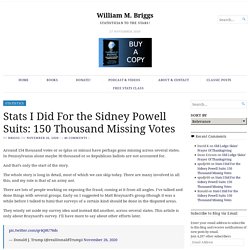 In Pennsylvania alone maybe 30 thousand or so Republican ballots are not accounted for. Strange House Results – The American Catholic. The Taboo That Could Break America, Part I. '$55,000 for 5,000 Votes' in Texas to Elect Biden: Project Veritas. BREAKING EXCLUSIVE: Analysis of Election Night Data from All States Shows MILLIONS OF VOTES Either Switched from President Trump to Biden or Were Lost.

No Problem With the Vote Totals in Pennsylvania – The American Catholic. More Anomalies In Late Vote Additions In Pennsylvania – William M. Briggs. Thanks to all the people who responded to yesterday’s post. 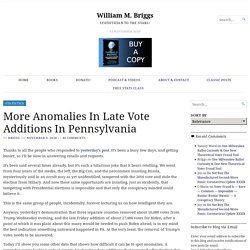 It’s been a busy few days, and getting busier, so I’ll be slow in answering emails and requests. It’s been said several times already, but it’s such a hilarious joke that it bears retelling. We went from four years of the media, the left, the Big Con, and the neoconmen insisting Russia, mysteriously and in an occult way as yet unidentified, tampered with the 2016 vote and stole the election from Hillary. Voter Fraud Is — Rare — Common — Impossible — Russia! Russia! Russia! — A Conspiracy Theory – William M. Briggs. I’m working on more analysis which will appear soon. 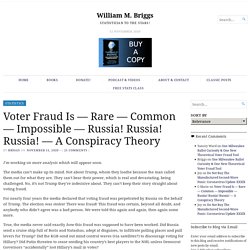 The media can’t make up its mind. Not about Trump, whom they loathe because the man called them out for what they are. One Milwaukee Ballot Curiosity & One New Theoretical Voter Fraud Tool – William M. Briggs. Milwaukee Milwaukee is comprised of a number of wards, almost 500, from which was collected the number of votes each candidate received in both the 2016 and 2020 Presidential elections (official source link). A copy of that was given to me (I take it as is) from which comes the following analysis. The 2020 election: fuckery is afoot. I am more offended by how ham fisted, clumsy, and audacious the fraud to elect him is than the idea of Joe Biden being president. I think Joe Biden is a corrupt idiot, however, I think America would survive him like we’ve survived previous idiot administrations. However, what is potentially fatal for America is half the populace believing that their elections are hopelessly rigged and they’re eternally fucked.

And now, however this shakes out in court, that’s exactly what half the country is going to think. Who Do You Trust More: A Sturgis Biker or An Academic Economist Waving His Wee P-value Around? – William M. Briggs. The only thing right about that new Sturgis Biker paper everybody is talking about is the opening quotation from somebody calling himself Smash Mouth (asterisks original): “Now we’re all here together tonight. And we’re being human once again. F*ck that Covid sh*t.” Amen, brother. The Real State Of The COVID Crisis – William M. Briggs. In short: there isn’t one. Michigan Governor Lady Whitmer extended her power grab on Tuesday, until September 4th. The Michigan legislature is run by the GOP, which, like all Republicans, are either open progressives or sniveling cowards, afeared about being called bad names.

They could stop her, and have made noises like they want to, but won’t. We had a word for these fellows we used in the military, unprintable here. Here’s the true state of the crisis in Michigan, from the Google itself. This is attributed coronadoom deaths, which are almost certain to be larger than actual coronadoom deaths. The experts have no one to blame but themselves. The Week’s Damon Linker frets about the state of the “American character,” citing an emergency physician’s wife he knows whose friends ignore her frantic pleas on Facebook to take COVID-19 more seriously. I was wrong. We scared you unnecessarily, says environmentalist. Michael Schellenberger has been called an "environmental guru," "climate guru," "North America's leading public intellectual on clean energy," and "high priest" of the environmental movement for his writings and TED talks, which have been viewed over five million times.

His latest book, Apocalypse Never, is creating a huge controversy. Coronavirus Update XXI: Calm Down! Record Testing Is Why There Are Record “Cases” – William M. Briggs. Erosion of trust: 10 things public health establishment got wrong about coronavirus. The Illegal and/or Unconstitutional Actions of President Barack Obama, Part 1. Andrew Cuomo is no hero. He's to blame for New York's coronavirus catastrophe. Ndrew Cuomo may be the most popular politician in the country. Attribution of Warming due to Human Emissions. Corona Meltdowns. Eu.desmoinesregister. The Army National Guard commander of a COVID-19 testing site explains the need for masks that actually work.

Woman sues clinic for prescribing her transgender puberty blockers at 16: "I should have been challenged" Pro-Abortion Study Falsely Claims Most Women Don’t Regret Ending Their Baby’s Life in Abortion. A new study by pro-abortion researchers claims to show that very few women regret aborting their unborn babies. The research from the University of California San Francisco claims that nearly 95 percent of post-abortive women have no regrets about their abortions, the Independent reports.

The Consent Fallacy – William M. Briggs. How Did the Roe vs Wade Decision Work? How Did the Obergefell Decision Work? PewUpgradingVoterRegistrationpdf. Does Abortion Really Reduce Crime? Another Look at Freakonomics. This is Not Satire. An Open Pedophile is Running for Congress. Denying Genetics Isn’t Shutting Down Racism, It’s Fueling It. How Genetics Is Changing Our Understanding of ‘Race’ Msgr. Swetland’s confusions. New Study Shows Birth Control and Contraception Don’t Cut Abortions. Studies: Birth Control, Contraception Don't Cut Abortions.

An open letter to the Virginia Tech community - AEI. Mirror of Justice. 14 Things You Should Understand About Guns Before Writing About Them. You Ought to Have a Look: Science Round Up—Less Warming, Little Ice Melt, Lack of Imagination. The fiddling with temperature data is the biggest science scandal ever. Mercury News: Search Results. UN Shock News : Entire Nations Drowned In 1999. Failed Predictions: Model/Human. Failed climate predictions gets a website. Warmlist. Public Health Ignored as HIV Spreads. John Derbyshire On Why Race Realism Makes More Sense Than “Magic Dirt” Theory. Ice, Ice, Baby – waka waka waka. Lean In to Be Stretched Thin? Pallium lecture 2015. Immigration and social order. The most violent country in Europe: Britain is also worse than South Africa and U.S.