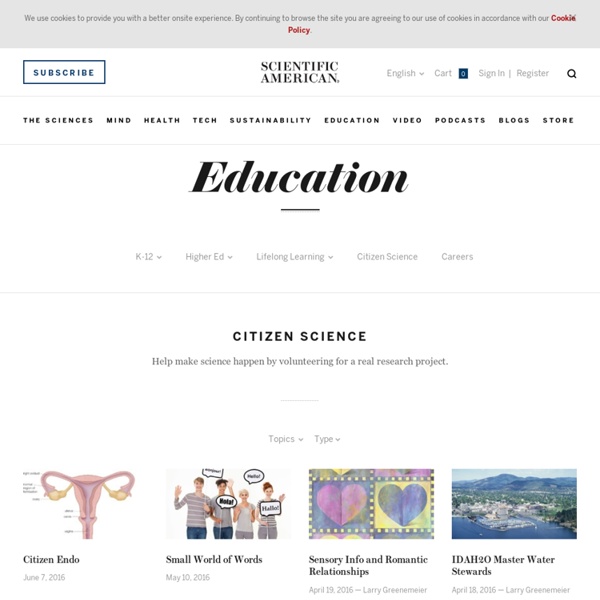 Citizen CyberScience Blog Solve Puzzles for Science | Foldit MilkyWay@Home Online Gamers Achieve First Crowd-Sourced Redesign of Protein Obsessive gamers' hours at the computer have now topped scientists' efforts to improve a model enzyme, in what researchers say is the first crowdsourced redesign of a protein. The online game Foldit, developed by teams led by Zoran Popovic, director of the Center for Game Science, and biochemist David Baker, both at the University of Washington in Seattle, allows players to fiddle at folding proteins on their home computers in search of the best-scoring (lowest-energy) configurations. The researchers have previously reported successes by Foldit players in folding proteins, but the latest work moves into the realm of protein design, a more open-ended problem. "I worked for two years to make these enzymes better and I couldn't do it," says Justin Siegel, a post-doctoral researcher working in biophysics in Baker's group. The latest effort involved an enzyme that catalyses one of a family of workhorse reactions in synthetic chemistry called Diels-Alder reactions. Science by intuition

SETI@home Foldit Gamers Solve Riddle of HIV Enzyme within 3 Weeks When video gamers armed with the world's most powerful supercomputers take on science and its most vexing riddles, who wins? Sometimes, it's the gamers. Humans retain an edge over computers when complex problems require intuition and leaps of insight rather than brute calculation. Savvy programmers and researchers at the University of Washington have tapped into this human "supercomputer" with Foldit, an online game that poses complex puzzles about how proteins fold, one of the hardest and most expensive problems in biology today. "Foldit attempts to predict the structure of a protein by taking advantage of humans' puzzle-solving intuitions and having people play competitively to fold the best proteins," the company explains on its website. "Since proteins are part of so many diseases, they can also be part of the cure. They've been on a tear ever since. Their latest solution has resolved a problem stumping scientists for a decade. Want to discover the next cure? Game on.

Citizen Science Alliance American Gut In the summer of 2008, a 26-year-old man from Shanxi Province walked into a lab at Shanghai Jiao Tong University, and 23 weeks later walked out 113 pounds lighter. He had not participated in a clinical trial of some new secret weight loss pill, or signed up for a punishing Biggest Loser-style exercise program, nor had he been fussed over by behavioral scientists who made his plates and drinking cups smaller with each passing week. The researchers, who were microbiologists, had simply put the man’s gut microbes on a diet. One of the huge mysteries in studies of diet and exercise is the difference between people who get the same treatment but have remarkably different outcomes. But why are there such extreme differences between people? Is our DNA to blame? In addition to the familiar human genome that we inherit from our moms and dads, each of us also has hundreds of trillions of microbial symbionts, each with their own genomes. No. 5. No. 4. No. 3. No. 2. No. 1.