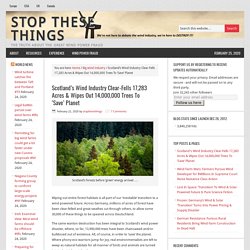 Wiping out entire forest habitats is all part of our ‘inevitable’ transition to a wind powered future. Across Germany, millions of acres of forest have been clear-felled and great swathes cut through others, to allow some 30,000 of these things to be speared across Deutschland. The same wanton destruction has been integral to Scotland’s wind power disaster, where, so far, 13,900,000 trees have been chainsawed and/or bulldozed out of existence. All, of course, in order to ‘save’ the planet. Where phony eco-warriors jump for joy, real environmentalists are left to weep as natural habitats for all manner of birds and animals are turned into industrial wastelands. More than 13.9 million trees felled in Scotland for wind development, 2000–2019 National Wind Watch Scottish Forestry 16 January 2020. Untitled. A few commentators have begun to stumble towards the fact that the policy of becoming “carbon neutral” by 2050, as adopted by the UK and the EU, would undo modernity itself. 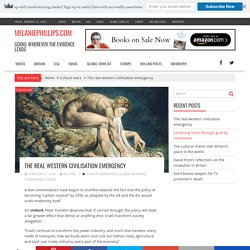 On Unherd, Peter Franklin observes that, if carried through, the policy will have a far greater effect than Brexit or anything else; it will transform society altogether. “It will continue to transform the power industry, and much else besides: every mode of transport; how we build, warm and cool our homes; food, agriculture and land use; trade, industry, every part of the economy”. Franklin is correct. Even so, he seems not to grasp the full implications of the disaster he intuits – because he thinks there’s some kind of middle way through which the imminent eco-apocalypse can be prevented without returning Britain to the Middle Ages. Untitled. Untitled. Untitled. Climate Debate - Mann vs Curry & Moore June 2018. Climate Debate - Mann vs Curry & Moore June 2018. Untitled. Untitled. By Patrick Wood, Editor Intro­duc­tion Critics who think that the U.S. dollar will be replaced by some new global cur­rency are per­haps thinking too small. 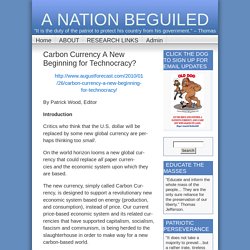 On the world horizon looms a new global cur­rency that could replace all paper cur­ren­cies and the eco­nomic system upon which they are based. The new cur­rency, simply called Carbon Cur­rency, is designed to sup­port a rev­o­lu­tionary new eco­nomic system based on energy (pro­duc­tion, and con­sump­tion), instead of price. Our cur­rent price-based eco­nomic system and its related cur­ren­cies that have sup­ported cap­i­talism, socialism, fas­cism and com­mu­nism, is being herded to the slaugh­ter­house in order to make way for a new carbon-based world. It is plainly evi­dent that the world is laboring under a dying system of price-based eco­nomics as evi­denced by the rapid decline of paper cur­ren­cies.

What is Carbon Cur­rency and how does it work? Sounds very modern in con­cept, doesn’t it? Back­ground Tran­si­tion Con­clu­sion If M. ACTUAL SCIENTIST: "Climate Change is a Scam!" Untitled. Light Bulbs Disprove Global Warming. Dr. 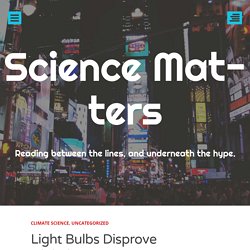 Peter Ward explains at The Hill Greenhouse gases simply do not absorb enough heat to warm Earth Excerpts in italics with my bolds. Science is not done by consensus, by popular vote, or by group think. As Michael Crichton put it: “In science consensus is irrelevant. What is relevant is reproducible results. Untitled. The inconvenient truth about Al Gore is that he only took 2 science classes, and barely passed those. 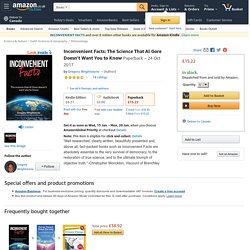 In case you didn't know, his predictions, like every other climate alarmist since the 1920's, were wrong. He did, however, major in religion, and has successfully created a new religion, Environmentalism, to which millions of uninformed people have blindly subscribed. Simple, concise and easy to read, this book shows how so-called "scientists" have taken studies and data and cherry-picked, changed, or otherwise misconstrued it to achieve a desired and false outcome. To hear supposedly educated people keep repeating "the polar bears will be extinct without the ice" makes me laugh every time, but it's just one of the myths of climate change that people really believe. Untitled. Evaluating The Integrity Of Official Climate Records. HOW DARE YOU: 10 reasons not to believe climate change criers. A Dearth of Carbon (w/ Dr. Patrick Moore, environmentalist) Untitled. Guest post by Jim Steele What’s Natural? 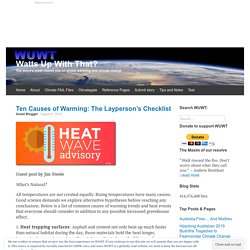 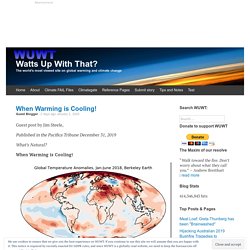 The True and False of Climate Change. Published on October 30, 2019 Written by M. 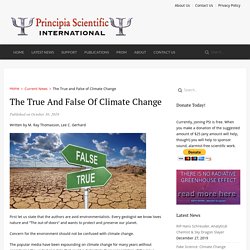 Ray Thomasson, Lee C. Gerhard First let us state that the authors are avid environmentalists. Every geologist we know loves nature and “The out-of-doors” and wants to protect and preserve our planet. Untitled. Farewell to the man who invented 'climate change’ During the Second World War, having emerged from humble origins in the Great Depression, Strong became convinced that the new United Nations should become a world government, dedicated to ensuring that the wealth enjoyed by the richer countries of the West should be spread out around the world’s underprivileged majority. 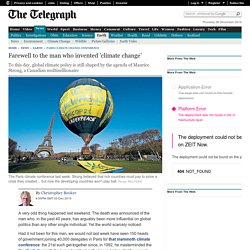 Maurice Strong: he established the UN? S environmental agenda (Canadian Press/AP) In the Sixties, having become very rich himself from Canada’s oil industry, Strong came to see that the key to his vision was “environmentalism”, the one cause the UN could harness to make itself a truly powerful world government. A superb political operator, in 1972 he set up a UN “Environment Conference” in Stockholm, to declare that the Earth’s resources were the common inheritance of all mankind. They should no longer be exploited for the benefit of only a few countries, at the expense of poorer countries across the globe. "Strong’s dream is more than ever falling apart" Untitled. The Trump administration is reportedly considering issuing an executive order that would make it easier for everyone to access publicly funded research. 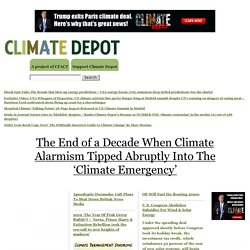 According to E&E News, the White House is considering mandating, via executive order, that all federally funded research be immediately available to the public upon publication. Currently, a lot of federally funded research is kept behind a paywall for one year before it becomes public. The executive order would reportedly mandate eliminating that paywall period... But if what’s reported is broadly true, this could be a big win for a movement known as Open Science, which has complained that for too long, taxpayer-funded research has been locked behind expensive paywalls, keeping it out of reach for the people who paid for it...

Publishers, however, are not pleased. Untitled. Untitled. Untitled. Climate I: Is The Debate Over? Climate I: Is The Debate Over? Global warming: why you should not worry. Untitled. Untitled. Protest By demonstrating their courage and tenacity, ACT UP grew in size and power, drawing more people into emergency mode. New members contributed their skills, resources, and networks to the cause. By keeping their protests non-violent, ACT UP invited participation from a larger group. Erica Chenoweth has demonstrated that non-violent campaigns are much more likely to be successful at involving significant portions of the population, and more successful at accomplishing their overall goals. (Partial) Success! With its combination of public protest, private acts of courage, and education & advocacy, ACT UP accomplished many of its aims. ACT UP’s work has not been completed, however. Like ACT UP, the climate movement is responding to a direct existential threat.

People who understand the climate emergency must exit normal mode and abandon the gradual policy advocacies and enervated emotional states that accompany it. Seeking Consensus Addressing Helplessness Truth Based Communication Films. Untitled. © Liv Oeian / ShutterstockGreta Thunberg In the matter of a few months, Greta Thunberg went from a lone girl protesting in front of the Swedish parliament to an international phenomenon. Although mass media is making it seem as if this meteoric rise to prominence happened organically, this is simply not true. Behind Greta is a major machine, one that is controlled by major international actors and backed by major funds. This PR machine has allowed Greta to make the covers of magazines, become the subject of thousands of news articles while being photographed with world leaders and giving speeches at elite organizations such as the United Nations.

Although Greta might very well be genuinely concerned with the fate of the planet, her message is carefully crafted by those who control her to generate a specific response from the youth. Before going further, I need to point out that I am neither a "climate denier" nor a "climate activist". Untitled. Untitled. Extinction Rebellion and the Great Climate Change Scam – Eddie’s Blog. “The society of experts will control propaganda and education. It will teach loyalty to the world government, and make nationalism high treason. The government, being an oligarchy, will instil submissiveness into the great bulk of the population…It is possible that it may invent ingenious ways of concealing its own power, leaving the forms of democracy intact, and allowing the plutocrats or politicians to imagine that they are cleverly controlling these forms…whatever the outward forms may be, all real power will come to be concentrated in the hands of those who understand the art of scientific manipulation” – Bertrand Russell, The Scientific Outlook There is a fever sweeping over the western world.

5G Environmental and Human Health Part 2: Educational Webinar. Ann Bressington Exposes Agenda 21, Club of Rome. Swedish child climate activist reportedly a tool of Al Gore–linked corporate green hucksters. Kids are great tools for big money and major powers lurking in the shadows, attempting to enact a political agenda. The latest instance, and it's a doozy, is young Greta Thunberg, the Swedish child climate activist who's coming to the states (with a big carbon footprint, according to today's piece by Thomas Lifson) to persuade us all to jump in on the global warming cavalcade of green laws to restrict our own freedoms — which, as it happens, will just coincidentally make the green elites even richer.

No wonder they're the shadowy forces bankrolling her peregrinations. According to a report that ran in The Times (subscription only), titled "Greta Thunberg and the plot to forge a climate warrior," green corporate energy companies looking to turn a profit from green contracts were behind the young Greta's much ballyhooed rise from the beginning. Julia Ratsey - J.D. Waterhouse 2 years ago (edited) Here's... "Maurice Strong" The godfather of Climate Change/Alan Watt Visualized. Climate Change explained by Geologist Ian Plimer to the UK government. Citizens Assemblies = End Of Choice. Wrongkindofgreen. Manufacturing of Greta Thunberg_Political Economy of the Nonprofit Ind. Complex (Act I) by The Words of Others. The Anti-Industrial Revolution. HOW DARE YOU: 10 reasons not to believe climate change criers.