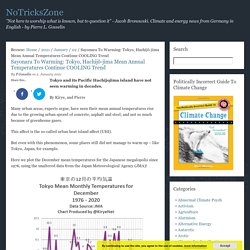 By Kirye, and Pierre Many urban areas, experts argue, have seen their mean annual temperatures rise due to the growing urban sprawl of concrete, asphalt and steel, and not so much because of greenhouse gases. This affect is the so-called urban heat island affect (UHI). Greta Thunberg’s Scandinavia Has Seen August Cooling Trend Over The Past Quarter Century. By P Gosselin on 13. 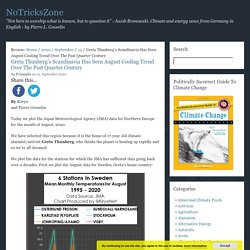 September 2020. Holly, Colorado Has Had A Distinct Cooling Trend Since 1900. Hi, everyone. 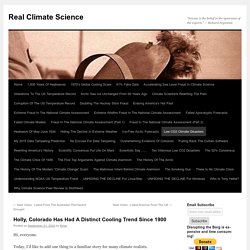 Today, I’d like to add one thing to a familiar story for many climate realists.Please pay attention to the animation chart below. The annual temperature in Holly, Colorado has had a distinct cooling trend since 1900.However, NASA didn’t like that, so they changed the data. As you know, there are many similar cases.

Examples: here and here. Some people still don’t know those facts, so I will continue to make charts. Chama, New Mexico Has Had A Cooling Trend Since 1890. Hi, everyone. 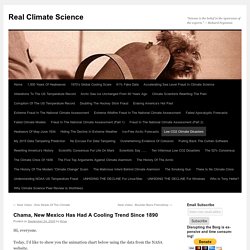 Today, I’d like to show you the animation chart below using the data from the NASA website. As shown on the chart, the annual temperature in Chama, New Mexico has had a cooling trend of approximately 0.5℃ since 1890, but NASA changed the data. You might have already seen a lot of similar cases. Examples: here and here. Unfortunately, many people still haven’t heard any such reports from the media. Quixeramobim, Brazil Had A Cooling Trend From 1896 To 2019. Hi, everyone. 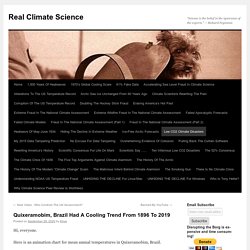 Here is an animation chart for mean annual temperatures in Quixeramobim, Brazil. As you can see, GHCN V3 Unadjusted data show Quixeramobim had a cooling trend since 1896, while V4 Unadjusted data show a warming trend. According to NASA, both are unadjusted data, but they aren’t in agreement. To make matters worse, as I tweeted July 21 2019, NASA used to claim that GHCN-Unadjusted is the raw data as reported by the weather station, but now they changed their explanatory text. Once you see the post, you can easily see what I mean right away. Then, let’s look at the GHCN V2 data set. Surprise: North Atlantic Region Has Cooled By Almost 1°C Over Past 120 Years. By P Gosselin on 15. 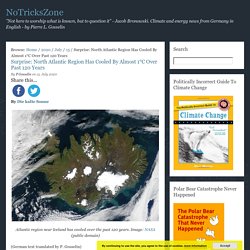 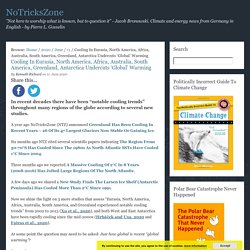 June 2020 In recent decades there have been “notable cooling trends” throughout many regions of the globe according to several new studies. A year ago NoTricksZone (NTZ) announced Greenland Has Been Cooling In Recent Years – 26 Of Its 47 Largest Glaciers Now Stable Or Gaining Ice. Six months ago NTZ cited several scientific papers indicating The Region From 50-70°S Has Cooled Since The 1980s As North Atlantic SSTs Have Cooled 1°C Since 2004.

Three months ago we reported A Massive Cooling Of 2°C In 8 Years (2008-2016) Has Jolted Large Regions Of The North Atlantic. A few days ago we shared a New Study Finds The Larsen Ice Shelf (Antarctic Peninsula) Has Cooled More Than 2°C Since 1991. Data Show Rural American Midwest Cooled Over Past 100 Years – Until NASA Fudged The Data To Show Warming. By Kirye (photo right) and Pierre Gosselin Today we post before-and-after mean annual temperature charts for 6 US stations in the midwest region with a low brightness index (BI), meaning low impact from the urban heat island (UHI) effect, which arises from widespread asphalt, concrete and infrastucture. 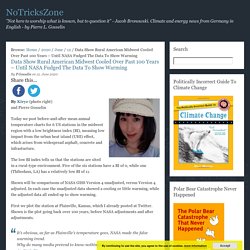 The low BI index tells us that the stations are sited in a rural-type environment. Five of the six stations have a BI of 0, while one (Thibodaux, LA) has a relatively low BI of 11. Shown will be comparisons of NASA GISS Version 4 unadjusted, versus Version 4 adjusted. In each case the unadjusted data showed a cooling or little warming, while the adjusted data all ended up to show warming. First we plot the station at Plainville, Kansas, which I already posted at Twitter.

It's obvious, as far as Plainville's temperature goes, NASA made the false warming trend.Why do many media pretend to know nothing about that? Data source: NASA GISS. Next we move to the station of Hobart, Oklahoma. Warmest Midwest Stations Cooling The Fastest. 84% Of Midwest Stations Cooling During Summer. The graph below plots all 1,999,843 summer maximum temperature readings at all 191 Midwest USHCN stations since 1895, with trend lines. 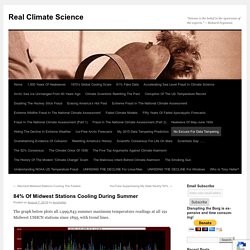 Eighty-four percent of the stations are cooling. Ohio and Indiana are cooling the fastest. The center of the histogram is around a cooling rate of 1.9 degrees F per century. Real Climate Science. 2 More New Climate Reconstructions Indicate Rapid COOLING In The Last 100+ Years. By Kenneth Richard on 22. 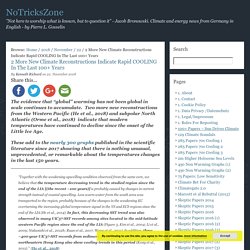 November 2018 The evidence that “global” warming has not been global in scale continues to accumulate. Two more new reconstructions from the Western Pacific (He et al., 2018) and subpolar North Atlantic (Orme et al., 2018) indicate that modern temperatures have continued to decline since the onset of the Little Ice Age. These add to the nearly 300 graphs published in the scientific literature since 2017 showing that there is nothing unusual, unprecedented, or remarkable about the temperatures changes in the last 150 years. The Northern Hemisphere Cooled By -0.6°C From 1958-’63. That Cooling Has Now Vanished. Back in 1975, when there was still considearable concern about decades of Northern Hemisphere cooling, the National Academy of Sciences (NAS) announced in their report that the end of the current interglacial could arrive sooner than thought. “[T]here is a finite probability that a serious worldwide cooling could befall the earth within the next hundred years.”

Image Source: NAS, 1975, Understanding Climatic Change The NAS cooling concerns were substantiated by a 1973 scientific paper published in Nature that quantified a sharp cooling surge from 1958 to 1963. According to Starr and Oort (1973), about 175,000 measured monthly temperatures for “92% of the atmosphere” indicated that the Northern Hemisphere cooled by -0.6°C during 1958-’63. The Region From 50-70°S Has Cooled Since The 1980s As North Atlantic SSTs Have Cooled 1°C Since 2004. By Kenneth Richard on 7. November 2019 Large regions of the globe have been cooling or not warming in recent decades according to several new scientific papers. A new paper shows the West Antarctic Ice Sheet (WAIS), sea surface temperatures near southern Chile, and the entire region between 50-70°S have cooled or not warmed since the early 1980s (Collins et al., 2019).

By Kenneth Richard on 21. February 2019 Scientists identify more regions of the world that haven’t warmed up – and have, instead, cooled – since the early 1900s. Data From German Mountain Stations Show Winters Have Been Getting COLDER Over Past 30 Years! In a new information video at FMD’s TV-Channel, man-made climate warming skeptic Günther Aigner analyzes winter temperatures at four German mountain stations over 1000 m altitudes at different locations in Germany. Fading Warming…More Cooling: Winters At Austria’s Ischgler Idalpe Have Become 1.3°C COLDER Over Past 30 Years!