Cooling Down the Hysteria About Global Warming. Guest essay by Rich Enthoven Recently, NASA released its annual report on global temperatures and reported that 2018 was the fourth hottest year on record, surpassed only by three recent years. 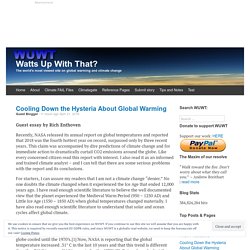 This claim was accompanied by dire predictions of climate change and for immediate action to dramatically curtail CO2 emissions around the globe. Like every concerned citizen read this report with interest. I also read it as an informed and trained climate analyst – and I can tell that there are some serious problems with the report and its conclusions. For starters, I can assure my readers that I am not a climate change “denier.”

NASA is now reporting significant changes to the global temperature. Land Temperatures It turns out, that over long periods of time it is actually quite difficult to measure temperature changes from climate consistently. Climate Modellers Waiting for Observations to Catch Up with Their Predictions. Guest essay by Eric Worrall h/t Dr. Willie Soon; In climate science, when your model predictions are wrong, you wait for the world to correct itself. New climate models predict a warming surgeBy Paul VoosenApr. 16, 2019 , 3:55 PMFor nearly 40 years, the massive computer models used to simulate global climate have delivered a fairly consistent picture of how fast human carbon emissions might warm the world.

But a host of global climate models developed for the United Nations’s next major assessment of global warming, due in 2021, are now showing a puzzling but undeniable trend. Untitled Document. The Pale Blue Dot Baloney Detection Kit Warning signs that suggest deception. 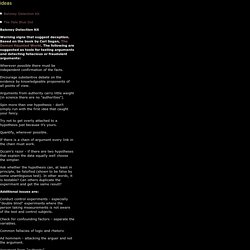 Based on the book by Carl Sagan, The Demon Haunted World. The following are suggested as tools for testing arguments and detecting fallacious or fraudulent arguments: Wherever possible there must be independent confirmation of the facts. The 'Cult' of Climate Change (née Global Warming) Guest essay by Ari.H. 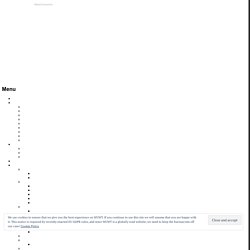 Global warming has become a religion This is the opinion of Nobel Prize Winning Physicist Dr. Ivar Giaever , Prof. The Difference Between Climate And Weather. When Arctic sea ice extent was low for a few days in September, that was climate. 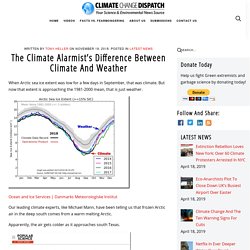 But now that extent is approaching the 1981-2000 mean, that is just weather. Ocean and Ice Services | Danmarks Meteorologiske Institut Our leading climate experts, like Michael Mann, have been telling us that frozen Arctic air in the deep south comes from a warm melting Arctic. Apparently, the air gets colder as it approaches south Texas. A warming Arctic can actually make our winters colder | Popular Science.

Is the climate change movement a ‘cult’? Climate Change And The Ten Warning Signs For Cults Reposted from Medium Have you thought to yourself that the Climate Change movement seems more and more like a religious movement? I have, so I researched how to identify a religious cult. Roger Pielke Jr.: climate science is a grab for power. Summary: Politics infuses all realms of American society, including science. Roger Pielke Jr explains how science has become a way to take control – for the best of motives. It shows the eternal will to power that lies within each of us, released from its institutional leashes.

It is a corruption we cannot afford. “Planetary Boundaries as Power Grab“ By Roger Pielke Jr. at his website, 4 April 2013. Writing at the Huffington Post UK, Professor Melissa Leach, Director of the Social, Technological and Environmental Pathways to Sustainability Centre at Sussex University, asks a provocative question. More tropical cyclones in a cooler climate? - Sugi - 2015 - Geophysical Research Letters. Abstract Recent review papers reported that many high‐resolution global climate models consistently projected a reduction of global tropical cyclone (TC) frequency in a future warmer climate, although the mechanism of the reduction is not yet fully understood. 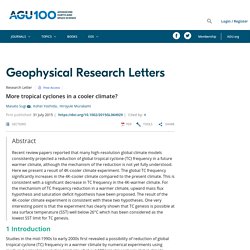 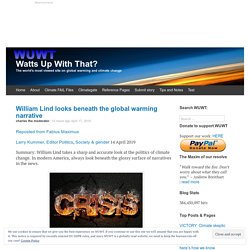 NoHype Weather -April Snowstorms: The Rule, Not the Exception. By Chris Martz Last week, the Great Plains and upper Midwest were pummeled with a late-season blizzard. 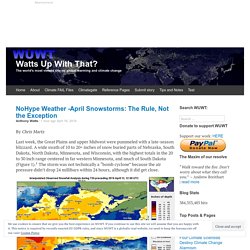 A wide swath of 10 to 20+ inches of snow buried parts of Nebraska, South Dakota, North Dakota, Minnesota, and Wisconsin, with the highest totals in the 20 to 30 inch range centered in far western Minnesota, and much of South Dakota (Figure 1).¹ The storm was not technically a “bomb cyclone” because the air pressure didn’t drop 24 millibars within 24 hours, although it did get close. The highest official snowfall report was 30.8 inches in Wallace, South Dakota, although higher amounts in scattered areas were more than likely.² On top of that, an ice storm occurred in numerous Midwestern states, a dust storm moved through the southern Plains, and 80 mph wind gusts were observed in Texas and New Mexico, while thundersnow was reported in other locations.²

Goremongering and Mannhandling the reality of winter weather ‘bombs’ This happened a couple of days ago, where Gore quotes failed climate science promoter (note Dr. 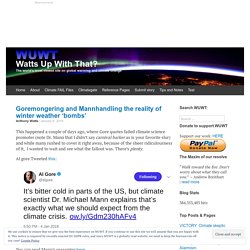 Mann that I didn’t say carnival barker as is your favorite slur) and while many rushed to cover it right away, because of the sheer ridiculousness of it, I wanted to wait and see what the fallout was. There’s plenty. Al gore Tweeted this: You can read Mann’s reasoning here. Predictability limit: Scientists find bounds of weather forecasting – it’s 2 weeks. From Penn State University and the “but we guarantee you there’s no predictability limit in climate science” department comes this interesting study. 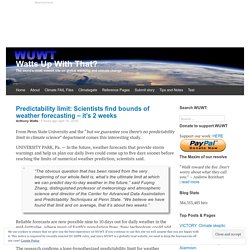 UNIVERSITY PARK, Pa. — In the future, weather forecasts that provide storm warnings and help us plan our daily lives could come up to five days sooner before reaching the limits of numerical weather prediction, scientists said. Does The Climate-Science Industry Purposely Ignore A Simple Aspect of Strong El Niño Events That Causes Long-Term Global Warming? It was a little more than 10 years ago that I published my first blog posts on the obvious upward steps in the sea surface temperatures of a large portion of the global oceans…upward steps that are caused by El Niño events…upward steps that lead to sunlight-fueled, naturally occurring global warming. 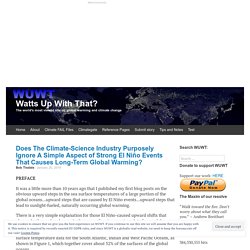 There is a very simple explanation for those El Niño-caused upward shifts that also make themselves known in the sea surface temperature data for much larger portion of the global oceans than I first presented a decade ago…the upward steps that are blatantly obvious in the satellite-era (starts November 1981) of sea surface temperature data for the South Atlantic, Indian and West Pacific Oceans, as shown in Figure 1, which together cover about 52% of the surfaces of the global oceans.