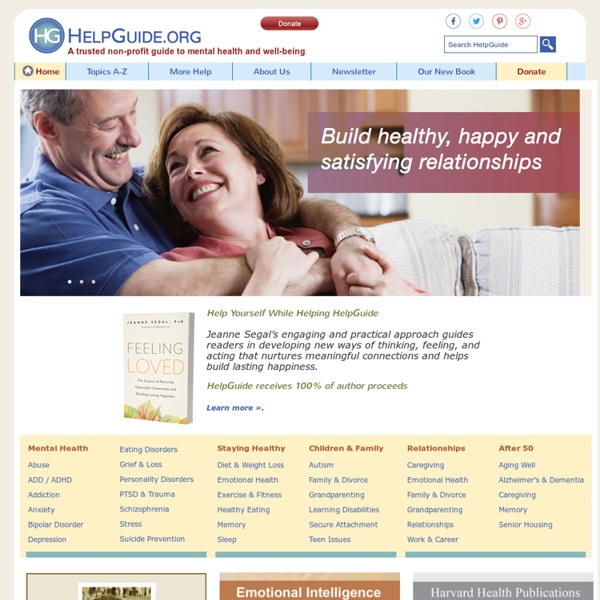 The road to depression recovery Recovering from depression requires action, but taking action when you’re depressed is hard. In fact, just thinking about the things you should do to feel better, like going for a walk or spending time with friends, can be exhausting. It’s the Catch-22 of depression recovery: The things that help the most are the things that are the most difficult to do. Start small and stay focused The key to depression recovery is to start with a few small goals and slowly build from there. Take things one day at a time and reward yourself for each accomplishment. Depression self-help tip 1: Cultivate supportive relationships Getting the support you need plays a big role in lifting the fog of depression and keeping it away. The thought of reaching out to even close family members and friends can seem overwhelming. Turn to trusted friends and family members. 10 tips for reaching out and building relationships Talk to one person about your feelings. Think outside yourself.

10 ways to try beat depression Depression is a gripping, horrible and very sad illness. And at some point in most peoples lives, it will happen. Depression can come in many ways and different people will react differently to depression. It can happen for many reasons, bereavement, illness divorce or the break down of a relationship, money worries or fear from past events. These top ten ways to try beat depression and based on tried and tested idea's used on myself and others I know. If you try one or two a day, things may improve. 1. Serotonin is the often known as the happy hormone. Exercise is an excellent way to boost your serotonin levels. Serotonin Boosting Foods- Turkey- Have you ever realised after that Turkey dinner why your so relaxed and ready to sleep. Fish and SeaFood- Wild Salmon, Tuna and Mackerel and all oily fish is brilliant to not only fight against depression but boost your brain power, such as memory and concentration. 2. Cross Word or Quiz Sites online. Become a volenteer to the less Fortunate.

14 Things Positive People Don't Do Positive people don’t have a magical power that you don’t possess. Instead of letting stress control them, positive people take control of their life by managing stress and striving to improve every day. Check out these things that positive people don’t do, so you too can be happy and successful. 1. It’s amazing how many problems wouldn’t exist if we didn’t invent them. 2. It’s easy to live in a lie because lies can grow so strong that it can eventually make people forget about the truth. 3. Positive people understand that resentment only causes pain in life over and over again, so they let go of it. 4. Is it easy to forget the little things? 5. Positive people realize they are the CEO of their life and thus take full responsibility for how things are. 6. The word “problems” is seen as “challenges” for positive people. 7. This “reality” most people speak of sounds like a dreadful place where dreams go to die. 8. 9. Boredom is a place where creativity, inspiration, and productivity die.

I thought I was just trying to beat depression in a one-off fight Alan O’Mara is a successful GAA player. He was the Cavan goalkeeper during the 2011 U21 campaign – the team won the Ulster Championship and reached the All-Ireland final – and is currently on the county’s senior football panel. Yesterday, he published an article on the GAA’s website entitled Living with Depression: A Footballer’s Story. It is reproduced here, in full, with his kind permission. I AM AN Ulster champion. I know I should feel privileged after winning a provincial title earlier in 2011 but I don’t. My drive and focus have left me. It’s three days after Christmas in 2011 and I am gazing at the flickering flame in the fireplace at my family home. There is a voice in my head telling me to stay right where I am. The pitch we are slogging away on is barely lit. My mind is away in the clouds, wondering why football is not enjoyable to me anymore. After training I stay with a team-mate. Me? I glance around the room to see if there is a TV; no joy. ©INPHO/Cathal Noonan

11 ways to beat depression naturally The other day I saw a report that said that one in 10 Americans older than 12 take antidepressants. That seems sad to me. But what was truly shocking was that less than a third of the people taking these drugs have seen a mental health professional in the last year — and most people who take these drugs don't need them. I am not a doctor, but I have had periodic bouts of deep depression in my life ... tell me, who hasn't? 1. 2. 3. 4. 5. 6. 7. 8. 9. 10. 11. Now, I'm really going to sound like my mother when I say this, but I'm going to say it anyway: Always remember that after the darkest storm is when the rainbows come out. Related natural remedy stories on MNN:

Selling Software To Large Businesses Understanding The B2B Purchasing Cycle So You Can Exploit It Most folks reading this have seen one-half of the B2B purchasing cycle at their day jobs: they fill out a form or ask a manager for X (a copy of MSOffice, a new computer, etc), and six weeks later X arrives. You may have wondered whether the intervening six weeks required dark rituals of eldritch power. 1. 2. 3. 4. 5. 6a. 6b. 7. The Easiest Hack Around The Purchasing Process All internal users hate the purchasing process because it inhibits their ability to get work done. Because the whole rigamarole costs several hundred dollars in employee salary to approve any PO, most internal Purchasing Departments have a few enumerated exceptions. Some businesses do not have a corporate card available and will request to pay by PO all of the time. Dealing With The "You're Not Big Enough" Objection You may be dealing with a larger transaction than the $500 exemption or with a more conservative business than the typical megacorp.

Hundred Goals | Inspiration to Live Your Dream 25 Things To Let Go Of Before Your Next Birthday Imagine what we’d all look like if we wore our worries on the outside. If there were some physical manifestation of our emotional baggage and hang-ups, we’d all be unrecognizable. If you find yourself thinking sometimes that you’re not who you should be, it’s time to explore ways to kick that feeling to the curb and look at how to change things in a healthy way. Here are 25 things to let go of that we could all stand to ditch by our next birthdays. 1. We were built to pursue greatness and to perform to the best of our abilities. 2. We’re all our brother’s keepers in one way or another, but letting the burdens of others consume and rule over your own life isn’t healthy. 3. Most of us tend to think that other people judge us much more harshly than they actually do. 4. It’s almost a cliché by now to point out how badly our body images have been warped by the media. 5. 6. Regret is like a poison; left untreated, it can kill you. 7. 8. 9. 10. 11. 12. We all have responsibilities. 13. 14. 15.

13 Things to Remember When Life Gets Rough We’ve all gone through hard times. And we all get through them. However, some get through them better than others. 1. Buddha’s famous saying tells us: “It is your resistance to ‘what is’ that causes your suffering.” 2. Many times, we are our own worst enemy. 3. Your outer world is a reflection of your inner world. 4. You should just wipe the word “failure” right out of your vocabulary. 5. That’s hard to believe sometimes, I know. 6. This moment will never come again. 7. Most people live with “attached mind.” 8. Fear can be a great teacher. 9. Believe it or not, I know way too many people who don’t allow themselves to have fun. 10. But if you do compare yourself, compare yourself with people who have it worse than you. 11. You need to get out of your own way. 12. “And this too shall pass” is one of my favorite sayings. 13. Miracles happen every day.

Why Are Some People So Critical? - Steven Berglas by Steven Berglas | 12:00 PM March 6, 2014 Harsh critics are often talented, intelligent, and productive people. Unfortunately, they have a flaw that compels them to disparage others – almost, at times, as though they are diagnosing an illness in need of eradication. It seems they’re living according to the famous quip by Mark Twain: “Nothing so needs reforming as other people’s habits.” In the language of the self-help and recovery movements, these folks are often suffering from a disorder known as, “If You Spot It, You Got It [IYSIYGI].” What makes this dynamic so ugly is that unbeknownst to the person under attack, the critic is being driven to criticize by a repressed-and-intolerable feeling that he’s “got” what he deplores in others. For instance, years ago a client of mine and I were having dinner when he asked if I could help with a dilemma: “Diane, my comptroller, a woman 100% dedicated to the business, is also nastier than a junkyard dog.

It's a Hard-Knock Life for Freelancers Although some 9-to-5ers may envy the life of a freelancer, it's not always as easygoing as it looks. For starters, there's the money. Paydays are irregular and for some reason, checks always seem to be stuck in the mail. Then there's the shameful self-promotion, gigs falling through and parents that just don't understand — the list goes on. To highlight the woes and frustrations of freelancing, Garlic Jackson Comedy made this funny and oddly accurate parody, appropriately sung to the tune of Annie's "It's a Hard-Knock Life. "It's a Freelance Life," written by comedy writer Zack Bornstein, takes you through the daily problems of a freelancer in the modern age. Have something to add to this story?

Tech Trends 2014: Inspiring Disruption Help! My Wife Wants a Divorce, But I Don’t! What Can I Do? | husbandhelphaven “My Wife Wants Divorce, but I Don’t. I don’t understand where this came from, and I have no idea how I can get my wife back…What should I do?” As you continue reading, I’m going to walk you through several of the common reasons why your wife thinks she wants a divorce, and then once were done with that, I’m going to explain to you what you can do to change your wife’s mind. I’m not talking about psychological mind games or Jedi mind tricks, just a good old fashioned understanding of relationships and women. But enough talk, let’s get to the meat and potatoes, shall we? First Things First; Understanding Why My Wife Wants Divorce There are a number of reasons that could explain why your wife wants divorce. What I’d like to do in this section is talk with you about a few of the most common thoughts that enter a forlorn wife’s head when she is unhappy in a marriage. Reason #1. Let’s face it, marriage gets boring. Recommended Reading – How to Show Your Wife You Love Her Reason #2. Reason #3.