10 well paid jobs of the future 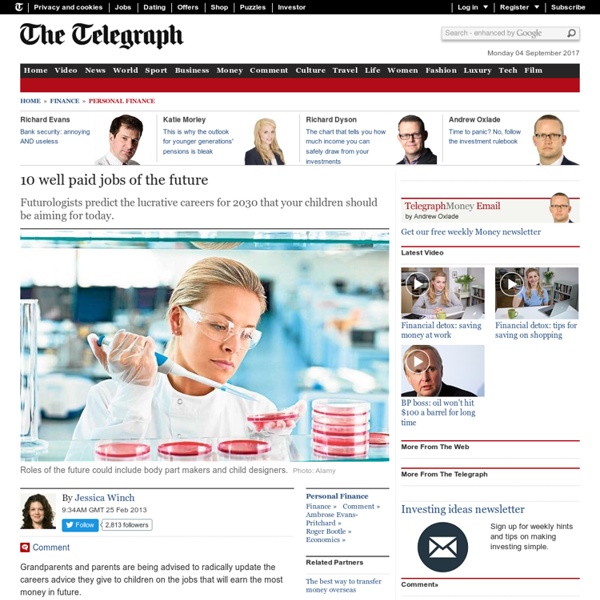 Mr Bellini posited the idea of an elderly well-being consultant, who specialises in personalised care for older patients, or a memory augmentation surgeon who helps counter memory loss. He also saw big changes in farming as food resources became scarce, with genetically modified crops becoming common and crops grown vertically in areas resembling multi-storey car parks to save space. Ian Pearson, a futurologist who wrote You Tomorrow, sees job growth in the field of augmented reality, where the real world is overlaid with computer-generated images. “When you look at a building it’s constrained by planning laws, but in cyberspace you can make it look however you want,” he said. “A company with a high street presence could make their shop look like Downton Abbey, or set it in a post-nuclear apocalypse environment.” Mr Pearson also argued that the better technology gets, the more people will have to focus on their “human skills” to survive in the workforce. Best paid jobs of today Related:  Skills for Future Jobs

The Future of Work: Quantified Employees, Pop-Up Workplaces, And More Telepresence For many people, especially those working at desk jobs, the workplace is very different than it was 20 years ago: there’s a computer at every desk, telecommuting is fairly common, and the traditional cubicle is giving way to more collaborative spaces. We’ve seen predictions about where we’ll go from here before; now PSFK, a popular blog that also happens to be a thriving consultancy, has come up with its own version of the future of work, described in a new 138-page report. It’s not as fantastical as many future-forward reports--it’s planted firmly in ideas that are already gaining a lot of traction. Perhaps that makes it more accurate. We’ll find out. Here are our takeaways. Startup Training and Skills Marketplaces PSFK imagines that learning initiatives for young entrepreneurs, such as Enstitute, will become the norm. Office Feedback Culture You know the employee that keeps screwing up and eventually just gets fired without really understanding why? Quantified Workers

Future of Work: What Skills Will Help Us Keep Pace? From Elon Musk’s tweet that artificial intelligence may be more dangerous than nuclear weapons to the growing clamor of voices warning robots will take away our jobs, it is clear we are focusing more on the problems of AI, robotics, and automation than the solutions. While the problems are real and should be taken into account, social innovators around the world are already working to deliver solutions. It’s true that today’s technology is reworking the economy and our role in it. But this needn’t herald economic end times. To smooth the transition, we need to ensure that displaced workers have the resources to learn new work and children are given a good head start. This is nothing new. During the Industrial Revolution, in the US, we demanded every child attend school and learn reading, writing and math. Throughout the 20th century, humanity poured tremendous resources into ensuring every human develop these skills as technologies advanced. Image Credit: Ashoka; Shutterstock.com

The 10 Most Important Work Skills in 2020 Share this infographic on your site! <a href=" src=" alt="Important Work Skills for 2020" width="500" border="0" /></a><br />Source: <a href=" The 10 Most Important Work Skills in 2020 Future Work Skills of 2020: Sources: If Schools Don't Change, Robots Will Bring On a 'Permanent Underclass': Report Robots are taking all the jobs. But are we, the average, moderately skilled humans, screwed, or aren't we? Let me just get it out of the way now: We are, unless there are drastic, immediate changes to education and economic systems around the world. The dominant narrative going around today about Pew Research's new report on artificial intelligence and the future of jobs is that experts can't really decide whether automation is going to make working obsolete, that it's really a toss up whether robots will simply create new jobs in other sectors as they destroy ones in other. That's true, in one sense: The 1,896 futurists, CEOs, journalists, and university professors questioned for the report were split in half over robots will "displace significant numbers of both blue- and white-collar workers," with 52 percent of respondents agreeing that "human ingenuity will create new jobs, industries, and ways to make a living, just as it has been doing since the dawn of the Industrial Revolution."

Six Soft Skills Everyone Needs | Monster.com By Larry Buhl, for Yahoo! HotJobs In a 2008 survey of more than 2,000 businesses in the state of Washington, employers said entry-level workers in a variety of professions were lacking in several areas, including problem solving, conflict resolution and critical observation. You'll likely see these "soft skills" popping up in job descriptions, next to demands for technical qualifications. Employment experts agree that tech skills may get you an interview, but these soft skills will get you the job -- and help you keep it: Communication SkillsThis doesn't mean you have to be a brilliant orator or writer. Teamwork and CollaborationEmployers want employees who play well with others -- who can effectively work as part of a team. AdaptabilityThis is especially important for more-seasoned professionals to demonstrate, to counter the (often erroneous) opinion that older workers are too set in their ways. Problem SolvingBe prepared for the "how did you solve a problem?"

LEGAL FUTURES Report: artificial intelligence will cause "structural collapse" of law firms by 2030 1 December 2014 AI: computers that ‘think’ spell doom for many lawyers Robots and artificial intelligence (AI) will dominate legal practice within 15 years, perhaps leading to the “structural collapse” of law firms, a report predicting the shape of the legal market has envisaged. Civilisation 2030: The near future for law firms, by Jomati Consultants, foresees a world in which population growth is actually slowing, with “peak humanity” occurring as early as 2055, and ageing populations bringing a growth in demand for legal work on issues affecting older people. This could mean more advice needed by healthcare and specialist construction companies on the building and financing of hospitals, and on pension investment businesses, as well as financial and regulatory work around the demographic changes to come; more age-related litigation, IP battles between pharmaceutical companies, and around so-called “geriatric-tech” related IP. The human part of lawyering would shrink. By Dan Bindman

Low wages not education to blame for STEM skills gap -- ScienceDaily Low wages rather than inadequate training are to blame for the STEM skills gap, according to research from the University of Warwick. A new briefing paper suggests that the lack of workers with skills in science, maths, engineering and technology (STEM) and 'soft' communications skills is not due to problems with the education system, but to employers being unwilling to offer higher wages to suitably skilled workers. The research was conducted by Dr Thijs van Rens associate professor in the Department of Economics. He said: "It is often taken for granted that the skills gap and skills mismatch is a supply problem and appropriate training is not available to workers. "Businesses complain about the lack of workers with STEM skills but are unwilling to raise wages for these workers -- or reduce wages for workers with skills that are less in demand." A discussion of Dr van Rens' policy briefing paper titled The Skills Gap: Is It a Myth?

AI will foster an era of 'superhuman' workers, says Google X founder Reddit Tweet Share Email During the 2018 World Government Summit in Dubai this week, Google X co-founder Sebastian Thurn stated that artificial intelligence innovations would usher in an era of “superhuman” workers who are capable of doing far more work than what is conventionally possible. Thurn asserted that AI-based solutions, no matter how advanced, are tools designed to augment the productivity of humans. “AI is a tool and what AI can do really, really well is getting rid of repetitive work. Thurn, however, did admit that some trades in the workforce are bound to be adversely affected by the incoming AI revolution. “Now, that means that some jobs will go away, very repetitive work, of course. The Google X co-founder’s optimistic outlook mirrors that of futurist Ray Kurzweil, who issued equally optimistic expectations for AI during a discussion held at the Council of Foreign Relations last November. “My view is not that AI is going to displace us. Interested in solar?