Earth's magnetic field broke down 42,000 years ago and caused massive sudden climate change. The world experienced a few centuries of apocalyptic conditions 42,000 years ago, triggered by a reversal of the Earth’s magnetic poles combined with changes in the Sun’s behaviour. 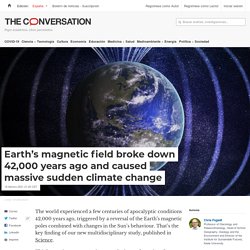 That’s the key finding of our new multidisciplinary study, published in Science. This last major geomagnetic reversal triggered a series of dramatic events that have far-reaching consequences for our planet. They read like the plot of a horror movie: the ozone layer was destroyed, electrical storms raged across the tropics, solar winds generated spectacular light shows (auroras), Arctic air poured across North America, ice sheets and glaciers surged and weather patterns shifted violently.

During these events, life on earth was exposed to intense ultraviolet light, Neanderthals and giant animals known as megafauna went extinct, while modern humans sought protection in caves. The magnetic north pole – where a compass needle points to – does not have a permanent location. Ancient trees. Global heating: best and worst case scenarios less likely than thought. Doomsayers and hopemongers alike may need to revise their climate predictions after a study that almost rules out the most optimistic forecasts for global heating while downplaying the likelihood of worst-case scenarios. 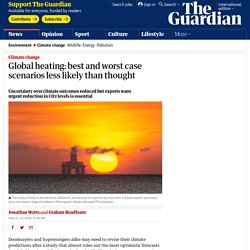 The international team of scientists involved in the research say they have narrowed the range of probable climate outcomes, which reduces the uncertainty that has long plagued public debate about this field. Their increased confidence about the sensitivity of the climate should ease the job of policymakers and diminish the scope for scepticism but it is far from reassuring for the future of the planet. Shrinking Ozone Hole, Climate Change Are Causing Atmospheric "Tug of War" The notorious Antarctic “ozone hole” sparked worldwide concern after its discovery in the 1980s, and for good reason — declining ozone allows harmful ultraviolet radiation to reach the Earth’s surface, a major threat to public health. 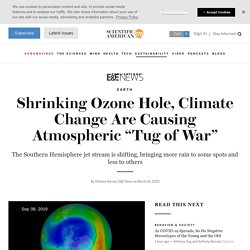 But the ozone hole had another effect on the planet: It caused major atmospheric changes in the Southern Hemisphere. With less ozone trapping solar radiation higher in the atmosphere, the stratosphere began to cool. The jet stream shifted toward the South Pole. The warm, wet tropics expanded, and the dry zone below the tropics shifted southward, as well. Apo nid277911 1413056. AAS: What is climate change? Climate change is a change in the pattern of weather, and related changes in oceans, land surfaces and ice sheets, occurring over time scales of decades or longer Weather is the state of the atmosphere—its temperature, humidity, wind, rainfall and so on—over hours to weeks. 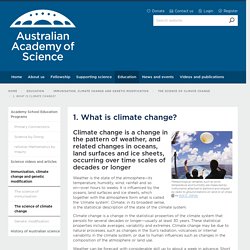 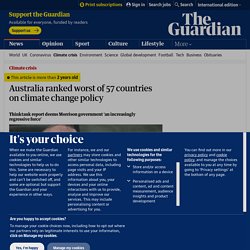 The report also criticises the Morrison government for being a “regressive force” internationally. The 2020 Climate Change Performance Index, prepared by a group of thinktanks comprising the NewClimate Institute, the Climate Action Network and Germanwatch, looks at national climate action across the categories of emissions, renewable energy, energy use and policy. Scott Morrison brings coal to question time: what fresh idiocy is this? There is no way you can write the sentence, “The treasurer of Australia, Scott Morrison, came to question time with a lump of coal on Thursday,” and have that sentence seem anything other than the ravings of a psychedelic trip, so let’s just say it and be done with it. 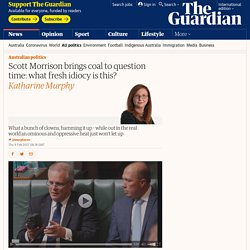 Scott Morrison brought coal into the House of Representatives. A nice big hunk of black coal, kindly supplied by the Minerals Council of Australia. “This is coal,” the treasurer said triumphantly, brandishing the trophy as if he’d just stumbled across an exotic species previously thought to be extinct. “Don’t be afraid,” he said, soothingly, “don’t be scared.” No one was afraid, or scared. Journalists sitting above the fray blinked, as if this might have been a mirage. The coal was passed from hand to hand, or some hands, anyway.

Australias emissions projections 2019 report. Climate tipping points — too risky to bet against. Politicians, economists and even some natural scientists have tended to assume that tipping points1 in the Earth system — such as the loss of the Amazon rainforest or the West Antarctic ice sheet — are of low probability and little understood. 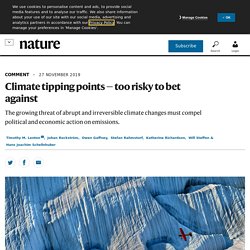 Yet evidence is mounting that these events could be more likely than was thought, have high impacts and are interconnected across different biophysical systems, potentially committing the world to long-term irreversible changes. Here we summarize evidence on the threat of exceeding tipping points, identify knowledge gaps and suggest how these should be plugged. We explore the effects of such large-scale changes, how quickly they might unfold and whether we still have any control over them. In our view, the consideration of tipping points helps to define that we are in a climate emergency and strengthens this year’s chorus of calls for urgent climate action — from schoolchildren to scientists, cities and countries. Ice collapse. Mr Morrison, I lost my home to bushfire. Your thoughts and prayers are not enough.

Fires of unprecedented number and ferocity are today raging in New South Wales and Queensland. 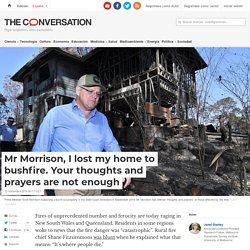 Residents in some regions woke to news that the fire danger was “catastrophic”. Rural fire chief Shane Fitzsimmons was blunt when he explained what that means: “It’s where people die.” I lost my home in Victoria’s 1983 Macedon bushfires. Fires in NSW caused by delayed monsoons in India, experts say. Updated about an hour agoSat 9 Nov 2019, 5:04am NSW's fire boss said the state had never seen anything like it before. 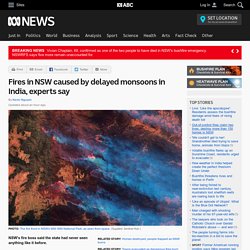 And, a weather system thousands of kilometres away is at least partly responsible, experts say. 'This report is a wake-up call': UN panel issues climate change warning. By national environment and science reporter Penny Timms Updated about 4 hours agoWed 25 Sep 2019, 11:03am Australia's affinity for the ocean is renowned, but it is likely to be dramatically disrupted, according to the latest report from the UN's Intergovernmental Panel on Climate Change (IPCC). 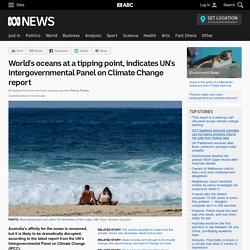 Key points: The UN's IPCC releases a new report on the world's oceans and frozen areas in a changing climate Australia can expect to see extreme coastal flooding every year and a 20 per cent decline in our fisheries over the next 80 years Scientists say the changes "can be minimised" if global warming is kept to less than 2C on pre-industrial levels. Pseudoscience is taking over social media – and putting us all at risk.

Search for “climate change” on YouTube and before long you’ll likely find a video that denies it exists. In fact, when it comes to shaping the online conversation around climate change, a new study suggests that deniers and conspiracy theorists might hold an edge over those believing in science. When climate change interferes with ability 'to listen to the earth' 24hoursofreality. Human Population Growth and Climate Change. The largest single threat to the ecology and biodiversity of the planet in the decades to come will be global climate disruption due to the buildup of human-generated greenhouse gases in the atmosphere. People around the world are beginning to address the problem by reducing their carbon footprint through less consumption and better technology.

But unsustainable human population growth can overwhelm those efforts, leading us to conclude that we not only need smaller footprints, but fewer feet. Portland, Oregon, for example, decreased its combined per-capita residential energy and car driving carbon footprint by 5 percent between 2000 and 2005. During this same period, however, its population grew by 8 percent. One of the study’s authors, Paul Murtaugh, warned that: “In discussions about climate change, we tend to focus on the carbon emissions of an individual over his or her lifetime. ClimateWorks. 4801d325365bccdbbb99a1ce8e8e9810. Australia in summer 2017–18. Thursday 1 March 2018 — Seasonal Climate Summary for Australia — Product Code IDCKGC1A00 TemperaturesRainfallExtremesImportant notesthe top In Brief An exceptionally warm summer for Australia; nationally the second-warmest summer on record Maxima and minima both exceptionally warm for Australia as a whole, though daytime temperatures cooler than average for Western Australia's northwest and interior Western Australia the only region to rank outside the top ten for summer mean temperature, associated with very much above average rainfall, particularly during January Consistently warm across eastern Australia in all three months Rainfall above average in Western Australia and the Top End of the Northern Territory, below average for most of eastern Australia; near average nationally Generally wetter than average for the west; drier than average for the east in each month, but December rainfall very much above average for parts of the southeastern mainland Temperatures Rainfall.

IPCC: Climate scientists consider 'life changing' report. Image copyright Jonas Gratzer It is likely to be the most critical and controversial report on climate change in recent years. Leading scientists are meeting in South Korea this week to see if global temperatures can be kept from rising by more than 1.5C this century. Climate-change-global-warming. Why the Coalition is misleading on meeting Australia's Kyoto 2020 carbon emissions target. Analysis By RMIT ABC Fact Check's economics and finance editor Josh Gordon Updated about 6 hours agoWed 17 Apr 2019, 1:22am The Morrison Government has long claimed Australia is on track to meet its international greenhouse gas emissions targets "in a canter". As recently as last week Prime Minister Scott Morrison said the Coalition had inherited an "abatement deficit" from Labor needed to hit Australia's 2020 target but had turned that around by 1.1 billion tonnes.

Or, as Energy Minister Angus Taylor put it in an interview on ABC's Insiders in March: "[Labor] hadn't got to the point where we were going to meet Kyoto. 4 Maps Show Opportunities for Limiting Climate Change - Resource Watch. 'We are last generation that can stop climate change' – UN summit. Titled. News. IAP - Climate Change Assessments, Review of the Processes & Procedures of the IPCC. IPCC Fifth Assessment Report. Graphic Novels. Interconnected risks and solutions for a planet under pressure - IGBP. References and further reading. ShiftN.com : clarity in complexity. Trump Will Withdraw U.S. From Paris Climate Agreement The New York Times. Climate Denial Was the Crucible for Trumpism.

Principles of Environmental Justice. Climate Outreach – The Uncertainty Handbook. El Niño is causing global food crisis, UN warns. How Australians were ready to act on climate science 25 years ago … and what happened next. Historical Responsibilities: Carbon Emissions in Context. CO2 Home. Nurture Nature sur Twitter : "You are here. [800,000 years of atmospheric CO2 levels up to now.] via @PeterGleick, climate scientist.