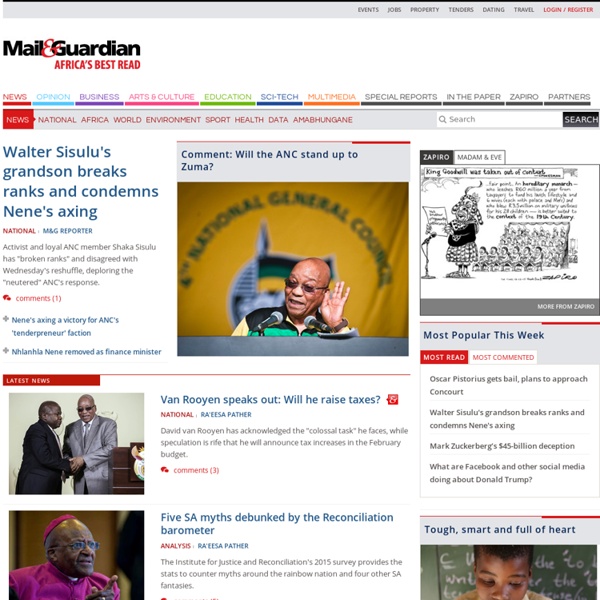 The Citizen Online National 5.5.2014 05.00 pm FILE PICTURE: An IEC official scans a green bar coded ID book at a voter registration center in Melville, Johannesburg, 10 November 2013. Picture: Tracy lee Stark The home affairs department has extended its office hours in the lead-up to and on election day, it said on Monday. The department would open all of its offices across the country on Wednesday from 7am to 9pm in line with voting hours to assist citizens with the voting process, spokesman Lunga Ngqengelele said in a statement.

GhanaWeb You are here: Home → News Headlines 2014-04-15 Headlines 2014-04-14 Business, Financial, Investment News on South Africa Political economy Police use water cannon to disperse rioters. Technology Average mobile and fixed broadband speeds reveal a country where things are back to front. Special Investigations Street Artist Charged with 56 Counts for Punking NYPD with Drone Poster Street artist Essan Attia is being charged with 56 criminal counts after planting dozens of mock public service posters around New York, advertising the NYPD's use of drones to monitor civilians. He was arrested in New York last week after being tracked down by an ill-humored police force. Attia's arrest followed on a video interview the artist gave with the arts and culture website Animal New York, in which he described some of his motivations—including his libertarian political leanings—and how he pulled off the stunt: As Reason.com reports:

Businessweek - Business News, Stock market & Financial Advice Productivity Fight Fatigue by Harnessing the Power of Your Internal Clock Sluggish? Tired? Seven tips for getting your body into better alignment. by Arianne Cohen LABOR - Germany's Air Berlin says will cut 900 jobs BERLIN - Agence France-Presse Germany's number two airline, Air Berlin, said on Tuesday it would slash about 900 jobs or nearly 10 percent of its workforce in a bid to get back in the black after nearly five years of losses.The troubled airline unveiled details of what it called its two-year "Turbine" programme extending across all its business divisions and focusing "on its key markets on the basis of a stringent business model"."'Turbine' has defined initiatives of around 400 million euros ($535 million) by the end of 2014 to achieve a lastingly competitive result," the company said in a statement."

Wiltshire shooting: Solicitor James Ward who was blasted in the head with a sawn-off shotgun as he sat in his office has died after three weeks in hospital Married father-of-three James Ward, 58, died in hospital surrounded by his familyProperty developer Michael Chudleigh had already been charged with attempted murderPolice say they will work with Crown Prosecution Service to ensure charges reflect Mr Ward's death By Helen Lawson Published: 16:32 GMT, 23 July 2012 | Updated: 16:37 GMT, 23 July 2012 A solicitor who was shot in the head at his firm's offices in Devizes has died of his injuries with his family by his side.