Opt Out From Online Behavioral Advertising By Participating Companies (BETA) 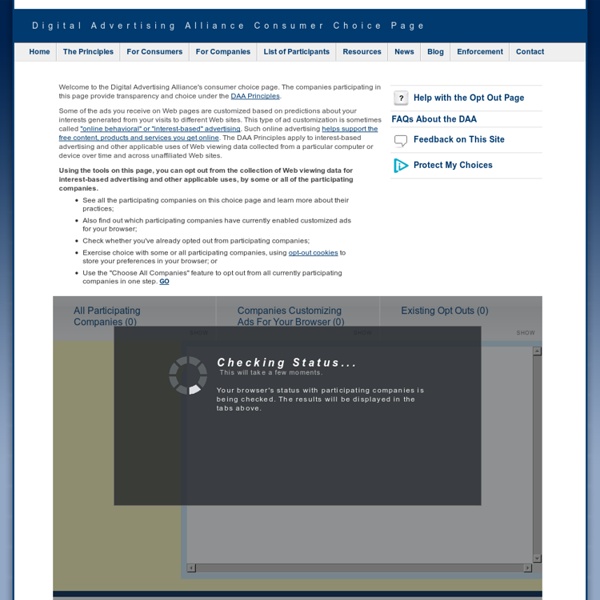 how to easily delete your online accounts Spring Financial is a finance company based in Canada. The company was founded in 2014. Spring Financial is a subsidiary of Canada Drives, which is a leading auto financing company in Canada. The Chief Executive Officer is Michael Galpin. Burner - Free Private Number ***FREE TO DOWNLOAD, INCLUDES ONE FREE NUMBER GOOD FOR 7 DAYS ***Burner helps keep your mobile phone number more private and secure. Make calls and send texts from new numbers. Receive calls, texts and voicemails on your Burner private number. Find a new number in any area code. Burn your number anytime and calls to that number will simply receive an “out of service” message.***Need help?

Mozilla Lightbeam Shows Who's Watching You Online In the spirit of online transparency, and for those paranoid about organizations watching your every move, a new tool from Mozilla lets you monitor who is following your digital footprint. Lightbeam is a free extension available for download on Mozilla's Firefox browser that promises to "illuminate the inner workings of the web." It uncovers which third-party companies are watching your online activity — most likely brands and advertisers looking to share your data or directly target ads.

A Girl Who Codes Nikita Rau is a high school senior and, at this moment, drinking applekiwi-strawberry juice out of a plastic cup. We're in the cafeteria of Bronx High School of Science, in New York. The noise level is high--too high for older ears--but the kids seem excited. Or maybe frenzied would be a better word. It's around 3:30 p.m. on the second Monday of the new school year, otherwise known as club-fair day.

HashNotes GNotes is one of the best note apps for android that helps you to take and sync notes easily between your mobile devices, make your life organized and much more easier. It’s easy-to-use and free! ** The notes will be disappeared if you sign out current account, you can re-login with the same account to see the notes

29 ways to take control of your social media Be more secure Make your password more secure by enabling "2-factor authentication", which basically means that you need your password plus a randomly generated code, usually texted to your mobile, to access your account. Go to the downward arrow on the top right of the screen -> Settings -> Security -> 'Login Approvals'. Sign out of Facebook remotely Girls (Who Code) Rule The World In a conference room on the ninth floor of the futuristic-looking IAC building on Manhattan's far West Side, a hive of teenage girls were buzzing in conversation recently. But they weren't talking about fashion or Justin Bieber. Instead, if you listen in, you'd overhear snippets like this: "My interest is robotics--I'm curious how a stoplight or an ATM works," said Martha Ghose, a Bangladeshi girl from Manhattan, or, "I want to create new medical devices," said Sondos Alnajjar from Jordan. These are Girls Who Code and their newest friends, the TechGirls. Girls Who Code is an eight-week summer enrichment and mentoring program for teenage girls interested in web design, robotics, and mobile development. The program was started in New York City and is happening in six cities this summer.

Help EFF Test Privacy Badger, Our New Tool to Stop Creepy Online Tracking EFF is launching a new extension for Firefox and Chrome called Privacy Badger. Privacy Badger automatically detects and blocks spying ads around the Web, and the invisible trackers that feed information to them. You can try it out today: Privacy Badger is EFF's answer to intrusive and objectionable practices in the online advertising industry, and many advertisers' outright refusal to meaningfully honor Do Not Track requests.

Minimize request overhead - Make the Web Faster Every time a client sends an HTTP request, it has to send all associated cookies that have been set for that domain and path along with it. Most users have asymmetric Internet connections: upload-to-download bandwidth ratios are commonly in the range of 1:4 to 1:20. This means that a 500-byte HTTP header request could take the equivalent time to upload as 10 KB of HTTP response data takes to download. Introducing Blue Pill All the current rootkits and backdoors, which I am aware of, are based on a concept. For example: FU was based on an idea of unlinking EPROCESS blocks from the kernel list of active processes, Shadow Walker was based on a concept of hooking the page fault handler and marking some pages as invalid, deepdoor on changing some fields in NDIS data structure, etc... Once you know the concept you can (at least theoretically) detect the given rootkit. Now, imagine a malware (e.g. a network backdoor, keylogger, etc...) whose capabilities to remain undetectable do not rely on obscurity of the concept. Malware, which could not be detected even though its algorithm (concept) is publicly known.

Does Pixel Size Matter by Roger N. Clark All images, text and data on this site are copyrighted. A Beginner’s Guide to Big O Notation « Rob Bell Big O notation is used in Computer Science to describe the performance or complexity of an algorithm. Big O specifically describes the worst-case scenario, and can be used to describe the execution time required or the space used (e.g. in memory or on disk) by an algorithm. Anyone who’s read Programming Pearls or any other Computer Science books and doesn’t have a grounding in Mathematics will have hit a wall when they reached chapters that mention O(N log N) or other seemingly crazy syntax. Hopefully this article will help you gain an understanding of the basics of Big O and Logarithms. As a programmer first and a mathematician second (or maybe third or fourth) I found the best way to understand Big O thoroughly was to produce some examples in code.

Security Group Claims to Have Subverted Google Chrome’s Sandbox A French security research firm boasted today that it has discovered a two-step process for defeating Google Chrome‘s sandbox, the security technology designed to protect the browser from being compromised by previously unknown security flaws. Experts say the discovery, if true, marks the first time hackers have figured out a way around the vaunted security layer, and almost certainly will encourage attackers to devise similar methods of subverting this technology in Chrome and other widely used software. In an advisory released today, VUPEN Security said: “We are (un)happy to announce that we have official Pwnd Google Chrome and its sandbox.” The post includes a video showing the exploitation of what VUPEN claims is a previously undocumented security hole in Chrome v.11.0.696.65 on Microsoft Windows 7 SP1 (x64). Google spokesman Jay Nancarrow said the company was unable to verify VUPEN’s claims, because VUPEN hadn’t shared any information about their findings.