The Only Earth We Have 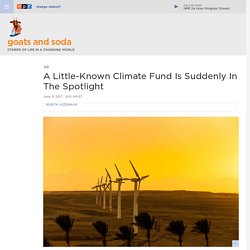 Helping developing countries harness energy from the wind is one of the Green Climate Fund's goals. Periglaciation. Create, Discover and Share on Gfycat. Americans own 640m acres of national land – if you can keep it. Acidified ocean water found along US West Coast. San Francisco: A study of the California current system has found highly acidified water along the US West Coast. 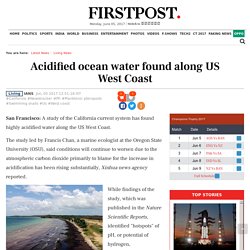 The study led by Francis Chan, a marine ecologist at the Oregon State University (OSU), said conditions will continue to worsen due to the atmospheric carbon dioxide primarily to blame for the increase in acidification has been rising substantially, Xinhua news agency reported. Representational image. AP While findings of the study, which was published in the Nature Scientific Reports, identified "hotspots" of pH, or potential of hydrogen, measurements as low as any oceanic surface waters in the world, there were "refuges" of more moderate pH environments that could become havens for some marine organisms to escape more highly acidified waters. Barrier reef suffers huge coral loss. Image copyright ARC Centre Australia's Great Barrier Reef lost nearly a third of its corals in the past year, officials have said. 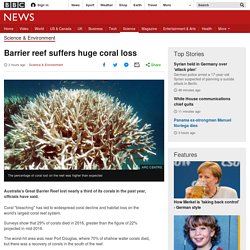 Coral "bleaching" has led to widespread coral decline and habitat loss on the world's largest coral reef system. Surveys show that 29% of corals died in 2016, greater than the figure of 22% projected in mid-2016. The worst-hit area was near Port Douglas, where 70% of shallow water corals died, but there was a recovery of corals in the south of the reef. The latest results come from surveys carried out by the Marine Park Authority, Queensland Parks and Wildlife Service, Australian Institute of Marine Science and the ARC Centre of Excellence for Coral Reef Studies. Migratory birds bumped off schedule as climate change shifts spring. GAINESVILLE, Fla. --- New research shows climate change is altering the delicate seasonal clock that North American migratory songbirds rely on to successfully mate and raise healthy offspring, setting in motion a domino effect that could threaten the survival of many familiar backyard bird species. 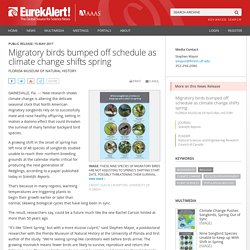 A growing shift in the onset of spring has left nine of 48 species of songbirds studied unable to reach their northern breeding grounds at the calendar marks critical for producing the next generation of fledglings, according to a paper published today in Scientific Reports. That's because in many regions, warming temperatures are triggering plants to begin their growth earlier or later than normal, skewing biological cycles that have long been in sync. The result, researchers say, could be a future much like the one Rachel Carson hinted at more than 50 years ago. Untitled. (CN) – Climate change is turning the white, frozen tundra of Antarctica a bit greener. 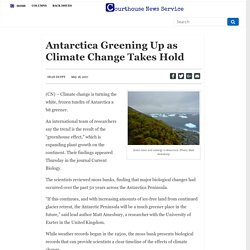 An international team of researchers say the trend is the result of the “greenhouse effect,” which is expanding plant growth on the continent. Their findings appeared Thursday in the journal Current Biology. The scientists reviewed moss banks, finding that major biological changes had occurred over the past 50 years across the Antarctica Peninsula. “If this continues, and with increasing amounts of ice-free land from continued glacier retreat, the Antarctic Peninsula will be a much greener place in the future,” said lead author Matt Amesbury, a researcher with the University of Exeter in the United Kingdom. Explorers See Greenland's Glaciers Like Never Before. Puerto Rico Tap Water Violates Safety Standards, Environmental Group Says. An environmental group finds a high rate of water quality violations in Puerto Rico and calls on officials on the island and in Washington to invest in safety improvements. 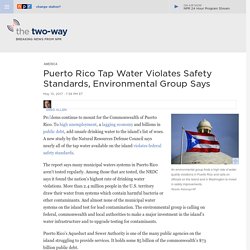 Ricardo Arduengo/AP hide caption toggle caption Ricardo Arduengo/AP An environmental group finds a high rate of water quality violations in Puerto Rico and calls on officials on the island and in Washington to invest in safety improvements. Problems continue to mount for the Commonwealth of Puerto Rico. The report says many municipal waters systems in Puerto Rico aren't tested regularly. This Graphic Puts Global Warming in Full Perspective. To say the world is having a streak like no other is an understatement. 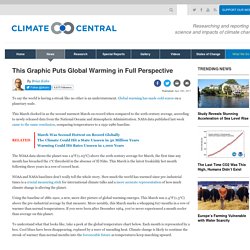 Global warming has made cold scarce on a planetary scale. This March clocked in as the second warmest March on record when compared to the 20th century average, according to newly released data from the National Oceanic and Atmospheric Administration. The World's Most Polluted River Revealed in Photos. An image of a woman walking on water might inspire awe under normal circumstances, but in this case it arouses something that feels more like horror. 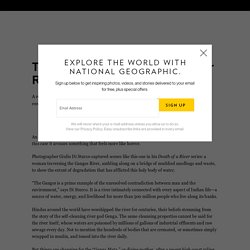 Photographer Giulio Di Sturco captured scenes like this one in his Death of a River series: a woman traversing the Ganges River, ambling along on a bridge of muddied sandbags and waste, to show the extent of degradation that has afflicted this holy body of water. “The Ganges is a prime example of the unresolved contradiction between man and the environment,” says Di Sturco. Escaped Pet Birds Are Teaching Wild Birds to Speak English : TreeHugger. Photo: enlewof / cc Across parts of Australia, reports have been pouring in of strange voices chattering high in the treetops -- mysterious, non-sensical conversations in English. 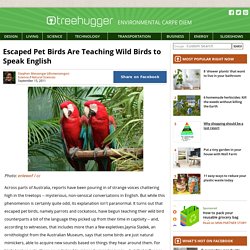 But while this phenomenon is certainly quite odd, its explanation isn't paranormal. It turns out that escaped pet birds, namely parrots and cockatoos, have begun teaching their wild bird counterparts a bit of the language they picked up from their time in captivity -- and, according to witnesses, that includes more than a few expletives.Jaynia Sladek, an ornithologist from the Australian Museum, says that some birds are just natural mimickers, able to acquire new sounds based on things they hear around them. Retreating Yukon glacier caused a river to disappear. Environment | News releases | Research | Science April 17, 2017. 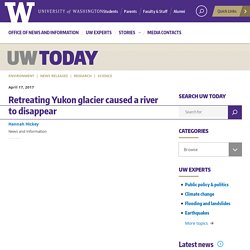 How many people are at risk of dying from starvation? Rep. Joseph Crowley, D-N.Y., joined members of Congress on Twitter April 7 to raise awareness for food issues using the hashtag #FightFamine. "More than 20 million people are at risk of dying from starvation within 6 months in 4 nations," he wrote. Is that true? The tweet is based on a projection from the United Nations. The U.N.’s head of emergency relief Stephen O’Brien provided the 20 million persons estimate to the U.N. "Without collective and coordinated global efforts, people will simply starve to death," O’Brien told council members.

To be clear, the number of people today who literally would have nothing to eat if it weren’t for international aid is less than 20 million. Worrisome signs for Greenland ice. As humans put more heat-trapping gases into the atmosphere, like carbon dioxide, ice around the planet melts. This melting can be a problem, particularly if the melting ice starts its life on land. That’s because the melt water flows into the oceans, contributing to rising sea levels. Right now there are three main reasons that sea levels are rising. The ecological disaster that is Trump’s border wall: a visual guide. Michigan's Tart Cherry Orchards Struggle To Cope With Climate Change. A tart cherry orchard in Michigan. Warmer days in early spring and erratic spring weather have hurt yields in recent years. Still, cherry growers are reluctant discuss the role of climate change.

Peter Payette/Interlochen Public Radio hide caption toggle caption. Drought’s over; climate change isn't. Gov. Jerry Brown made official on Friday what anyone who happened to be looking out a window at yet another soggy Sacramento morning may have suspected: The California drought is over. “But the next drought could be around the corner,” Brown cautioned in a statement accompanying his long-awaited executive order. “Conservation must remain a way of life.” Uk.businessinsider. Uk.businessinsider. Rick Santorum garbles climate change comments by Obama's EPA chief. Farms could slash pesticide use without losses, research reveals. Virtually all farms could significantly cut their pesticide use while still producing as much food, according to a major new study.

The elephant in the bloom: Japan’s cherry blossoms are emerging increasingly early. HANAMI, the Japanese custom of contemplating the impermanence of life by gazing at the fleeting beauty of blossoming flowers, goes back a long way. Lake Nyos disaster - Wikipedia. Lake Nyos as it appeared eight days after the eruption. I am an Arctic researcher. Donald Trump is deleting my citations. How climate change may drive extreme weather. —Whether a specific extreme weather event can be linked to climate change rarely gets a straightforward answer from climate scientists or meteorologists.

Types of Wind Turbines Used Today. Capturing the earth’s natural energy through wind was once an abstract idea. Eventually, however, engineers were able to focus the idea and put it into action through innovative technology. Throughout the development of wind turbines, many prototypes were created, and many of the first ones designed are still used today, just with more modern engineering. UN experts denounce 'myth' pesticides are necessary to feed the world. The idea that pesticides are essential to feed a fast-growing global population is a myth, according to UN food and pollution experts.

A new report, being presented to the UN human rights council on Wednesday, is severely critical of the global corporations that manufacture pesticides, accusing them of the “systematic denial of harms”, “aggressive, unethical marketing tactics” and heavy lobbying of governments which has “obstructed reforms and paralysed global pesticide restrictions”. The report says pesticides have “catastrophic impacts on the environment, human health and society as a whole”, including an estimated 200,000 deaths a year from acute poisoning. Its authors said: “It is time to create a global process to transition toward safer and healthier food and agricultural production.”

Siberia's 'doorway to the underworld' is getting so big it's uncovering ancient forests. Photos Reveal How Climate Change Affects the High Andes. Highest Recorded Temperatures In Antarctica Announced And They May Surprise You. Photographer Builds A 'Photo Ark' For 6,500 Animal Species And Counting. Environmentalists, Remember this Date: Nov. 6, 2018. Nature's Ready For Her Close-Up: 'Planet Earth II' Returns In Ultra High-Def.

Insects are awesome! Scientists have just detected a major change to the Earth’s oceans linked to a warming climate. Strange Fluctuations in the Magnetic Field Might Signal an Upcoming Pole Reversal. Radiation Dose Chart. Global oil supply - 2 clicks. Yes, Organic Farming Will Kill Us All – NewCo Shift. New Federal Policy Advances Nature-Based Protections for Property and Habitat. A Big Fish Sells For Over Half A Million — But Other Big Questions Persist. Mongolia (Documentary) I Have Seen the Earth Change. The Arctic just got its 2016 climate 'report card'—and it's flunking. Quitting UN climate change body could be Trump's quickest exit from Paris deal. Ross Sea Designated as World’s Largest Marine Protected Area. As Drought Wipes Out Western Forests, How Do Sequoias Survive? Environment. Deniers club: Meet the people clouding the climate change debate. 92 Percent Of The World's Population Breathes Substandard Air, WHO Says.

How The Oil And Gas Industry Awakened Oklahoma’s Sleeping Fault Lines. The longest floating structure in history is about to hit the ocean to fix a big problem. Senators Explain How Fossil Fuel Groups Use Media To Spread Denial And Thwart Climate Action. 2016 Is Going to Be the Hottest Year Ever (According to NASA, NOAA, & Pretty Much Everyone) Coral close-ups. HOW TO LET GO OF THE WORLD AND LOVE ALL THE THINGS CLIMATE CAN'T CHANGE trailer.

This-is-how-super-smart-octopuses-are. Water: Infographic. Monsanto on Trial for Crimes against Humanity and Nature. Can Sound Reduce Pesticide Use? What Humans Are Really Doing to Our Planet, in 19 Jaw-Dropping Images. Peak Foliage Season and The Best Views for Each Region. Make A Bee Waterer And Help Hydrate Our Pollinators. 5-reasons-to-rethink-getting-rid-of-spiders-from-your-home. Scientists create the first digital 'tree of life'

5 Animals that are at Risk of Extinction Because of Climate Change that Aren't Polar Bears. Recession not fracking responsible for drop in US emissions. Geology.com: News and Information for Geology & Earth Science. How Our Vegetables Became Less Nutritious than Our Parents' Encyclopedia of Earth. Strong Women, Wild Horses. 25 Most Extreme Climates on Earth. Nature Is Speaking – Julia Roberts is Mother Nature. The 25 Biggest Turning Points in Earth's History. PlanetQuest Historic Timeline. Flowers.