Can Colleges Use Data to Fix What Ails the Lecture? Ann Arbor, Mich. 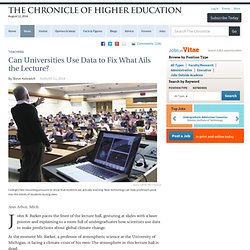 John R. Barker paces the front of the lecture hall, gesturing at slides with a laser pointer and explaining to a room full of undergraduates how scientists use data to make predictions about global climate change. At the moment Mr. Barker, a professor of atmospheric science at the University of Michigan, is facing a climate crisis of his own: The atmosphere in this lecture hall is dead.

Early success for Colorado's broad set of remedial reforms @insidehighered. Colorado’s public colleges are taking on the problem of low success rates in remedial education from multiple angles, with encouragement from state government. 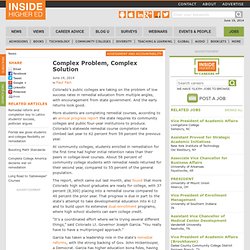 And the early returns look good. More students are completing remedial courses, according to an annual progress report the state requires its community colleges and public four-year institutions to produce. Colorado’s statewide remedial course completion rate climbed last year to 62 percent from 59 percent the previous year. At community colleges, students enrolled in remediation for the first time had higher initial retention rates than their peers in college-level courses.

About 58 percent of community college students with remedial needs returned for their second year, compared to 55 percent of the general population. STEM students fare better when professors don't just lecture, study finds @insidehighered. Scott Freeman and the other scholars behind a new study comparing the efficacy of lectures with more "active" forms of instruction in the science classroom are not aiming low in describing the significance of their findings. 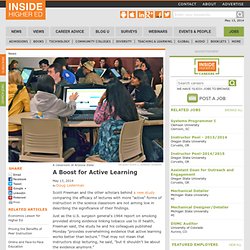 Ready or Not, Change is Coming. Of all the systemic challenges facing higher education today, one has not received the attention it deserves: The sweeping transformation of the student markets we serve. 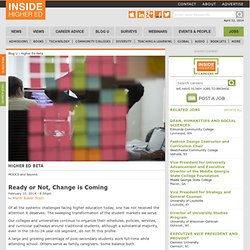 Our colleges and universities continue to organize their schedules, policies, services, and curricular pathways around traditional students, although a substantial majority, even in the 18-to-24 year old segment, do not fit this profile. A large and growing percentage of post-secondary students work full-time while attending school. Others serve as family caregivers. Some balance both. All students, whatever their circumstances, must vie for future employment trajectories in an ever-shifting, highly competitive global knowledge economy, where the appeal of many current degrees is tenuous. 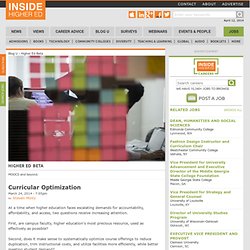 First, are campus faculty, higher education’s most precious resource, used as effectively as possible? Second, does it make sense to systematically optimize course offerings to reduce duplication, trim instructional costs, and utilize facilities more efficiently, while better meeting student demand? To even ask such questions raises the specter of expanded class sizes and restrictions on faculty’s ability to teach what and when they wish. But before giving into the fear that curricular optimization is essentially a matter of curbing costs and curtailing faculty autonomy, we might explore some of the gains that might result. Or we might explore whether enrollment in the “lesser taught” foreign languages could expand by offering courses in a synchronous online format to students at institutions that don’t offer such classes.

Association wants to create portable, competency-based general education framework. WASHINGTON -- The academy’s primary liberal education group is working to redesign general education pathways, which it says are becoming obsolete and need to be better grounded in learning outcomes, or competencies. 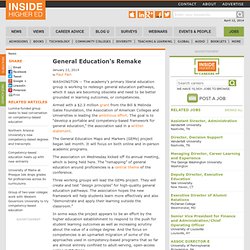 Armed with a $2.3 million grant from the Bill & Melinda Gates Foundation, the Association of American Colleges and Universities is leading the ambitious effort. The goal is to “develop a portable and competency-based framework for general education,” the association said in a written statement. The General Education Maps and Markers (GEMs) project began last month.

It will focus on both online and in-person academic programs.

Moocs. What Non-Profit Universities Can Learn from the For-Profits. Four Emergent Higher Education Models. The model that dominates non-profit higher education today is under severe stress, particularly at the less-selective institutions that serve the bulk of American students. 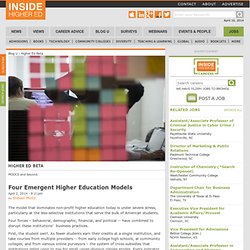 Four forces – behavioral, demographic, financial, and political -- have combined to disrupt these institutions’ business practices. 7 EdTech Assumptions. Our IHE community may disagree on many things, but the one thing we seem to agree on is the wisdom of our own thinking. 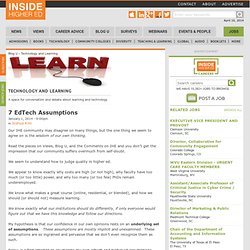 Read the pieces on Views, Blog U, and the Comments on IHE and you don’t get the impression that our community suffers overmuch from self-doubt. We seem to understand how to judge quality in higher ed. Flipping the classroom isn't the answer. 4 Ways We Will Support 21st Century Learning. Steven Mintz’s article Five Ways that 21st and 20th Century Learning Will Differ does a beautiful job of laying out how "teaching and learning in the early 21st century differ from its 20th century”. 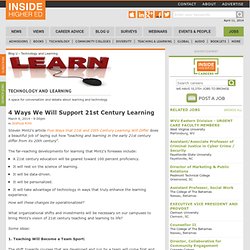 The far-reaching developments for learning that Mintz’s foresees include: A 21st century education will be geared toward 100 percent proficiency.