The first 'plus size' male models - Life Matters. Ashley Graham: The size 14 model calling for an end to 'plus size' labels. This year has been an exciting one so far for the models storming to the forefront of major fashion campaigns who challenge beliefs that only slim bodies are healthy. 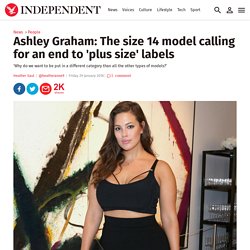 Days after Barbie Ferreira’s un-retouched advert for American Eagle Outfitters was unveiled, Ashley Graham has been announced as the face of fitness brand Addition Elle’s spring 2016 activewear range. Who is she? Graham, 28, is a US size 14/UK size 16 model, designer and body positive activist. She is signed to IMG Models. She gave a TED Talk that went viral If you aren’t familiar with Graham's modelling campaigns, you may remember her from a talk she gave in 2016 titled, “Plus Size? In it, Graham described her experiences within the fashion industry over the last 15 years and shared the empowering sentences she tells herself while looking in the mirror each morning.

“You are bold, you are brilliant, and you are beautiful. She is more than a model Her body positivity campaign continues to inspire others. Tess Holliday: Meet the world's biggest plus-sized super model leading the body positivity movement. Updated Media player: "Space" to play, "M" to mute, "left" and "right" to seek. 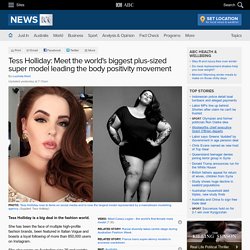 Video: Meet Casey Legler - the world's first female male model (7.30) Tess Holliday is a big deal in the fashion world. She has been the face of multiple high-profile fashion brands, been featured in Italian Vogue and boasts a loyal following of more than 850,000 users on Instagram. She also wears an Australian size 26 and weighs over 110 kilograms.

The largest model to be signed to a mainstream modelling agency, Milk Model Management, Holliday is the face of a new wave of women eschewing the traditional rail-thin model mould and embracing their bodies the way they are. Los Angeles-based Holliday describes herself as an activist, aiming to change the way the fashion industry makes women feel about themselves. "I started my body positive movement Eff Your Beauty Standards as my 'Eff You' to the 'rules' of what plus women are told we should and shouldn't wear. " Super model finds stardom, and love, online. Why is the hourglass figure the only version of plus size that we see? Photo: via Vogue Last week, Vogue made headlines for publishing an online editorial dedicated to curvy women dressed in plus-size lingerie. 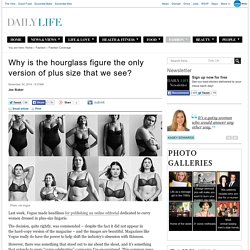 The decision, quite rightly, was commended – despite the fact it did not appear in the hard-copy version of the magazine – and the images are beautiful. Magazines like Vogue really do have the power to help shift the industry’s obsession with thinness. However, there was something that stood out to me about the shoot, and it’s something that extends to every “curve celebrating” campaign I’ve encountered. This common issue, often leaves me asking: why do we only see hourglass figures in our commercial exposure to plus-size bodies? I'm not sure if you have noticed, but ever since magazines and fashion brands began to include bigger models in their shoots and campaigns, they've only come in one shape: the sort that has a waistline considerably smaller than their bust and hips.

Advertisement And she is right to be sceptical. Paris hosts first ever Pulp Fashion Week for plus size women. Models present creations by "Femmes fabuleuses" during the first Pulp fashion week. 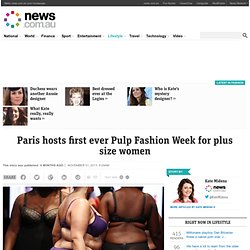 Source: AFP A model presents a creation by "La belle affranchie" during the first Pulp fashion week. Source: AFP PARIS has hosted its first ever fashion week for plus size women. The event - dubbed Pulp Fashion Week because pulp means 'luscious fruit' in French - was organised by Paris-based fashion group Histoire de Courbes, who are known for their celebration of larger women.

Showcasing labels like Maryse Richardson and Tika Soomak and plus-size ranges from chain stores like Forever 21 and Asos Curve, everything seen on the runway was tailored specifically to bigger women. With plus size model Robyn Lawley back in the news this week for speaking out against the thigh gap trend, this version of Paris Fashion Week is not only timely, but topical. Lawley dubbed the thigh gap trend, which sees women straining to achieve a box gap between the tops of their legs, as "unhealthy" and an "added burden".