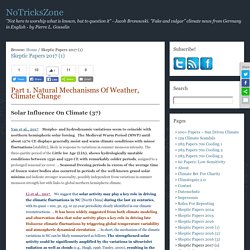 Quality Control Sorely Needed In Climate Science: Half Of Peer-Reviewed Results Non-Replicable, Flawed. “A number of biases internal and external to the scientific community contribute to perpetuating the perception of ocean calamities in the absence of robust evidence. 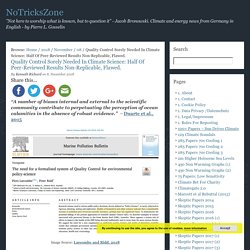 . ” – Duarte et al., 2015 Image Source: Larcombe and Ridd, 2018 Within a matter of days after the press release for a newly published Nature paper spewed the usual it’s-worse-than-we-thought headlines throughout the alarmosphere (Washington Post, BBC, New York Times), the paper’s results were assessed to have “major problems” by an author of multiple CO2 climate sensitivity papers (Lewis and Curry, 2015, 2018). A glaring miscalculation was quickly spotted that changed not only the results, but consequently undermined the conclusion that estimates of climate sensitivity to doubled CO2 may be too low. And yet the paper was able to pass through peer review anyway. Dr. A few years ago Dr. A post-publication reviewer (statistician Dr. 70% of “hoax” papers can get published in peer-reviewed journals. 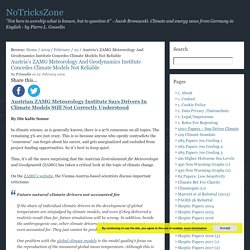 The remaining 3% are just crazy. This is so because anyone who openly contradicts the “consensus” can forget about his career, and gets marginalized and excluded from project funding opportunities. So it’s best to keep quiet. Potential Climatic Variables Page. Compiled by WUWT regular “Just The Facts” This list of Potential Climatic Variables was built with the help of a multitude of WUWT reader comments, beginning on this thread on January, 15th 2011, and growing on January 22nd, 2011, February 10th, 2011, February 28th, 2011, June 30th, 2011 and January 21st, 2012. 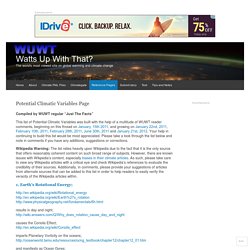 Your help in continuing to build this list would be most appreciated. Please take a look through the list below and note in comments if you have any additions, suggestions or corrections. Wikipedia Warning: The list relies heavily upon Wikipedia due to the fact that it is the only source that offers reasonably coherent content on such broad range of subjects. However, there are known issues with Wikpedia’s content, especially biases in their climate articles. Cause of Global Climate Change. Solar activity, ocean cycles, & water vapor explain 98% of climate change since 1900, NOT CO2! Thermalization and the complete dominance of water vapor in reverse-thermalization explain why atmospheric carbon dioxide (CO2) has no significant effect on climate. 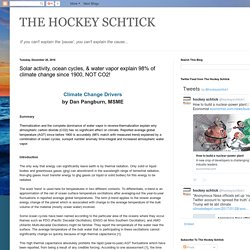 Reported average global temperature (AGT) since before 1900 is accurately (98% match with measured trend) explained by a combination of ocean cycles, sunspot number anomaly time-integral and increased atmospheric water vapor. Introduction The only way that energy can significantly leave earth is by thermal radiation. Only solid or liquid bodies and greenhouse gases (ghg) can absorb/emit in the wavelength range of terrestrial radiation. Non-ghg gases must transfer energy to ghg gases (or liquid or solid bodies) for this energy to be radiated.

Earth Climate Layers. Thanks to No Tricks Zone for posting work (here) by Dr. 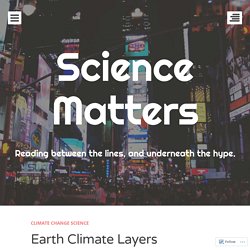 Dai Davies of Canberra. In his writing I found a fine summary paradigm leading to the image above. This post presents a scientifically rigorous view of our planetary climate system, starting with an airless rocky surface and then conceptually adding the dynamic elements in layers. The text below with my bolds and images comes from Energy and Atmosphere by Dr. The Atmospheric Lapse Rate and Molar Density. By Andy May, Michael Connolly and Ronan Connolly In this post, we will discuss the tropopause, atmospheric molar density and the lapse rate (the change in atmospheric temperature with altitude). 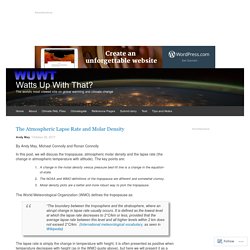 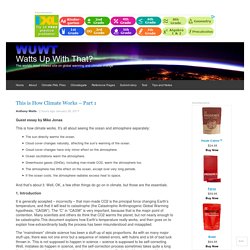 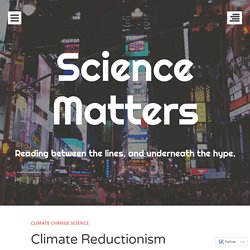 For example, a reductionist regarding mathematics might take any given mathematical theory to be reducible to logic or set theory. Or, a reductionist about biological entities like cells might take such entities to be reducible to collections of physico-chemical entities like atoms and molecules.Definition from The Internet Encyclopedia of Philosophy. Piers Corbyn: The Reality of Long Range Weather and Climate Forecasting. Symmetry and Balance.

Guest Post by Willis Eschenbach The CERES satellite dataset is a never-ending source of amazement and interest. 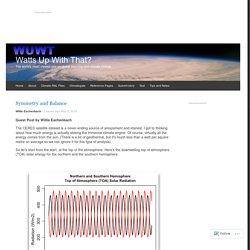 I got to thinking about how much energy is actually stoking the immense climate engine. Of course, virtually all the energy comes from the sun. (There is a bit of geothermal, but it’s much less than a watt per square metre on average so we can ignore it for this type of analysis). So let’s start from the start, at the top of the atmosphere.

Figure 1. However, we don’t get all of that energy. Figure 2. CRISES IN CLIMATOLOGY. Guest essay by Donald C. Morton Herzberg Program in Astronomy and Astrophysics, National Research Council of Canada The Report of the Intergovernmental Panel on Climate Change released in September 2013 continues the pattern of previous ones raising alarm about a warming earth due to anthropogenic greenhouse gases. This paper identifies six problems with this conclusion – the mismatch of the model predictions with the temperature observations, the assumption of positive feedback, possible solar effects, the use of a global temperature, chaos in climate, and the rejection of any skepticism.

Many climatologists have been telling us that the environment of the earth is in serious danger of overheating caused by the human generation of greenhouse gases since the Industrial Revolution. New Paper: Temperature Drives Downwelling Longwave Changes, Not The Other Way Around. By Kenneth Richard on 27. June 2019 The CO2 greenhouse effect presumably perturbs the Earth’s energy budget by driving trends in downwelling longwave radiation from the top of the atmosphere, which in turn drives changes in surface temperatures. Two scientists (Zeppetello and Battisti, 2019) have observed the opposite: perturbations in surface temperatures are what drive changes in downwelling longwave.

Consequently, they conclude downwelling longwave “cannot be considered an independent component of the surface energy budget.”