Sea Ice Yet To Form Off Siberia, Worrying Scientists. Covering Climate Now The Laptev Sea and East Siberian Sea are, at this point, failing to re-freeze as rapidly as in the past. 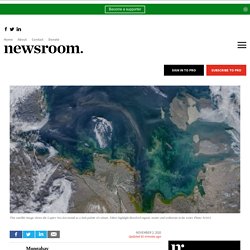 Scientists are worried the northern polar region may be entering a new climate regime. Sharon Guynup reports At this time of year, in Russia’s far north Laptev Sea, the sun hovers near the horizon during the day, generating little warmth, as the region heads towards months of polar night. By late September or early October, the sea’s shallow waters should be a vast, frozen expanse. But not this year. “In one sense, it’s shocking, but on the other hand, it’s not surprising,” said Walt Meier, a research scientist at the University of Colorado Boulder’s National Snow and Ice Data Center (NSIDC).

What a 100-degree day in Siberia, above the Arctic Circle, really means. An extended heat wave that has been baking the Russian Arctic for months drove the temperature in Verkhoyansk, Russia—north of the Arctic Circle—to 100.4°F on June 20, the official first day of summer in the Northern Hemisphere. This record high temperature is a signal of a rapidly and continually warming planet, and a preview of how Arctic warming will continue in an increasingly hot future, scientists say. “For a long time, we’ve been saying we’re going to get more extremes like strong heat waves,” says Ruth Mottram, a climate scientist at the Danish Meteorological Institute.

“It’s a little like the projections are coming true, and sooner than we might have thought.” Saturday’s record wasn’t just a quick spike before a return to more normal summer temperatures for the Russian Arctic: The heat wave behind it is projected to continue for at least another week. It was the hottest temperature ever recorded in the town, where records have been kept since 1885. They Will Inherit the Earth. At her home in Avondale, Mel Brown is juggling work, Lily and an imminent house move. 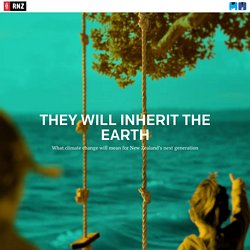 If it’s stressful, it’s nothing compared to what she fears Lily may face as an adult. She wonders what her quality - and length - of life will be. “What happens when the planet heats up to the point where it can't sustain life? Is that within her lifespan? If she has children, what are they going to be facing? Talk to Petra Pearce, a climate scientist for NIWA, and Brown’s concerns seem entirely valid. Iceland holds funeral for first glacier lost to climate change. Iceland has marked its first-ever loss of a glacier to climate change as scientists warn that hundreds of other ice sheets on the subarctic island risk the same fate. 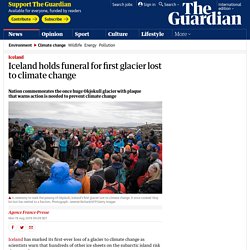 As the world recently marked the warmest July ever on record, a bronze plaque was mounted on a bare rock in a ceremony on the barren terrain once covered by the Okjökull glacier in western Iceland. Extreme climate change has reached the United States: Here are America’s fastest-warming places - Washington Post. As the oceans rise, the Pacific refuses to be left behind. To give the Pacific a fighting chance Australia and NZ need to take a stand, writes a Fijian litigator and activist. 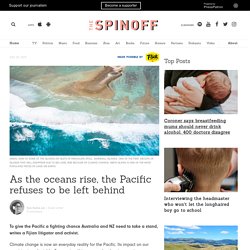 Climate change is now an everyday reality for the Pacific. Its impact on our countries is undeniable. To remain within our own borders in years to come, we need radical global and collective transitions. Yet even with the constant threat of climate change and the ongoing uncertainty over our communities’ futures, daily bread-and-butter developmental issues still pose significant barriers to our progress. A transition may hurtle us out of ‘developing’ or ‘least developed’ (LDC) status and firmly situate us as ‘developed’ countries, thereby further reducing our vulnerability to climate change.

Pacific won’t budge on climate change; neither will Australia. A showdown over climate policy is looking likely in Tuvalu when the region's leaders meet at the Pacific Islands Forum today, with Australia's climate policies to come under particular attack. 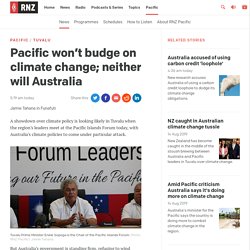 Tuvalu Prime Minister Enele Sopoga is the Chair of the Pacific Islands Forum. Photo: RNZ Pacific/ Jamie Tahana But Australia's government is standing firm, refusing to wind down its commitments to the coal industry, restart contributions to the Green Climate Fund, or do more to cut the country's greenhouse gas emissions - some of the highest per capita in the world. This sets the scene for what could be a tense standoff when the leaders of the forum's 18 countries and territories meet in a falekaupule at the northern end of the main atoll, Funafuti, today. The venue is tactical. "I think by coming to Tuvalu and seeing how extremely vulnerable … there will be realisation of the plights that people in Tuvalu face," said Prime Minister Enele Sopoga, who is also the chair of this year's forum.

Climate change: How the jet stream is changing your weather. Farmers among biggest victims of climate change. Environment Food waste, soil erosion, deforestation and, yes, methane from cows feature in a major IPCC report on land. 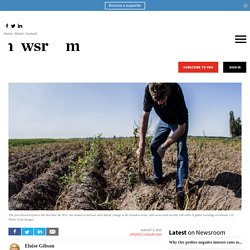 Farmers emerge not only as contributors to climate change, but some of its most significant victims. To avert climate breakdown we need to reforest an area the size of the US. Restoring the world’s forests on an unprecedented scale is “the best climate change solution available”, according to a new study. 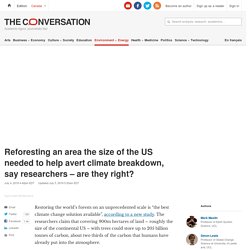 The researchers claim that covering 900m hectares of land – roughly the size of the continental US – with trees could store up to 205 billion tonnes of carbon, about two thirds of the carbon that humans have already put into the atmosphere. While the best solution to climate change remains leaving fossil fuels in the ground, we will still need to suck carbon dioxide (CO₂) out of the atmosphere this century if we are to keep global warming below 1.5˚C. So the idea of reforesting much of the world isn’t as far-fetched as it sounds. Since the dawn of agriculture, humans have cut down three trillion trees – about half the trees on Earth.

Already 43 countries have pledged to restore 292m hectares of degraded land to forest worldwide. We must change food production to save the world, says leaked report. Attempts to solve the climate crisis by cutting carbon emissions from only cars, factories and power plants are doomed to failure, scientists will warn this week. 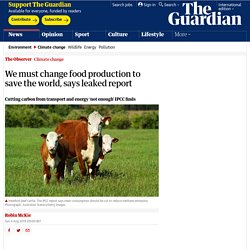 A leaked draft of a report on climate change and land use, which is now being debated in Geneva by the Intergovernmental Panel on Climate Change (IPCC), states that it will be impossible to keep global temperatures at safe levels unless there is also a transformation in the way the world produces food and manages land. Humans now exploit 72% of the planet’s ice-free surface to feed, clothe and support Earth’s growing population, the report warns. At the same time, agriculture, forestry and other land use produces almost a quarter of greenhouse gas emissions. The land below us is withering away: Food, water, and lands at risk due to climate change, says IPCC report. In Motunui, north of Taranaki, the sea waves lap at the coast, eating into the dirt. 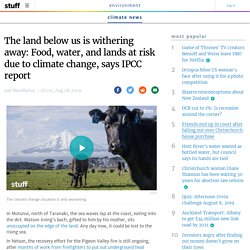 Watson Irving's bach, gifted to him by his mother, sits unoccupied on the edge of the land. Any day now, it could be lost to the rising sea. In Nelson, the recovery effort for the Pigeon Valley fire is still ongoing, after months of work from firefighters to put out underground heat spots. Forestry blocks, animals, and one home were lost. In Westport, volunteers bus in and out in the dozens to help with the cleanup effort after flooding this year opened up a decades-old landfill, spilling rubbish into the pristine sea. Canada’s forests haven’t absorbed more carbon than they’ve released since 2001. Ted Hogg’s research usually takes him much deeper in Canada’s boreal forest — but on a chilly day strolling through Edmonton’s river valley, it doesn’t take long before he sees examples of the damage he’s looking for. 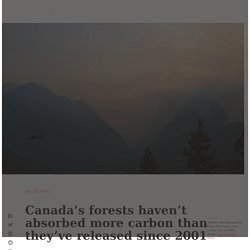 Pointing to several of the snow bearing trees, he indicates the deaths he’s already witnessing from climate change. “There’s a lot of trees dying. Different types of trees. Sun-warmed surface seawater drives fast melt in Ross Ice Shelf region. Research involving Kiwi scientists has shown surface seawater, warmed by the sun, is a key factor in why the base of part of the Ross Ice Shelf (RIS) in Antarctica has melted faster than average. The findings could have major implications for models trying to determine the effect global warming will have on ice in Antarctica, and on predictions of global sea level rise. "At the moment there's a whole bunch of modelling which is being done to try to understand what might happen in the future," Niwa principal scientist in marine physics Dr Mike Williams said.

"Some of the science we've done hasn't been incorporated into those kind of studies and models. That's what we're really interested in talking about," he said. Apocalypse now: Our bleak climate future. Quick! Save the Planet: We must confront climate change. EDITORIAL: Despair isn't the worst reaction to climate change. Complacency might be. Under an avalanche of foreboding news – sea level rises, melting ice sheets, accelerating species extinction, heatwaves, ocean acidification – despair comes naturally. Global Warming. Climate Change. Marine heatwaves to get stronger and more common. New international research shows marine heatwaves are becoming more common and likely to get much stronger. Marine heatwaves - like the one experienced in New Zealand last summer - are likely to become more frequent and hurt marine ecosystems. Photo: 123RF Marine heatwaves are smaller and more rapid changes in sea temperature that occur during hot weather.

New Zealand experienced one last summer. Cloud Loss Could Add 8 Degrees to Global Warming. The worst climate change denial myths, debunked by experts. Scientific evidence for climate change is "unequivocal", according to the Intergovernmental Panel on Climate Change (IPCC). Who are they? The IPCC's latest report, published in October 2018, had 91 authors and 133 contributing authors, over 6000 cited scientific references, and about 42,000 expert and government review comments. Beyond the IPCC, 97 percent of climate scientists agree climate-warming trends over the past century are very likely due to human activities, according to NASA. Most of the leading scientific organisations worldwide have issued public statements endorsing this position. But despite the weight of evidence, climate science denial still exists.

READ MORE: * Quick! The climate visualisations that leave no room for doubt or denial. Meat consumers could have 'immediate impact' on climate change by reducing intake by one meal a week - Shaw. It is not the Government's official stance, but Climate Minister James Shaw said carbon footprints could be reduced by people eating one less meat meal per week. Corin Dann with this extended interview with Climate Change Minister James Shaw Source: Q+A On TVNZ1's Q+A this morning, host Corin Dann asked if Mr Shaw agreed with an article from The Journal suggesting the "best thing consumers can do to curb climate change would be to stop eating meat and dairy".

Mr Shaw told Corin Dann that 95 per cent of New Zealanders consume meat, "and it is fairly obvious there is a lot of water, a lot of energy and a lot of land use that goes into protein production that way". "If somebody wanted to have an immediate impact, they could eat one less meat meal per week. " "We're not encouraging that as a government. It comes as the consultation process for the Zero Carbon Bill launches next week, with the goal being it could create a carbon neutral economy by 2050.

The Greenhouse Effect and Greenhouse Gasses. Have you ever been inside a greenhouse on a cold winter day? It might be cold outside, but inside the greenhouse lush green plants flourish in the warmth and sunshine. Greenhouses are made of glass and are designed to hold heat inside. Our planet's atmosphere also traps energy, sort of like a greenhouse. What's the Difference Between Weather and Climate?