Why this U.N. climate summit is especially important. Thousands of diplomats from around the world are gathering today in Lima, Peru, in the latest round of wrangling to hammer out a deal to address climate change. 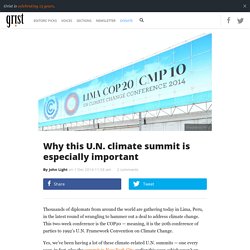 This two-week conference is the COP20 — meaning, it is the 20th conference of parties to 1992’s U.N. Framework Convention on Climate Change. Yes, we’ve been having a lot of these climate-related U.N. summits — one every year, in fact, plus the summit in New York City earlier this year, which wasn’t an official conference of parties. Australia hit by tropical cylone double whammy - environment - 23 February 2015. It was a shocking double blow. 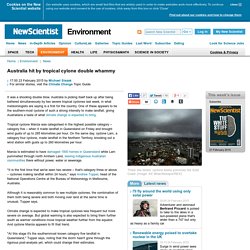 Aboriginal_climate. The climate in Aboriginal Australia - Yarralin Yarralin (Walangeri) is an aboriginal community 382 km southwest of Katherine in the Northern Territory, 16 km west of the Victoria River Downs cattle station on the banks of the Wickham River. 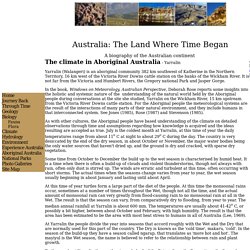 It is not far from the Victoria and Humbert Rivers, the Gregory national Park and Jasper Gorge. In the book, Windows on Meteorology, Australian Perspective, Deborah Rose reports some insights into the holistic and systemic nature of the understanding of the natural world held by the Aboriginal people during conversations at the site she studied, Yarralin on the Wickham River, 15 km upstream from the Victoria River Downs cattle station.

For the Aboriginal people the meteorological systems are the result of the interactions of many parts of their natural environment, and they include humans in that interconnected system. Australian climate, Australian weather - Aussie-Info.com. Australia is a continent that experiences a variety of climates due to its size. 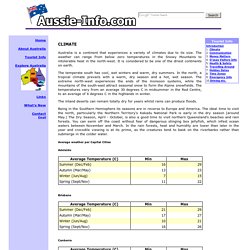 The weather can range from below zero temperatures in the Snowy Mountains to intolerable heat in the north-west. It is considered to be one of the driest continents on earth. The temperate south has cool, wet winters and warm, dry summers. In the north, a tropical climate prevails with a warm, dry season and a hot, wet season. The extreme north-west experiences the ends of the monsoon systems, while the mountains of the south-east attract seasonal snow to form the Alpine snowfields. The inland deserts can remain totally dry for years whilst rains can produce floods.

Capitalism vs. the Climate. Denialists are dead wrong about the science. 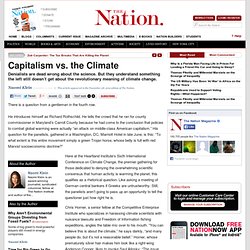 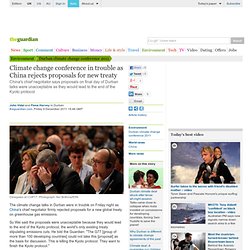 Photograph: Nic Bothma/EPA The climate change talks in Durban were in trouble on Friday night as China's chief negotiator firmly rejected proposals for a new global treaty on greenhouse gas emissions. 350.org. Global Climate Change: NASA&#039;s Eyes on the Earth. Science says: Cut that steak in half to keep the climate in check. Photo by Jack Lyons. 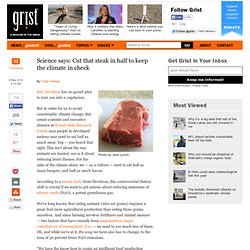 Eric Davidson has no grand plan to turn you into a vegetarian. But in order for us to avoid catastrophic climate change, this senior scientist and executive director at Woods Hole Research Center says people in developed nations may need to eat half as much meat. Yep — you heard that right. This isn’t about the way animals are treated, nor is it about reducing heart disease.

For the sake of the climate alone, we — as a culture — need to eat half as many burgers, and half as much bacon. According to a recent study from Davidson, this controversial dietary shift is crucial if we want to get serious about reducing emissions of nitrous oxide (N2O), a potent greenhouse gas. We’ve long known that eating animals (who eat grains) requires a great deal more agricultural production than eating those grains ourselves. Watch 62 Years of Global Warming in 13 Seconds. Don't Have Flash? 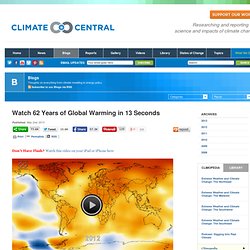 Watch this video on your iPad or iPhone here From our friends at NASA comes this amazing 13-second animation that depicts how temperatures around the globe have warmed since 1950. You’ll note an acceleration of the temperature trend in the late 1970s as greenhouse gas emissions from energy production increased worldwide and clean air laws reduced emissions of pollutants that had a cooling effect on the climate, and thus were masking some of the global warming signal. The data come from NASA's Goddard Institute for Space Studies in New York (GISS), which monitors global surface temperatures. 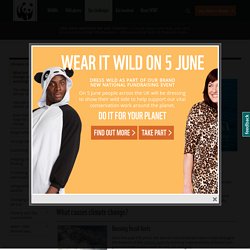 Global warming – doesn’t mean we’ll all just have warmer weather in future. As the planet heats, climate patterns change. It’ll mean more extreme and unpredictable weather across the world – many places will be hotter, some wetter, others drier. NASA Climate. Impacts of global warming - WWF-Australia. Our climate is determined by patterns of temperature, wind, atmospheric pressure, humidity and rain over a long period of time. 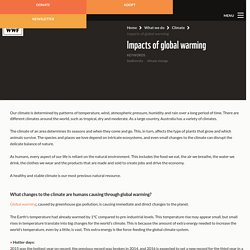 There are different climates around the world, such as tropical, dry and moderate. As a large country, Australia has a variety of climates. The climate of an area determines its seasons and when they come and go. Climate Change. Climate change is a change in worldwide climate patterns, like the weather. It is a very important topic in current events because the world is seeing a very large change in climate due to global warming. Useful words and phrases Here are some words and phrases you might come across when researching this topic. Climate: Climate refers to the normal weather patterns of a place, such as average temperature, rainfall, wind etc. Climate change: The change in the normal weather patterns, which can mean warming, cooling, or other changes.

The greenhouse gas emissions from human activities are driving climate change and continue to rise. They are now at their highest levels in history. Without action, the world’s average surface temperature is projected to rise over the 21st century and is likely to surpass 3 degrees Celsius this century—with some areas of the world expected to warm even more.

Affordable, scalable solutions are now available to enable countries to leapfrog to cleaner, more resilient economies. But climate change is a global challenge that does not respect national borders. Goal 13: Climate action. Bushfire Recovery: 09/02/2016, Behind the News. Over the summer holidays, bushfires struck many communities around Australia. For the kids that live in those areas, recovering has been a long process. 6 Worst Raging Fires and Explosive Volcanoes. (Part 3 in an Exclusive 4 Part WebEcoist Series on Natural Disasters) The blast of heat from a volcano can be fierce enough to cause damage thousands of miles away; the hungry flames of a fire can destroy whole forests. Bush Fire Bulletin 2015 Vol 37 No 3. Ash Wednesday 30th Anniversary. Fighting Fire Using Sound Waves. Every year fires cause devastation in people’s homes, workplaces and in the countryside.

Thousands of square miles of forests are destroyed, while people and animals lose their homes and their lives. It can be very difficult and incredibly expensive to put out fires and so we are constantly looking for cheaper and more efficient ways to do this. Drought and winter fires spark fears about summer bushfire season. Through Our Eyes - Using Fire To Care For Country with Roy Barker. Prescribed burning debate rages as Australia finds there's no time to burn going into peak fire season. Posted 13 Sep 2018, 1:27amThu 13 Sep 2018, 1:27am There is a lot more to prescribed burning, also known as controlled burning, than just lighting the match as a changing climate and environment poses new challenges for fire authorities. Deputy chief fire officer with Forest Fire Management (FFA) Victoria, Darrin McKenzie, said autumn burning this year was particularly challenging and the state only managed to achieve about 30 per cent of prescribed burning programs.

Indigenous rangers partner with Nitmiluk National Park rangers in national first for fire management - ABC Rural - ABC News. Indigenous rangers are collaborating with Northern Territory Parks and Wildlife rangers in Nitmiluk National Park to manage its savanna burning program, in an Australian-first agreement. Under the partnership the Jawoyn rangers will work with parks rangers to minimise damaging late dry-season wildfires across the park near Katherine. In pictures: Australia's drought seen from the air. Parts of eastern Australia are suffering their worst drought in living memory as a lack of rainfall in winter hits farms badly.

To put this into perspective, for each 1 degree of temperature increase, grain yields decline by about 5 per cent. Conversations with the Earth - Stories. The clearest proof we’ll ever get that our planet is falling apart. Every once in a while, a chart or statistic or image comes along that reminds us, all over again, why it is that this global warming thing is so terrifying. This week, it was those darn walruses, who — after a summer when Arctic sea ice was at its sixth-lowest level on record — mobbed an Alaska beach in the largest such haul-out ever observed there. Overview of Greenhouse Gases. Where Greenhouse Gases Come From - Energy Explained, Your Guide To Understanding Energy. 2018 Study Finds ‘Unsustainable’ Smartphone CO2 Emissions To Reach 125 Megatons Per Year By 2020. Carbon emissions 'postpone ice age'.