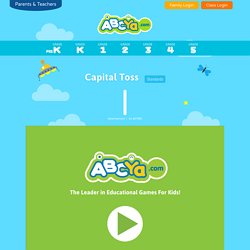 A Geography quiz for Key Stage 3. Quizzity - a geography game. WikiWhere. Fly Through A Colossal Cave: Son Doong in 360° By Jane J. 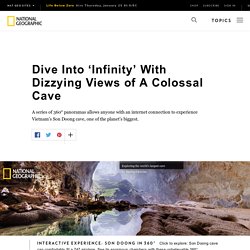 Lee Interactive and photographs by Martin Edström Son Doong is one of the world's largest caves, with enormous chambers that can comfortably fit a 747 airplane or an entire New York City block full of 40-story buildings. Its mammoth chambers extend so far that explorers have called Son Doong an "infinite cave. " And with an amazing new digital tour, you can plunge below ground to see it yourself without ever leaving the country. Pictures have offered stunning peeks into the cave, which is located in central Vietnam's Phong Nha-Ke Bang National Park, since explorers discovered it in 2009 with the help of a local guide.

Photojournalist Martin Edström hopes to bring the cave to as many people as possible. Digital "tourists" can mouse through 360° panoramic views of key sections of Son Doong on a smartphone, tablet, or desktop computer (see above). You've expressed reservations about inserting a cable car and other features for tourism in the cave. Everything was huge and majestic. World Geography Games - Let's play and learn about the world. 5 Fun Geography Games for Geography Awareness Week. On each of the previous three days I've shared some resources and ideas for Geography Awareness Week. 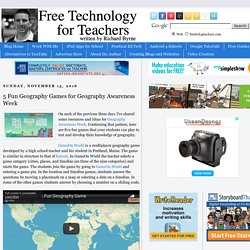 Continuing that pattern, here are five fun games that your students can play to test and develop their knowledge of geography. GameOn World is a multiplayer geography game developed by a high school teacher and his student in Portland, Maine. The game is similar in structure to that of Kahoot. In GameOn World the teacher selects a game category (cities, places, and timeline are three of the nine categories) and starts the game.

The students join the game by going to GameOn.World and entering a game pin. GameOn.World - Online Trivia Game. This Dynamic Earth. View of the planet Earth from the Apollo spacecraft. 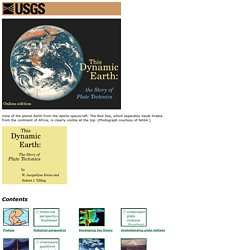 The Red Sea, which separates Saudi Arabia from the continent of Africa, is clearly visible at the top. (Photograph courtesy of NASA.) Ordering Instructions This book was originally published in paper form in February 1996 (design and coordination by Martha Kiger; illustrations and production by Jane Russell). It is for sale from: U.S. Or it can be ordered directly from the U.S. Mineralogy 4 Kids : Welcome. The Rock Cycle . Introduction. Britain from the Air - Free Outdoor Street Gallery. Geography Homework Help for Kids - Woodlands Geography. Geocaching - The Official Global GPS Cache Hunt Site.

Geography & Geology For Kids. GeoGuessr - Let's explore the world! Geo-Primary. Assessing Primary Geography Teacher assessment is a complex matter, but here are a few tools to help you with part of the process. 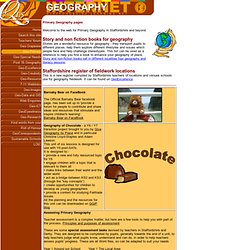 Principles and purposes of assessment These are some special assessment tasks devised by teachers in Staffordshire and Derby. They are designed to be completed by pupils, generally towards the end of a unit, to help teachers judge what pupils know, understand and can do, in order to help teachers assess pupils' progress. These are all Word files, so can be adapted to suit your needs Recording pupils' progress These examples of recording grids are useful to help you devise your own.

Working on your own moderating pupils' attainment can be very difficult. Crayon Rocks. We've had a very, very warm winter here in Michigan. 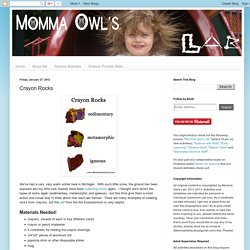 With such little snow, the ground has been exposed and my little rock hounds have been collecting rocks again. I thought we'd revisit the types of rocks again (sedimentary, metamorphic and igneous) - but this time give them a more active and visual way to think about how each are formed. There are many examples of creating rocks from crayons, but this pdf from the the Exploratorium is very helpful. The Secret - Planet Earth HD. Discovery Student Adventures. The Geography Zone. GeoGreeting! ProjectBritain.com - A resource of British Life and Culture in the UK by Woodlands Junior. World Wonders Project. Geography - Glossary. Geocaching - The Official Global GPS Cache Hunt Site. Geography - Primary Resources. Streetmap - Maps and directions for the whole of Great Britain. 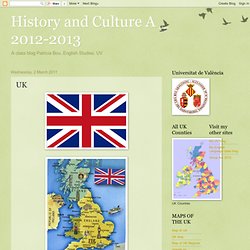 It spans an archipelago including Great Britain, the northeastern part of the island of Ireland, and many smaller islands.Northern Ireland is the only part of the UK with a land border with another sovereign state, sharing it with the Republic of Ireland Apart from this land border, the UK is surrounded by the Atlantic Sea, the North Sea, the English Channell, and the Irish Sea. The United Kingdom is a constitutional monarchy and unitary state. It is a country consisting of four countries: England, Northern Ireland, Scotland, and Wales.

It is governed by a parliamentary system with its seat of government in the capital city of London. Capital: LONDON Dependencies: The United Kingdom has sovereignty over seventeen territories which do not form part of the United Kingdom itself, 14 British Overseas Territories and three Crown Dependencies. Geograph British Isles - photograph every grid square!