Conlang Conworld Conscript, word symbols in Dscrip by dscript on deviantART. How to Write Gallifreyan by BlackHatGuy on deviantART. Résultats Google Recherche d'images correspondant à. Gallifreyan Mathematics Suggestion - On the Derivative Notation : gallifreyan. Circular Gallifreyan - Conlang. This project is completed.By all means, please contribute to the language's culture and/or history. 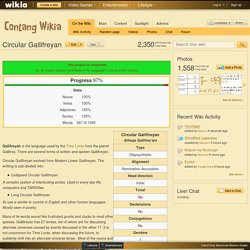 Gallifreyan is the language used by the Time Lords from the planet Gallifrey. There are several forms of written and spoken Gallifreyan. Circular Gallifreyan evolved from Modern Linear Gallifreyan. The writting is sub-divided into: Collapsed Circular Gallifreyan A complex system of interlocking circles. Long Circular Gallifreyan Its use is similar to cursive in English and other human languages. Many of its words sound like frustrated grunts and clucks to most other species. Gallifreyans only evolved a language when it became necessary to discuss concepts which could not be adequately expressed telepathically, such as quantum physics.

Phonology Edit Consonants Edit Vowels Alphabet There are no letters in Circular Gallifreyan. Time Lords do not disting consonants from vowels. This is the alphabet taught to the children of Gallifrey when they enter the Academy: Sentence Structure Words Order. Rikchik Language. The rikchiks speak in what would be called sign language by humans. 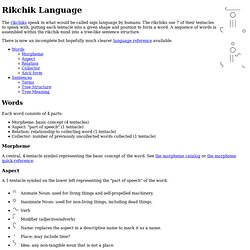 The rikchiks use 7 of their tentacles to speak with, putting each tentacle into a given shape and position to form a word. A sequence of words is assembled within the rikchik mind into a tree-like sentence structure. Roles and Relations. In natural languages, roles are usually represented by nouns, such as mother, brother, author, or driver, but in predicate calculus, they are often represented by dyadic relations, such as motherOf, brotherOf, authorOf, or driverOf. 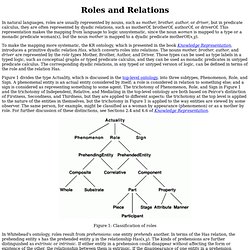 This representation makes the mapping from language to logic unsystematic, since the noun woman is mapped to a type or a monadic predicate woman(x), but the noun mother is mapped to a dyadic predicate motherOf(x,y). To make the mapping more systematic, the KR ontology, which is presented in the book Knowledge Representation, introduces a primitive dyadic relation Has, which converts roles into relations. The nouns mother, brother, author, and driver are represented by the role types Mother, Brother, Author, and Driver.

Those types can be used as type labels in a typed logic, such as conceptual graphs or typed predicate calculus, and they can be used as monadic predicates in untyped predicate calculus. Figure 1: Classification of roles Composite. Piece. Notes on a Visual Shorthand for Conceptual Graphs. Home | Blog | Writings | Interests | Philosophy | Sabbatical '95 | Burning Man '97 | Burning Man '99 | Burning Man '02 | PGP Key | Ex-WCG | Bevan | Auryn | Family | Arciem | Resume | Sciral | Most of the action on my site is now in my blog and my tumblelog. 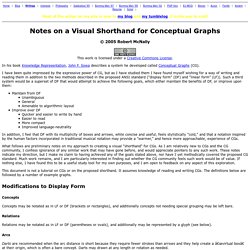 I invite you to visit! In his book Knowledge Representation, John F. Sowa describes a system he developed called Conceptual Graphs (CG). I have been quite impressed by the expressive power of CG, but as I have studied them I have found myself wishing for a way of writing and reading them in addition to the two methods described in the proposed ANSI standard ("display form" (DF) and "linear form" (LF)). Maintain from DF Unambiguous General Amenable to algorithmic layout Improve over DF Quicker and easier to write by hand Easier to read More compact Improved language-neutrality. A Picture of Language. Joe Mortis Draft is a series about the art and craft of writing. 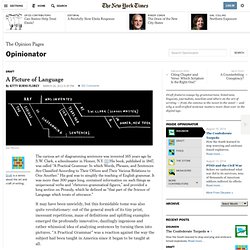 The curious art of diagramming sentences was invented 165 years ago by S.W. Writing System. This begins a tutorial on the Ouwi writing system. 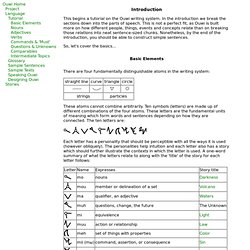 In the introduction we break the sections down into the parts of speech. Scripts and writing systems by Naeddyr on deviantART. Just My Flawed Logic. Conlang:NotSure - Conlang. Early Draft Edit. 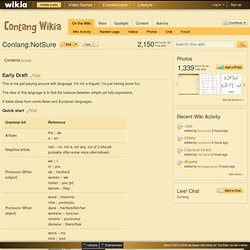 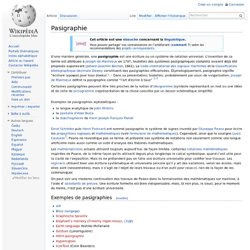 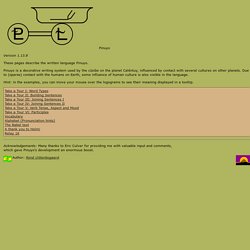 Pinuyo is a decorative writing system used by the cúsibe on the planet Caléntuy, influenced by contact with several cultures on other planets. Due to (sparse) contact with the humans on Earth, some influence of human culture is also visible in the language. Hint: in the examples, you can move your mouse over the logograms to see their meaning displayed in a tooltip. Diagramming Sentences. Sentence Types and Clause Configurations COMPOUND SENTENCE Boggs hit the ball well, but he ran to the wrong base. 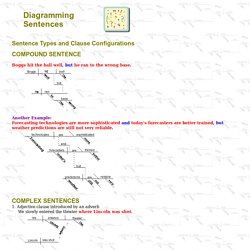 Another Example:Forecasting technologies are more sophisticated and today's forecasters are better trained, but weather predictions are still not very reliable. COMPLEX SENTENCES 1. Adjective clause introduced by an adverb We slowly entered the theater where Lincoln was shot. OPTIONAL METHOD: We slowly entered the theater where Lincoln was shot. 2. Adjective clause introduced by a relative pronoun acting as subject That woman who just left the room will probably be the next president. Begriffsschrift (Conceptual Notation) Begriffsschrift (Conceptual Notation) Preface In the preface, Frege exposes his firm conviction that the issue of truth lies on logic, but logic in itself has nothing to do with anything in particular.

Existential Graphs. Conceptual Graph Examples. Conceptual graphs are formally defined in an abstract syntax that is independent of any notation, but the formalism can be represented in several different concrete notations. This document illustrates CGs by means of examples represented in the graphical display form (DF), the formally defined conceptual graph interchange form (CGIF), and the compact, but readable linear form (LF).

Every CG is represented in each of these three forms and is translated to a logically equivalent representation in predicate calculus and in the Knowledge Interchange Format (KIF) . For the formal definition of conceptual graphs and the various notations for representing them, see the draft proposed American National Standard . For examples of an English-like notation for representing logic, see the web page on controlled English . List of Examples.