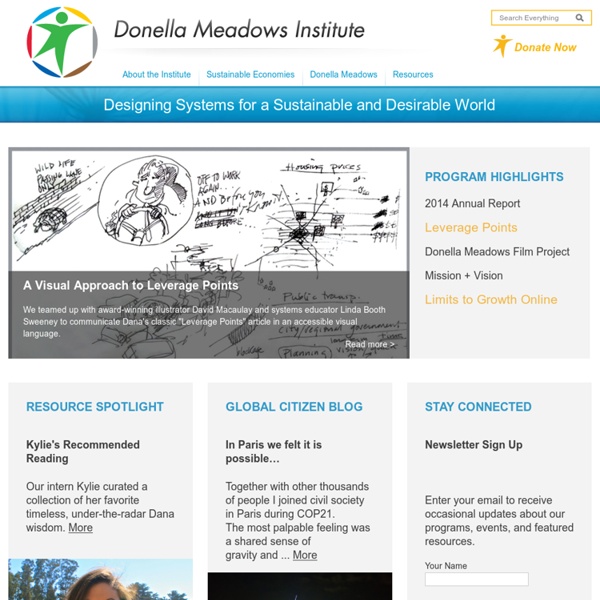 Life: What are the top 10 things that we should be informed about, in life 40 years “LIMITS TO GROWTH” Limits to Growth is a study about the future of our planet. On behalf of the Club of Rome, Donnella Meadows, Dennis Meadows, Jorgen Randers and their team worked on systems analysis at Jay W. Forrester’s institute at MIT. Most scenarios resulted in an ongoing growth of population and of the economy until to a turning point around 2030. Peak Oil "We must leave oil before it leaves us" Fatih Birol, Chief Economist EIA, 2008 Peak Oil represents the point in time when roughly half of the ultimate available oil has already been used. Are there Limits to Growth? Webcast of Ian Johnson's speech "Limits to Growth - A Re-assessment" in the Seminar Series 2011 - "Is the Planet Full?" Model the Future International Futures - a modeling system International Futures (IFs) is a large-scale, long-term, integrated global modeling system. What was the message of Limits to Growth by Jorgen Randers, one of the authors of "Limits to Growth" Read or download print version [...] read more In 2000, Matthew R.

Breakfast: What do people eat for breakfast outside of the US Terre à terre, les archives Foods that Feed The Pineal Gland Our pineal gland otherwise known as our master gland or the gland that governs over our third eye is the center of psychic awareness in the human mind. It is about the size of a pea and sits inside a cave located behind the pituitary gland. It naturally produces a hormone called melatonin which regulates human daily body rhythms that deal directly with the day and night cycles. Developing and expanding the function and the energy of your pineal gland is extremely important as it affects every system in your body physically and it has the potential to determine the expansion or the contraction of your psychic awareness, consciousness, and experience. Sunlight is extremely important for the pineal gland and yes sunlight is a form of food as food is any substance that nourishes the body. Sunlight can be taken in and digested through the eyes, skin, hair, nose hairs, and ears and should be consumed for at least 30 minutes a day. WANT TO USE THIS ARTICLE IN YOUR E-ZINE OR WEB SITE?

{sciences²} Legal Marijuana Sales Set To Quadruple By 2018: Study U.S. legal marijuana sales are projected to hit $1.5 billion this year, and that could look like nothing in just a few years. Data from Medical Marijuana Business Daily shows that total sales could quadruple to $6 billion by 2018 on the back of legalization efforts in Washington and Colorado, as well as the growing nationwide medical marijuana industry. The two states both legalized the recreational use of weed in November. Elsewhere, 18 states and Washington, D.C. have made medical marijuana legal, while 10 others have formal measures pending to legalize medical marijuana, according to the National Cannabis Industry Association. That's reflective of a wider acceptance of the drug. Such growing support has led marijuana-tied businesses to pitch their companies to Wall Street investors, the Los Angeles Times reported in March. Thinking about investing in the marijuana industry yourself? (h/t USA Today) Also on HuffPost:

Passeur de sciences | Petites et grandes nouvelles dans l'actualité des sciences et de l'environnement Aquaponics | teachem TEDxWarwick - Charlie Price - Aquaponics - Getting More out of Less Charlie Price from the social enterprise Aquaponics UK, explores the role aquaponics can play in the future of our collective food supply. He provides an insight into both the applications for aquaponics but more specifically a new approach to urban agriculture, turning wastes into resources and transforming disused urban spaces to provide not only food, but resilient communities. About TEDx, x = independently organized event In the spirit of ideas worth spreading, TEDx is a program of local, self-organized events that bring people together to share a TED-like experience. At a TEDx event, TEDTalks video and live speakers combine to spark dep discussion and connection in a small group.

Le Blog d'Olivier Berruyer sur les crises actuelles Strategy Game – Free Online Multiplayer Strategy Games | eRepublik Oil Man | Chroniques du début de la fin du pétrole, par Matthieu Auzanneau Naked Statistics Stripping the Dread from the Data Charles Wheelan (Author, Dartmouth College) The best-selling author of Naked Economics defies the odds with a book about statistics that you’ll welcome and enjoy. Once considered tedious, the field of statistics is rapidly evolving into a discipline Hal Varian, chief economist at Google, has actually called “sexy.” From batting averages and political polls to game shows and medical research, the real-world application of statistics continues to grow by leaps and bounds. For those who slept through Stats 101, this book is a lifesaver. And in Wheelan’s trademark style, there’s not a dull page in sight. Book Details Hardcover January 2013 ISBN 978-0-393-07195-5 6.5 × 9.6 in / 302 pages Sales Territory: Worldwide Other Formats Naked Statistics: Stripping the Dread from the Data Paperback Endorsements & Reviews “While a great measure of the book’s appeal comes from Mr. “The best math teacher you never had. “Naked Statistics is an apt title. All Subjects

Unité mixte de recherche Ecologie de Biogéochimie des Sols et Agro-systèmes - CoffeeFlux Measuring and modelling water, sediment and carbon Ecosystem Services in an agroforestry coffee watershed (Costa Rica) Aims and "Philosophy" of the CAFNET/Coffee-Flux Project "Coffee-flux” is a platform where collaborative research on coffee agroforestry is promoted: data are being shared between collaborators and positive interactions are enhanced. The philosophy is to concentrate several investigations on one specific site and for several years, to share a useful common experimental database, to develop modelling and to publish results in highly-ranked scientific journals. Partners, sponsors and networks Coffee-flux was launched in December 2009 in Costa Rica by Cirad, CATIE , Agroforestery systems with perennial crops PCP and the Aquiares farm. Coffee-Flux is a contributor of FLUXNET and became an Observatory within the European and french TGIR SOERE F-ORE-T network in early 2011. Site and infrastructure description Monitoring of Environmental Services Hydrological service: Carbon service: