"The Poetics 'They' Don't Want You to Know About"

An almost unique modern instance of the equivoque poem. Aklo polka. (via) The "heterogeneous palindrome" as named (& probably invented) by Anthony Etherin is almost too ingenious to be appreciated by the reader, yet there is undoubtedly intellectual-beauty to be found in the way it can encode number sequences (such as several decimals of a famous irrational number) into a verbal construct (i hardly dare call them "poems"--yet what else are they?). 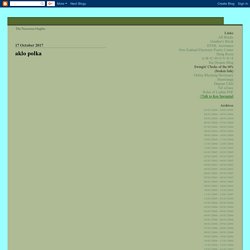 One way to make its structure more obvious is to use color. Ghazal. Notarikon. Double acrostic. Double Acrostic [Addressed to two children, whose names form the two “upright” words, which are supposed to be described in the first stanza.] 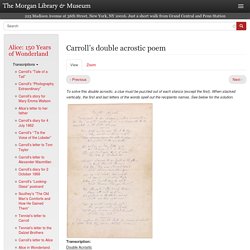 Two little maids were heard to say, (They dwelt in London-city),“This summer-day’s too hot to play, And picture-books are pretty.” So, curling up like little mice,And clasping hand in hand,They read (& whispered “Aint it nice!”) The tale of Wonderland. Bright streamed the sunlight on the floor, To tempt them out to run;But they (like mice, I’ve said before) Loved shadow more than sun. And one cried “Sister, let’s invent A dream—and plan to goWhere Mr. The other said “It’s nearly three: Papa will call us soon.His pictures on the stand, and we Must sit this afternoon.”

“And if we sit extremely good,” The younger cried in haste,“He’ll give us wine—he said he would— A little tiny taste!” [In explanation of the last two verses, it should Be added that they are an Artists’ children.] A lic EG loo MN ijn I*E ase LS herr Y. A miniature form. Via Abu-Lughod: The Ghinnawa is a 15 syllable couplet divided into units: 1234/56789. 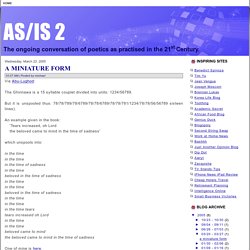 For family alliteration: One problem i encounter while attempting various Old English metrics in Modern English, is the relative paucity of useful synonyms for a given initial consonant. The other day it occurred to me that what was required might be simply a broadening of the definition of what "alliterating" amounts to. For precedent, in Old Irish versification, the consonants are grouped in such a way that any consonant in one group is counted as rhyming (with the proper vowel) with any other in the same group. I see two different ways to apply this to alliteration, one simple & one not so simple. First, the groups P,T,K-B,D,G-L,R,M,N,W-F,S,Th,Sh and perhaps Z,Zh,J,Ch,Dh suggest themselves. (I call this option "girzylerfu".) Then there is a more phonologically precise, three-dimensional mapping which resembles a double cube, with the first face (clockwise): P-F-V-B, the second T-Th-Dh-D, the third K-H-Gh-G; & then (separately) Ch-J over Sh-Zh over S-Z, and the W-shaped M-N-Ng with its verticals (not connected) of B & D & G. In this schema only single "kingwise-steps" are allowed (no diagonals). Thus, for instance, T with P but not with F. This one i call "pavyjorne" or kthueb. I refer to either as Family Alliteration. – graywyvern

Pi-ectype. Michael Keith rewrote Edgar Allen Poe’s poem The Raven to turn it into a mnemonic for pi. 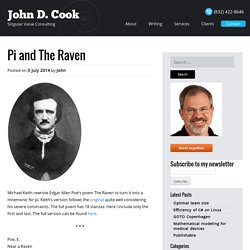 Keith’s version follows the original quite well considering his severe constraints. The full poem has 18 stanzas. Here I include only the first and last. The full version can be found here. Poe, E. Dorf poetic forms. Centos. Anagram-poems (eadds) Whole-word wordsquare. Paradelle. Villanelle. Poetry defined. My contribution to the art of poetry criticism. The snowflake stanza. Twenty Consonant Poetry. Makrugh. Of the form called "makrugh". 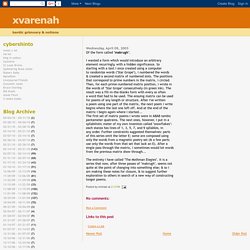 I wanted a form which would introduce an arbitrary element recurringly, with a hidden significance. So starting with a text i once created using a computer to randomize words ("Star Grope"), i numbered the words & created a second matrix of numbered slots. The positions that correspond to prime numbers in the matrix, i circled. Then, for each prime-numbered matrix position, i wrote in the words of "Star Grope" consecutively (in green ink). The result was a fill-in-the-blanks form with every so often a word that had to be used.

Haiku looth as though, Whispered, the argent Book boiled down all day. – graywyvern

"The Fall of Baghdad" Dark candle, you could call me Now or let this knife make Noise Across my moon snow Each slavish landscape void Puts less out. (4/2003) (My thought: It might be easier if schwas didn't count.) – graywyvern

Proposal for a super-sestina. A contemporary Russian painter.

I heartily endorse the idea of an "anagrammatic sestina" although it is not so easy to find lists of six usable anagrams of one letter set (apparently this was invented by oskar pastior ) (though here is another ) (& anthony etherin has an anagram-line one: ) ...well it just got easier – graywyvern

A History of the Sestina is included in Wilmon Brewer's 1937 book Sonnets and Sestinas (whom Carol Shields calls "a ferocious old sonnet-writer"). – graywyvern

I was reading a Blok poem, or sequence of poems, in which some of the endwords repeated across poems; & though it was an unrhymed translation of what was surely a rhymed original, the effect pleased me & i wanted to utilize the form in a sequence of my own. 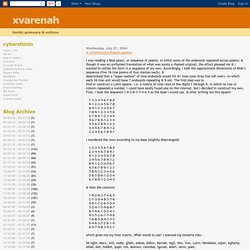 Accordingly, i took the approximate dimensions of Blok’s sequence (five 16-line poems of four stanzas each), & determined that a “super-sestina” of nine endwords would fill 81 lines (one stray line left over)--in which each 16-line unit would have 7 endwords repeating & 9 not. "In Defense of the Anachuttle" by Walter Shedlofsky. A sample of the best beowulf. Zij.

See the essay "poegematry" for how this is used – graywyvern

Guide to Verse Forms. Vergil's aesthetics. Criss-cross rhyme. Quote: i wouldn't ordinarily write in this section, but as i have made a particular study of this system & use it extensively, i can perhaps add a bit of useful information. this is "analyzed rhyme" as its inventor called it (Edward Davison in Some Modern Poets, 1928); i call it "crisscross" because vowels are ABAB & consonants are ABBA (you can, of course, do the opposite--also, sestets, ktp). it has hardly been tried since Auden (i can only think of Marilyn Hacker's "Partial Analysis" in Taking Notice, 1980) but i find it just as forcing as (& far less hackneyed than) the usual varieties. 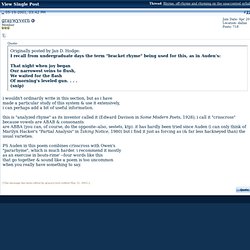 PS Auden in this poem combines crisscross with Owen's "pararhyme", which is much harder. i recommend it mostly as an exercise in bouts-rime' --four words like this that go together & sound like a poem is too uncommon when you really have something to say. Golden sonnet.

Sator square. What's this small masterpiece of literal engineering, readable in many directions? 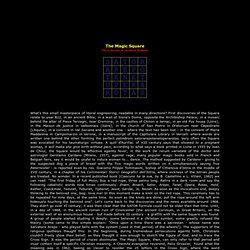 First discoveries of the Square relate to year 822, in an ancient Bible; in a wall of Siena's Dome, opposite the Archibishop Palace; in a mosaic behind the altar of Pieve Terzagni, near Cremona; in the castles of Chinon e Jarnac; in an old Puy house (Loire); in the Maison de justice in Valbonnais (Isère); in the church of San Pietro in Oratorium near Capestrano (L'Aquila); in a convent in Val Seriana and another one - where the text has been lost - in the convent of Maria Maddalena in Campomarzio in Verona; in a manuscript of the Capitolare Library in Vercelli where words are written one behind the other forming the perfect palindrom satorarepotenetoperarotas. Very often the Square was evocated for his taumaturgic virtues. It was a triumph for the supporters of the religious theory. Anagrams. Beginning of arbatel. Alliterative revival page.

Essay on Quantitative Meter. Slakyteirilti There never would've been any fascination with retrofitting Greek meters for English verse in the first place, if not for the truly amazing gallumph of the Latin thing. 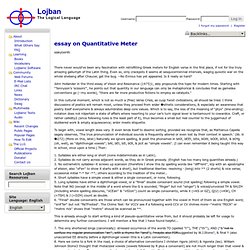 Even so, only crackpots it seems at sesquicentennial intervals, waging quixotic war on the whole shebang after Chaucer, get the bug. --No Ennius has yet appeared. Is it really so hard? John Hollander in the third essay of Vision and Resonance (1975)1, ably propounds this topic for modern times. In this cultural moment, which is not so much a (free) Verse Crisis, as cusp 'twixt civilizations, all should be tried.

To begin with, vowel length does vary. 1. This is already enough to start writing a kind of pseudo-quantitative verse from, but it should probably be left for usage to determine any further conventions. 7. Syllabic-accentual verse read out loud used to fall prey to a singsong intonation that imposed a mechanical alternation of stresses, whether or not it fit the natural utterance. Notes & samples.