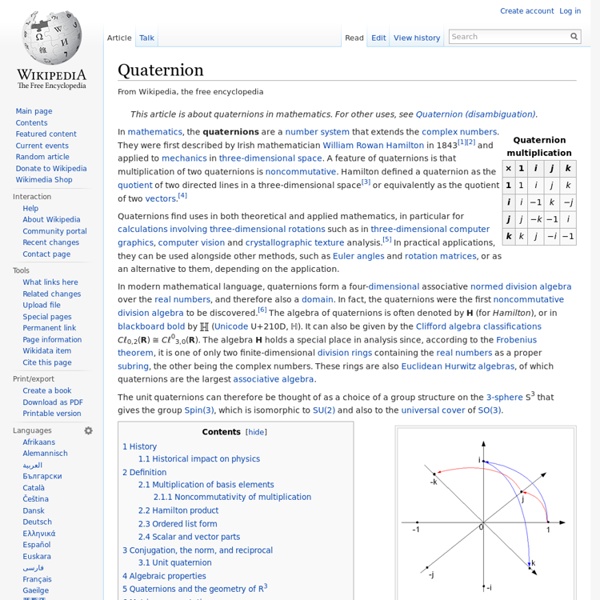 Graphical representation of quaternion units product as 90°-rotation in 4D-space, ij = k, ji = −k, ij = −ji History[edit] Quaternion plaque on Brougham (Broom) Bridge, Dublin, which says: Here as he walked by on the 16th of October 1843 Sir William Rowan Hamilton in a flash of genius discovered the fundamental formula for quaternion multiplicationi2 = j2 = k2 = ijk = −1 & cut it on a stone of this bridge Quaternion algebra was introduced by Hamilton in 1843.[7] Important precursors to this work included Euler's four-square identity (1748) and Olinde Rodrigues' parameterization of general rotations by four parameters (1840), but neither of these writers treated the four-parameter rotations as an algebra.[8][9] Carl Friedrich Gauss had also discovered quaternions in 1819, but this work was not published until 1900.[10][11] i2 = j2 = k2 = ijk = −1, into the stone of Brougham Bridge as he paused on it. On the following day, Hamilton wrote a letter to his friend and fellow mathematician, John T. Related:  .caisson

Convex regular polychoron The tesseract is one of 6 convex regular polychora In mathematics, a convex regular polychoron is a polychoron (4-polytope) that is both regular and convex. These are the four-dimensional analogs of the Platonic solids (in three dimensions) and the regular polygons (in two dimensions). These polychora were first described by the Swiss mathematician Ludwig Schläfli in the mid-19th century. Schläfli discovered that there are precisely six such figures. Properties[edit] Since the boundaries of each of these figures is topologically equivalent to a 3-sphere, whose Euler characteristic is zero, we have the 4-dimensional analog of Euler's polyhedral formula: where Nk denotes the number of k-faces in the polytope (a vertex is a 0-face, an edge is a 1-face, etc.). Visualizations[edit] The following table shows some 2-dimensional projections of these polychora. See also[edit] References[edit] External links[edit]

4-manifold In mathematics, 4-manifold is a 4-dimensional topological manifold. A smooth 4-manifold is a 4-manifold with a smooth structure. In dimension four, in marked contrast with lower dimensions, topological and smooth manifolds are quite different. There exist some topological 4-manifolds which admit no smooth structure and even if there exists a smooth structure it need not be unique (i.e. there are smooth 4-manifolds which are homeomorphic but not diffeomorphic). 4-manifolds are of importance in physics because, in General Relativity, spacetime is modeled as a pseudo-Riemannian 4-manifold. Topological 4-manifolds[edit] Examples: Freedman's classification can be extended to some cases when the fundamental group is not too complicated; for example, when it is Z there is a classification similar to the one above using Hermitian forms over the group ring of Z. For any finitely presented group it is easy to construct a (smooth) compact 4-manifold with it as its fundamental group. See also[edit]

Four-dimensional space In modern physics, space and time are unified in a four-dimensional Minkowski continuum called spacetime, whose metric treats the time dimension differently from the three spatial dimensions (see below for the definition of the Minkowski metric/pairing). Spacetime is not a Euclidean space. History[edit] An arithmetic of four dimensions called quaternions was defined by William Rowan Hamilton in 1843. This associative algebra was the source of the science of vector analysis in three dimensions as recounted in A History of Vector Analysis. Soon after tessarines and coquaternions were introduced as other four-dimensional algebras over R. One of the first major expositors of the fourth dimension was Charles Howard Hinton, starting in 1880 with his essay What is the Fourth Dimension? Little, if anything, is gained by representing the fourth Euclidean dimension as time. Vectors[edit] This can be written in terms of the four standard basis vectors (e1, e2, e3, e4), given by Geometry[edit]

The Brane multiverse Eternal inflation Eternal inflation is predicted by many different models of cosmic inflation. MIT professor Alan H. Guth proposed an inflation model involving a "false vacuum" phase with positive vacuum energy. Parts of the Universe in that phase inflate, and only occasionally decay to lower-energy, non-inflating phases or the ground state. In chaotic inflation, proposed by physicist Andrei Linde, the peaks in the evolution of a scalar field (determining the energy of the vacuum) correspond to regions of rapid inflation which dominate. Alan Guth's 2007 paper, "Eternal inflation and its implications",[1] details what is now known on the subject, and demonstrates that this particular flavor of inflationary universe theory is relatively current, or is still considered viable, more than 20 years after its inception.[2] [3][4] Inflation and the multiverse[edit] Both Linde and Guth believe that inflationary models of the early universe most likely lead to a multiverse but more proof is required. History[edit]

Brane cosmology Brane cosmology refers to several theories in particle physics and cosmology related to string theory, superstring theory and M-theory. Brane and bulk[edit] The central idea is that the visible, four-dimensional universe is restricted to a brane inside a higher-dimensional space, called the "bulk" (also known as "hyperspace"). Why gravity is weak and the cosmological constant is small[edit] Some versions of brane cosmology, based on the large extra dimension idea, can explain the weakness of gravity relative to the other fundamental forces of nature, thus solving the so-called hierarchy problem. Models of brane cosmology[edit] One of the earliest documented attempts to apply brane cosmology as part of a conceptual theory is dated to 1983.[5] The authors discussed the possibility that the Universe has dimensions, but ordinary particles are confined in a potential well which is narrow along spatial directions and flat along three others, and proposed a particular five-dimensional model.

The Inflationary universe Many-worlds interpretation The quantum-mechanical "Schrödinger's cat" paradox according to the many-worlds interpretation. In this interpretation, every event is a branch point; the cat is both alive and dead, even before the box is opened, but the "alive" and "dead" cats are in different branches of the universe, both of which are equally real, but which do not interact with each other.[1] The many-worlds interpretation is an interpretation of quantum mechanics that asserts the objective reality of the universal wavefunction and denies the actuality of wavefunction collapse. The original relative state formulation is due to Hugh Everett in 1957.[3][4] Later, this formulation was popularized and renamed many-worlds by Bryce Seligman DeWitt in the 1960s and 1970s.[1][5][6][7] The decoherence approaches to interpreting quantum theory have been further explored and developed,[8][9][10] becoming quite popular. Before many-worlds, reality had always been viewed as a single unfolding history. Outline[edit] Wojciech H.