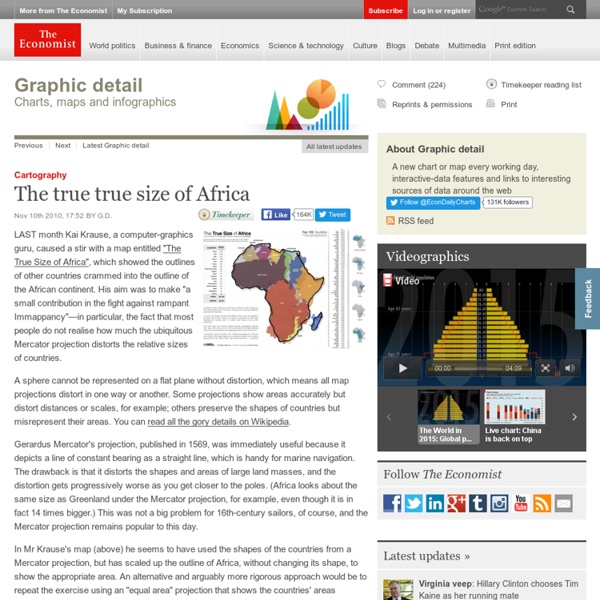 LAST month Kai Krause, a computer-graphics guru, caused a stir with a map entitled "The True Size of Africa", which showed the outlines of other countries crammed into the outline of the African continent. His aim was to make "a small contribution in the fight against rampant Immappancy"—in particular, the fact that most people do not realise how much the ubiquitous Mercator projection distorts the relative sizes of countries. A sphere cannot be represented on a flat plane without distortion, which means all map projections distort in one way or another. Some projections show areas accurately but distort distances or scales, for example; others preserve the shapes of countries but misrepresent their areas. You can read all the gory details on Wikipedia. Gerardus Mercator's projection, published in 1569, was immediately useful because it depicts a line of constant bearing as a straight line, which is handy for marine navigation.

Choosing the best way to indicate map scale By Aileen Buckley, Mapping Center Lead In a previous blog entry, I asked, “Do all maps need a scale bar and north arrow?” I answered, “No” and talked a little about direction indicators like north arrows, but I didn’t really go into any detail about scale bars.

This Is What A World Map Looks Like When Scaled According To Population Size Where in the world did Australia go?! A new cartogram by Redditer TeaDranks rescales the world’s countries according to population size instead of geographic area. Reconstructing maps based on different variables can be a powerful tool for understanding the world we live in. In this case, certain regions almost disappear from the map while others expand considerably; Canada transforms into a thin, jagged line while India now takes up a massive amount of space. Ancient dogs in the Americas yields insights into human, dog migration A new study suggests that dogs may have first successfully migrated to the Americas only about 10,000 years ago, thousands of years after the first human migrants crossed a land bridge from Siberia to North America. The study looked at the genetic characteristics of 84 individual dogs from more than a dozen sites in North and South America, and is the largest analysis so far of ancient dogs in the Americas. The findings appear in the Journal of Human Evolution.

Word Map This experiment brings together the power of Google Translate and the collective knowledge of Wikipedia to put into context the relationship between language and geographical space. Please let us know if you have any suggestions. Note that not all languages are currently supported by Google Translate. To browse, just zoom in/out, pan around and click on the word to learn more. Enjoy! Mysterious pre-Columbian spheres on show in Costa Rican capital The mysterious pre-Columbian spheres and other objects from an area in southern Costa Rica declared a World Heritage site by UNESCO can now be seen at in an exhibition in San Jose. The National Museum of Costa Rica opened a show this week entitled "Diquis: World Heritage Site," which presents stone spheres and other objects from four pre-Columbian indigenous settlements near the town of Osa in the southern province of Puntarenas. "This exhibition helps us understand their cultural development. It's important to realize there were societies with a very complex organization at the political, cultural and religious levels," the museum curator, Adrian Badilla, told Efe. The show includes 67 pre-Columbian objects in stone, ceramic, gold, bone and shell that reveal the creativity and craftsmanship of inhabitants of the Diquis Delta.

40 maps that explain the internet The internet increasingly pervades our lives, delivering information to us no matter where we are. It takes a complex system of cables, servers, towers, and other infrastructure, developed over decades, to allow us to stay in touch with our friends and family so effortlessly. Here are 40 maps that will help you better understand the internet — where it came from, how it works, and how it's used by people around the world. How the internet was created Before the internet, there was the ARPANET Before the internet, there was the ARPANETARPANET, the precursor to the modern internet, was an academic research project funded by the Advanced Research Projects Agency, a branch of the military known for funding ambitious research projects without immediate commercial or military applications. Initially, the network only connected the University of Utah with three research centers in California.

map_what_europe_would_look_like_if_all_the_separatist_movements_got_their This article originally appeared in Business Insider. The Scottish independence movement will embolden other active separatist groups in Europe to win their freedom, whether or not Scotland votes to secede from the UK on Thursday. From Catalonia and Basque Country in Spain to Veneto, South Tyrol, and the island of Sardinia in Italy to Flanders in Belgium, "the precedent of the vote on self-determination will reverberate around the Continent," the New York Times writes.

Africa defies Rome' at The British Museum Find out how this iconic bronze head of Rome’s first emperor Augustus became a symbol of African resistance in the ancient royal city of Meroë, in northern Sudan. When the Meroë Head was excavated in 1910, it caused an immediate sensation. It is remarkably well preserved and only survived because in antiquity it was ritually buried far from the borders of the Roman Empire. In this display you will come face to face with this potent symbol of Rome’s authority, and see how grains of sand, fused to the corroded surface of the bronze, still hint at its dramatic fate. Augustus became sole ruler in 27 BC, after a civil war that followed Julius Caesar’s assassination. The Meroë Head must have been created soon after.

100 Years of National Geographic Maps: The Art and Science of Where The coordinates of the office of The Geographer of the National Geographic Society are 38° 54' 18" N, 77° 2' 12" W. You might say that Juan José Valdés, who currently holds that title, knows exactly where he stands. But the scope of National Geographic's cartographic department, which celebrates its hundredth anniversary this year, encompasses not just those bearings, but also those of every mountain, river, lake, road, reef, fjord, island, inlet, glacier, ocean, planet, galaxy, and solar system—in short, any physical feature on land, on sea, or in space. At this writing (the count is obsolete as soon as it is tallied), National Geographic cartographers have produced 438 supplement maps, ten world atlases, dozens of globes, about 3,000 maps for the magazine, and many maps in digital form. What distinguishes a National Geographic map? Accuracy and attention to detail, certainly.

World Population Cube - Views of the World Last November’s theme of the Super Science Saturday at the Oxford University Museum of Natural History was Planet Earth. As part of the activities I contributed a map cube which I created a few years ago.Cubic globes are not a new idea. They put a nice twist to showing just a simple map, and more importantly, they allow for some activity which get the kids involved just as much as adults. A cube is much less work than creating a spheric version of Earth, and (as said by Carlos Furuti on his online cube globe collection) the cube is an ideal introduction to folding one’s own pseudoglobes. At last November’s Super Science Saturday I displayed some of my work and offered a ‘Map Cube Activity’ where children (and adults) could cut, fold and glue their own globes. My version of a map cube does not display a normal world map, but a gridded population cartogram (hence the name ‘World Population Cube’).

Mapping Inca Times in Subterranean Cusco Cusco’s rooftops (Photo courtesy of Kenneth Moore/flickr) Peru’s culture ministry has announced a new subterranean mapping initiative that will allow archaeologists to explore pre-Columbian Cusco without picking up any shovels, the AFP reported. In the 16th century, Spanish conquistadors invaded the magnificent Inca capital, razed its buildings, and symbolically constructed their own homes, cathedrals, and municipal buildings atop the ruins. “The historic center of Cusco is like an overlay of several skins, you lift a stone and you find amazing vestiges of earlier cultures,” Ricardo Ruiz Caro, a culture ministry spokesperson, said. Travel to the city today, and you can sleep in a 17th-century mansion built on a pre-Hispanic foundation or wander through a monastery constructed above the Inca temple of Qurikancha.

This map of Earth is the most accurate ever produced, and it looks completely different Japanese architect Hajime Narukawa claims to have tackled a centuries-old problem - how to draw an oblate spheroid Earth on a flat plane. He claims the above map, called the AuthaGraph World Map, achieves this task. The projection, first created in 1999, frames the world's physical components in a 2D rectangle, attempting to represent their relative sizes as accurately as possible. It does so by dividing the world into 96 triangles, making it a tetrahedron, then unfolding it to become a rectangle. Unlike the traditional Mercator map, made in the 16th century, which overstates the size of northern areas like Greenland and minimizes that of central areas like Africa, the AuthaGraph World Map retains parity of area to a 3D projection.

Aztec app brings historic Mexico codex into the digital age A 16th century document considered one of the most important primary sources on the Aztecs of pre-Columbian Mexico went digital Thursday with a new app that aims to spur research and discussion. The Codex Mendoza is a 1542 illustrated report ordered by Spanish viceroy Antonio de Mendoza that details sources of riches, Aztec expansion and territorial tributes, and chronicles daily life and social dynamics. The new interactive codex lets users page through the virtual document, mouse-over the old Spanish text for translations into English or modern Spanish, click on images for richer explanations and explore maps of the area. Presented by Mexico's National Institute of Anthropology and History, the digital codex is available free both on the Internet and through Apple's App Store as a 1.02-gigabyte app.