Irony punctuation. Irony punctuation is any proposed form of notation used to denote irony or sarcasm in text. Written English lacks a standard way to mark irony, and several forms of punctuation have been proposed. Among the oldest and most frequently attested are the percontation point proposed by English printer Henry Denham in the 1580s, and the irony mark, used by Marcellin Jobard and French poet Alcanter de Brahm during the 19th century. Both marks take the form of a reversed question mark, "⸮". 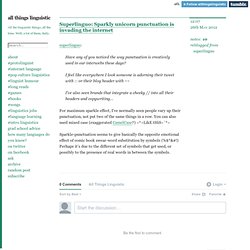 I feel like everywhere I look someone is adorning their tweet with :: or their blog header with ~~I’ve also seen brands that integrate a cheeky // into all their headers and copywriting… For maximum sparkle effect, I’ve normally seen people vary up their punctuation, not put two of the same things in a row. Oracle bone script. Oracle bone script (Chinese: 甲骨文; pinyin: jiǎgǔwén; literally "shell bone writing") refers to incised (or, rarely, brush-written[1]) ancient Chinese characters found on oracle bones, which were animal bones or turtle shells used in divination in Bronze Age China. 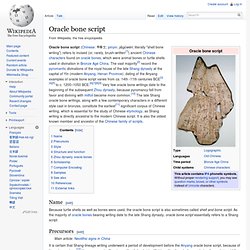 Name[edit] Because turtle shells as well as bones were used, the oracle bone script is also sometimes called shell and bone script. As the majority of oracle bones bearing writing date to the late Shang dynasty, oracle bone script essentially refers to a Shang script. Precursors[edit] It is certain that Shang-lineage writing underwent a period of development before the Anyang oracle bone script, because of its mature nature.[12] However, no significant quantity of clearly identifiable writing from before or during the early to middle Shang cultural period has been discovered.

Style[edit] Chinese Characters and Genesis. The purpose of this page is to respond to Web sites that claim that the composition of certain Chinese characters reveals that the ancient Chinese who created those characters had some knowledge of ideas that show up in Genesis. 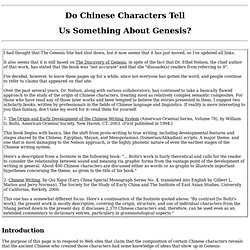 For now, I will respond specifically to those claims that have been published at The Genesis Site. (My purpose is not to write a treatise on the origins of Chinese characters, but simply to show where the creators of The Genesis Site have gone wrong.) I want to say at the beginning that I welcome any substantiated corrections--citing sources where appropriate.

Send emails to mike at this domain (raccoonbend, with the usual dot suffix). Mandarin pronunciations will be given in Pinyin romanization, with tone numbers, rather than tone marks. Yingzi. Also see the Belorussian translation provided by Fatcow. 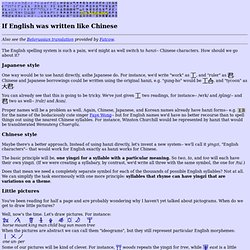 The English spelling system is such a pain, we'd might as well switch to hanzi-- Chinese characters. How should we go about it? Japanese style One way would be to use hanzi directly, asthe Japanese do. For instance, we'd write "work" as , and "ruler" as . Rongo­rongo. By Jacques B.M. 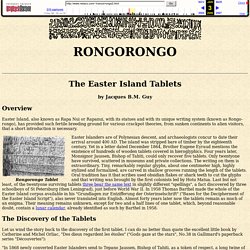 Guy Overview Easter Island, also known as Rapa Nui or Rapanui, with its statues and with its unique writing system (known as Rongo­rongo), has provided such fertile breeding ground for various crackpot theories, from sunken continents to alien visitors, that a short introduction is necessary. Easter Islanders are of Polynesian descent, and archaeologists concur to date their arrival around 400 AD.

The island was stripped bare of timber by the eighteenth century. The Discovery of the Tablets. Ancient Scripts: Home. Ogham. Trail Signs of Direction, Dan Beard. When the trees blanketed our continent from the Atlantic Ocean to the Mississippi River with a dark and gloomy forest in which there were only occasional openings, or prairies like those which existed in Indiana and Illinois, it was necessary to mark the trails through the woods in order that one should not become lost. 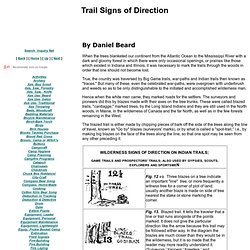 True, the country was traversed by Big Game trails, war-paths and Indian trails then known as "traces. " But many of these, even the celebrated war-paths, were overgrown with underbrush and weeds so as to be only distinguishable to the initiated and accomplished wilderness man. Hence when the white men came, they marked roads for the settlers. English spelling reform: Wy can't we get it rite? GHOTI. Gh cannot have an "F" sound at the beginning of a word (give just one example) ti cannot have an "SH" sound at the end of a word (give just one example) 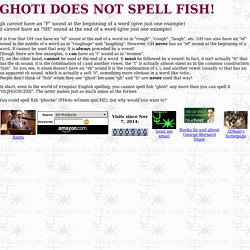 Yntrodxkshxn tu Nuspelynh. (Introduction to Newspelling) Douglas Crockford www.crockford.com Correct spelling and pronouncing of English words are very hard because words are not spelled as they sound. 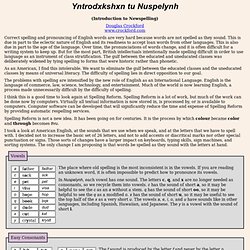 This is due in part to the eclectic nature of English and its readiness to accept loan words from other languages. This is also due in part to the age of the language. Over time, the pronunciations of words change, and it is often difficult for a writing system to keep up. As an American, I find this intolerable. Writing Systems TRED 256 Class 5. Grammar Test Writing Systems (second part; p. 518-527) Linguistics test (Take home) Applications Presentation: Jon & Rebecca: Movie (Ipod/iTunes version) Writing Systems Allison's PowerPoint Handout. 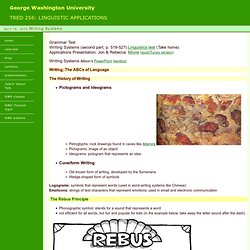