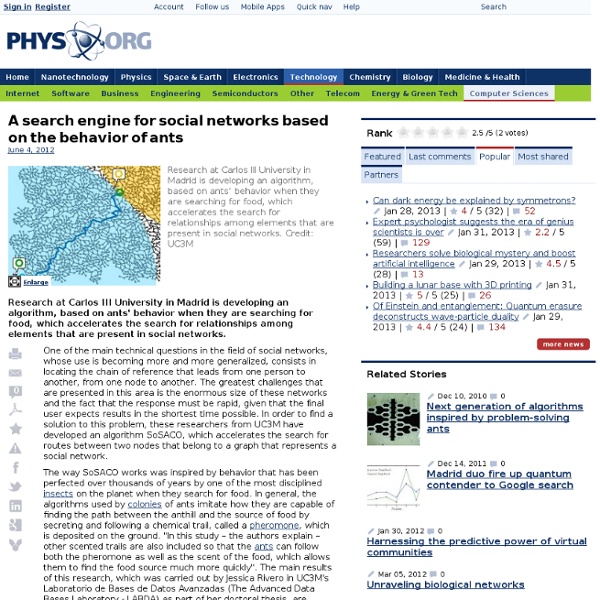 Research at Carlos III University in Madrid is developing an algorithm, based on ants' behavior when they are searching for food, which accelerates the search for relationships among elements that are present in social networks. One of the main technical questions in the field of social networks, whose use is becoming more and more generalized, consists in locating the chain of reference that leads from one person to another, from one node to another. The greatest challenges that are presented in this area is the enormous size of these networks and the fact that the response must be rapid, given that the final user expects results in the shortest time possible. The way SoSACO works was inspired by behavior that has been perfected over thousands of years by one of the most disciplined insects on the planet when they search for food. Multiple applications Explore further: See what a child will look like using automated age-progression software (w/ video) Related:  Social Network Systems

Computational social science: Making the links Jon Kleinberg's early work was not for the mathematically faint of heart. His first publication1, in 1992, was a computer-science paper with contents as dense as its title: 'On dynamic Voronoi diagrams and the minimum Hausdorff distance for point sets under Euclidean motion in the plane'. That was before the World-Wide Web exploded across the planet, driven by millions of individual users making independent decisions about who and what to link to. And it was before Kleinberg began to study the vast array of digital by-products generated by life in the modern world, from e-mails, mobile phone calls and credit-card purchases to Internet searches and social networks. “I realized that computer science is not just about technology,” he explains. Kleinberg is not alone. “It's been really transformative,” says Michael Macy, a social scientist at Cornell and one of 15 co-authors of a 2009 manifesto4 seeking to raise the profile of the new discipline. Social calls Infectious ideas Message received

Applying algorithm to social networks can reveal hidden connections criminals use to commit fraud Fraudsters beware: the more your social networks connect you and your accomplices to the crime, the easier it will be to shake you from the tree. The Steiner tree, that is. In an article recently published in the journal Computer Fraud and Security, University of Alberta researcher Ray Patterson and colleagues from the University of Connecticut and University of California – Merced outlined the connection linking fraud cases and the algorithm designed by Swiss mathematician Jakob Steiner. The criminal path of least resistance To quote a television gumshoe, everything's connected. "You're really trying to find the minimum set of connectors that connect these people to the various [network] resources," he said. Fraud and the Steiner tree, by the numbers In their article, Patterson and his colleagues explored how networks such as phone calls, business partnerships and family relationships are used to form essential relationships in a fraud investigation.

Mapping Twitter Topic Networks: From Polarized Crowds to Community Clusters Polarized Crowds: Political conversations on Twitter Conversations on Twitter create networks with identifiable contours as people reply to and mention one another in their tweets. These conversational structures differ, depending on the subject and the people driving the conversation. Six structures are regularly observed: divided, unified, fragmented, clustered, and inward and outward hub and spoke structures. If a topic is political, it is common to see two separate, polarized crowds take shape. While these polarized crowds are common in political conversations on Twitter, it is important to remember that the people who take the time to post and talk about political issues on Twitter are a special group. Still, the structure of these Twitter conversations says something meaningful about political discourse these days and the tendency of politically active citizens to sort themselves into distinct partisan camps. Conversational archetypes on Twitter What this all means Figure 2 Figure 3

Facebook feelings are contagious: Study examines how emotions spread online You can’t catch a cold from a friend online. But can you catch a mood? It would seem so, according to new research from the University of California, San Diego. Published in PLOS ONE, the study analyzes over a billion anonymized status updates among more than 100 million users of Facebook in the United States. “Our study suggests that people are not just choosing other people like themselves to associate with but actually causing their friends’ emotional expressions to change,” said lead author James Fowler, professor of political science in the Division of Social Sciences and of medical genetics in the School of Medicine at UC San Diego. There is abundant scientific literature on how emotion can spread among people – through direct contact, in person – not only among friends but also among strangers or near-strangers. Fowler worked on the study with Lorenzo Coviello – a PhD student in the electrical and computer engineering department of the UC San Diego Jacobs School of Engineering.

Measuring Large-Scale Social Networks with High Resolution This paper describes the deployment of a large-scale study designed to measure human interactions across a variety of communication channels, with high temporal resolution and spanning multiple years—the Copenhagen Networks Study. Specifically, we collect data on face-to-face interactions, telecommunication, social networks, location, and background information (personality, demographics, health, politics) for a densely connected population of 1 000 individuals, using state-of-the-art smartphones as social sensors. Here we provide an overview of the related work and describe the motivation and research agenda driving the study. Additionally, the paper details the data-types measured, and the technical infrastructure in terms of both backend and phone software, as well as an outline of the deployment procedures. We document the participant privacy procedures and their underlying principles. Figures Editor: Yamir Moreno, University of Zaragoza, Spain Copyright: © 2014 Stopczynski et al.

The Emerging Science of Superspreaders (And How to Tell If You're One Of Them) Who are the most influential spreaders of information on a network? That’s a question that marketers, bloggers, news services and even governments would like answered. Not least because the answer could provide ways to promote products quickly, to boost the popularity of political parties above their rivals and to seed the rapid spread of news and opinions. So it’s not surprising that network theorists have spent some time thinking about how best to identify these people and to check how the information they receive might spread around a network. Indeed, they’ve found a number of measures that spot so-called superspreaders, people who spread information, ideas or even disease more efficiently than anybody else. But there’s a problem. But there is growing evidence that information does not spread through real networks in the same way as it does through these idealised ones. So the question of how to find the superspreaders remains open.

Social Network Analysis Brief Description: "Social network analysis is the mapping and measuring of relationships and flows between people, groups, organisations, computers or other information/knowledge processing entities." (Valdis Krebs, 2002). History: When to use: Visualize relationships within and outside of the organization.Facilitate identification of who knows who and who might know what - teams and individuals playing central roles - thought leaders, key knowledge brokers, experts, etc.Identify isolated teams or individuals and knowledge bottlenecks.Strategically work to improve knowledge flows.Accelerate the flow of knowledge and information across functional and organisational boundaries.Improve the effectiveness of formal and informal communication channels.Raise awareness of the importance of informal networks. How to use: Informal Face to Face Network Mapping Tools and Software for SNA onas Highly recommend. Training on SNA Tips and Lessons Learnt Examples & Stories Tags