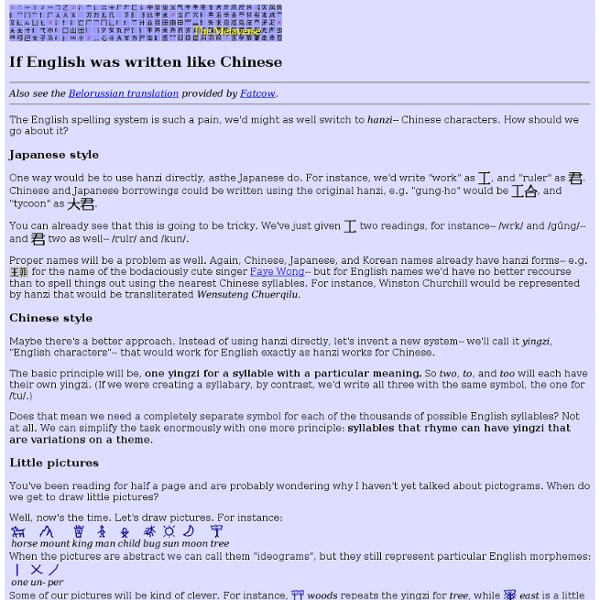 Also see the Belorussian translation provided by Fatcow. The English spelling system is such a pain, we'd might as well switch to hanzi-- Chinese characters. How should we go about it? Japanese style One way would be to use hanzi directly, asthe Japanese do. , and "ruler" as . , and "tycoon" as You can already see that this is going to be tricky. two readings, for instance-- /wrk/ and /gûng/-- and two as well-- /rulr/ and /kun/. Proper names will be a problem as well. for the name of the bodaciously cute singer Faye Wong-- but for English names we'd have no better recourse than to spell things out using the nearest Chinese syllables. Chinese style Maybe there's a better approach. The basic principle will be, one yingzi for a syllable with a particular meaning. Does that mean we need a completely separate symbol for each of the thousands of possible English syllables? Little pictures You've been reading for half a page and are probably wondering why I haven't yet talked about pictograms. wing. .

PARLEZ CHINOIS - apprendre à parler le chinois mandarin How to verify that you use the right Chinese font | Hacking Chinese If you are already literate in Chinese, which font you use to display characters on screen isn’t very important, but for second language learners, it can be very confusing if you use the wrong font (or if someone else is using the wrong font). This is especially true if you’re going to handwrite characters you read from screen (including from most dictionaries). Now, you might think that font choice is a matter of aesthetics, and you’d be mostly right. However, there is a fairly large number of characters that look distinctly different depending on which font you use. These differences are not because of simplified and traditional characters, that’s a completely different issue. I have written more about Chinese fonts and character variations in this article: Chinese character variants and fonts for language learners In this article, I’ll help you make sure you’re using the right font. The Chinese font and character variation checker Checking your fonts More characters that differ choice.

Kickstart your Chinese character learning with the 100 most common radicals | Hacking Chinese I’ve taught many introduction courses in Chinese. Each time, I’ve felt the lack of a beginner-friendly radical list. I often tell students that learning character components is essential, that it’s a long-term investment that will pay off several times over the course of their Chinese studies. I then show them some of the most common radicals. But then what? Beginners often find it hard to determine which components are common and which aren’t. Filling a gap Others lists of common radicals I’ve found are based on data from a very large number of characters. There’s only one problem: 鸟/鳥 is not even close to being the most important radical for beginners to learn. If you only take the most commonly used 2,000 characters into account, 鸟/鳥 only occurs nine times. In other words, while there are many characters that use this radical, most of these characters are not within the most commonly used 2,000 and thus not relevant for beginners or even intermediate learners. Conclusions and reflections

Pinyin Written Chinese Homophonic puns in Mandarin Chinese A sign for a porridge shop in Wenzhou which puns the Wenzhou demonym 溫州人/Wēnzhōurén, altering the second character 州/zhōu to an exact homophone 粥/zhōu meaning porridge, giving 溫粥人 (lit. warm-porridge-people) Mandarin Chinese, like many Sinitic varieties, has a significant number of homophonous syllables and words due to its limited phonetic inventory. All languages have homophones, but in Chinese they are especially abundant. This article is intended to present a list of common or representative homophonic puns in Mandarin Chinese, though many of the examples given are often homophones in other varieties as well. Terms in Chinese[edit] There is no common Chinese word for 'pun' in the oral language, although the phrase 一語雙關 yī yǔ shuāng guān may sometimes be used. Spring Festival traditions[edit] Chinese New Year, known in China as Spring Festival, has an abundance of unique traditions associated with it. Literature[edit] Circumventing internet censorship[edit] Joke Names[edit] Gifts[edit]

Le chinois au pluriel (CCTV) Mandarin Chinese: First Steps in Chinese Course Syllabus Skip Syllabus DescriptionWeek 1: Tones Learn the most crucial characteristic of Mandarin Chinese–tones. You cannot speak Mandarin without singing, without tones.Week 2: Pinyin It is absolutely useful for beginners to learn Pinyin, a transcription consisting of Latin characters.Week 3: Chinese characters After learning Pinyin and tones, you may try to ‘draw’ characters stroke by stroke.Week 4: One Character One Syllable It is essential to know that one character contains only one syllable. There is no prefix or suffix in Chinese.Week 5: One basic Chinese structure Introduction to basic Chinese structure, knowing and practicing basic sentences in everyday scenario. Chinese Grammar Wiki