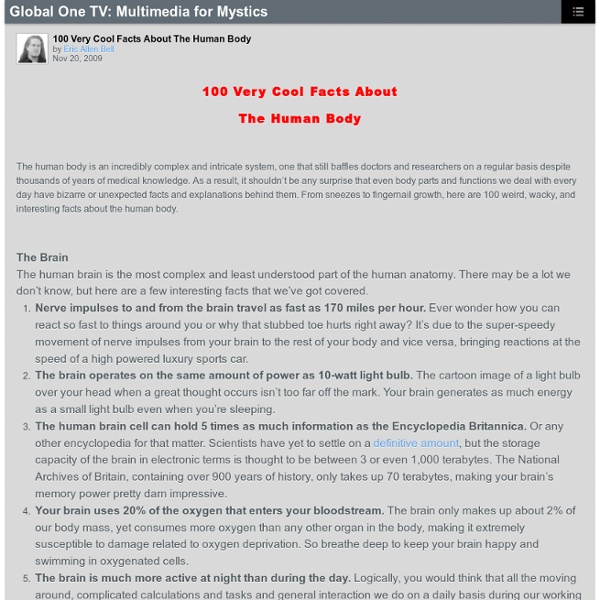 The Brain The human brain is the most complex and least understood part of the human anatomy. There may be a lot we don’t know, but here are a few interesting facts that we’ve got covered. Nerve impulses to and from the brain travel as fast as 170 miles per hour. Ever wonder how you can react so fast to things around you or why that stubbed toe hurts right away? It’s due to the super-speedy movement of nerve impulses from your brain to the rest of your body and vice versa, bringing reactions at the speed of a high powered luxury sports car.The brain operates on the same amount of power as 10-watt light bulb. Hair and Nails While they’re not a living part of your body, most people spend a good amount of time caring for their hair and nails. Facial hair grows faster than any other hair on the body. Internal Organs Though we may not give them much thought unless they’re bothering us, our internal organs are what allow us to go on eating, breathing and walking around. Bodily Functions Senses

Nerve Structures of the Spine Nerves control the body’s functions including the vital organs, sensation, and movement. The nervous system receives information and initiates an appropriate response. It is affected by internal and external factors (ie, stimulus). Nerves follow tracts and cross over junctions called synapses. Simplified, it is a complex communicative process between nerves conducted by chemical and/or electrical changes. Anatomical terms of location Standard anatomical terms of location deal unambiguously with the anatomy of animals, including humans. Furthermore, the terms are not language-specific, so with little or no translation, they can be understood by all zoologists. While these terms are standardized within specific fields of biology, there are unavoidable, sometimes dramatic, differences between some disciplines. For example, differences in terminology remain a problem that, to some extent, still separates the terminology of human anatomy from that used in the study of various other zoological categories. Introduction[edit] Unique anatomical terminology is used to describe humans and other animals.

The human microbiome: Me, myself, us WHAT’S a man? Or, indeed, a woman? Biologically, the answer might seem obvious. A human being is an individual who has grown from a fertilised egg which contained genes from both father and mother. Evolution Games, Labs, Acivities Evolution Living things change over time! Learn about and review the mechanisms that cause genetic change in populations, as well as several lines of evidence for change over time. Also, explore how organisms are classified into groups and named. Evolution Video Games, Virtual Labs & Activities Snurfle Islands! Advice from Somewhere ONE. Give people more than they expect and do it cheerfully. TWO. Marry a man/woman you love to talk to.

How To See An Aura: Learn To See The Hunan Aura Auras are an energy field that is present around every living creature and some inanimate objects. The aura is generated by the 7 major chakras and the 114 minor chakras in the human body. What Color Is Your Aura And What Does It Mean? Find Out Here! Anatomical terms of motion In general, motion is classified according to the anatomical plane it occurs in. Flexion and extension are examples of angular motions, in which two axes of a joint are brought closer together or moved further apart. Rotational motion may occur at other joints, for example the shoulder, and are described as internal or external. Other terms, such as elevation and depression, refer to movement above or below the horizontal plane. collective intelligence course aims to improve responses to COVID-19, other crises The GovLab at NYU Tandon teams with 11 global institutions to offer free classes on effective disaster response BROOKLYN, New York, April 06, 2020 (GLOBE NEWSWIRE) -- Working with 11 partner institutions around the world, The Governance Lab (The GovLab) at the New York University Tandon School of Engineering today launches a massive open online course (MOOC) on “Collective Crisis Intelligence.” The course is free, open to anyone, and designed to help institutions improve disaster response through the use of data and volunteer participation.

Concept Cartoons These concept cartoons were developed by Dianne Anderson and Kathleen Fisher (2002) as prompts for eliciting discussion about ideas in evolution. They can also be used as assessment tools. The cartoons are best suited for college non-majors and pre-college classes. The incorrect statements in the cartoons are derived from common naive conceptions. Print - 110 Predictions For the Next 110 Years · People will be fluent in every language. With DARPA and Google racing to perfect instant translation, it won't be long until your cellphone speaks Swahili on your behalf. · Software will predict traffic jams before they occur. Using archived data, roadside sensors, and GPS, IBM has come up with a modeling program that anticipates bumper-to-bumper congestion a full hour before it begins. Better yet, the idea proved successful in early tests—even on the Jersey Turnpike. · Climate-controlled jackets will protect soldiers from extreme heat and cold.

Updated map of the human brain hailed as a scientific tour de force When the German neurologist Korbinian Brodmann first sliced and mapped the human brain more than a century ago he identified 50 distinct regions in the crinkly surface called the cerebral cortex that governs much of what makes us human. Now researchers have updated the 100-year-old map in a scientific tour de force which reveals that the human brain has at least 180 different regions that are important for language, perception, consciousness, thought, attention and sensation. The landmark achievement hands neuroscientists their most comprehensive map of the cortex so far, one that is expected to supersede Brodmann’s as the standard researchers use to talk about the various areas of the brain. Scientists at Washington University in St Louis created the map by combining highly-detailed MRI scans from 210 healthy young adults who had agreed to take part in the Human Connectome Project, a massive effort that aims to understand how neurons in the brain are connected.

3000 Years Of Women’s Beauty Standards In A 3 Minute Video Beauty is indeed in the eye of the beholder, but our idea of beauty over the past few decades has most definitely been programmed into us. Our youth are growing up with mass amounts of marketing around them, as they watch television and participate in life, they are constantly bombarded with a picture of “what is beautiful.” It’s a shame how our children grow up striving to achieve that particular look, and how they can be made to feel “ugly” if they do not fit the accepted model of what our corporations have defined as beautiful.