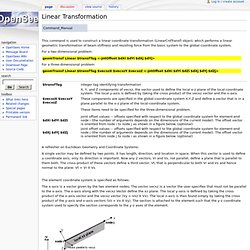 For a two-dimensional problem: For a three-dimensional problem: A refresher on Euclidean Geometry and Coordinate Systems: A single vector may be defined by two points. The element coordinate system is specified as follows: The x-axis is a vector given by the two element nodes; The vector vecxz is a vector the user specifies that must not be parallel to the x-axis. NOTE: When in 2D, local x and y axes are in the X-Y plane, where X and Y are global axes. Element 1 : tag 1 : vecxZ = zaxis geomTransf Linear 1 0 0 -1 Element 2 : tag 2 : vecxZ = y axis. Linear Algebra/Linear Transformations. A linear transformation is an important concept in mathematics because many real world phenomena can be approximated by linear models. 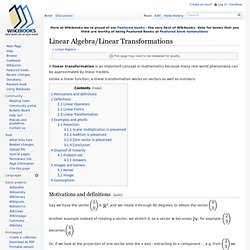 Unlike a linear function, a linear transformation works on vectors as well as numbers. Motivations and definitions[edit] Say we have the vector in , and we rotate it through 90 degrees, to obtain the vector Another example instead of rotating a vector, we stretch it, so a vector becomes , for example. Or, if we look at the projection of one vector onto the x axis - extracting its x component - , e.g. from we get These examples are all an example of a mapping between two vectors, and are all linear transformations. Linear transformation in rotating electrical machines. 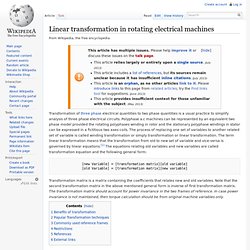 Polyphase a.c machines can be represented by an equivalent two phase model provided the rotating polyphases winding in rotor and the stationary polyphase windings in stator can be expressed in a fictitious two axes coils. Transformation (function) Let us have a clear visualization of this. In day-to-day life we use computers in all fields. Let us consider this window. This window if maximized to full dimensions of the screen is the reference plane. 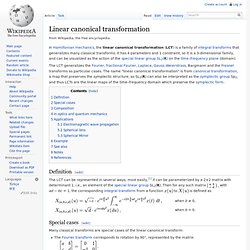 It has 4 parameters and 1 constraint, so it is a 3-dimensional family, and can be visualized as the action of the special linear group SL2(R) on the time–frequency plane (domain). The LCT generalizes the Fourier, fractional Fourier, Laplace, Gauss–Weierstrass, Bargmann and the Fresnel transforms as particular cases. The name "linear canonical transformation" is from canonical transformation, a map that preserves the symplectic structure, as SL2(R) can also be interpreted as the symplectic group Sp2, and thus LCTs are the linear maps of the time–frequency domain which preserve the symplectic form. Definition[edit] The LCT can be represented in several ways; most easily,[1] it can be parameterized by a 2×2 matrix with determinant 1, i.e., an element of the special linear group SL2(R). 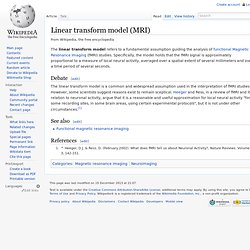 Specifically, the model holds that the fMRI signal is approximately proportional to a measure of local neural activity, averaged over a spatial extent of several millimeters and over a time period of several seconds. The linear transform model is a common and widespread assumption used in the interpretation of fMRI studies. However, some scientists suggest reasons exist to remain sceptical.

Heeger and Ress, in a review of fMRI and its relation to neuronal activity, argue that it is a reasonable and useful approximation for local neural activity "for some recording sites, in some brain areas, using certain experimental protocols", but it is not under other circumstances.[1] Functional magnetic resonance imaging. Semilinear transformation. Affine transformation.

An image of a fern-like fractal that exhibits affine self-similarity. 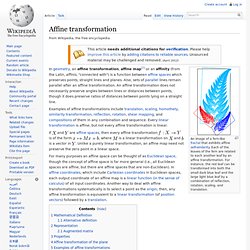 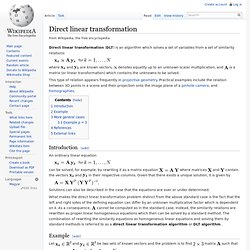