Creditors in Commerce - Recommended Resources. Part2.html. Part II: The Off-Ledger, Occult EconomyOperation Golden Lily, The Black Eagle Trust, 9/11, The Dragon Family, the $1 trillion dollar Keenan federal lawsuit, and the Global Collateral Accounts/World Global Settlements **Special Note: Many of the video files/documentary films that you will see posted throughout this website are of a very sensitive nature, and thus continue to be removed from the internet only to be re-posted later by a different user. 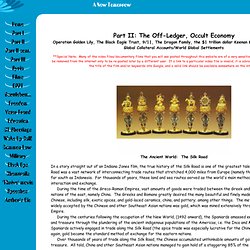 If a link to a particular video file is invalid, it is advised that you simply input either the title of the film and/or keywords into Google, and a valid link should be available somewhere on the internet. Mystery Science: More Details on the Strange Organism That Could Destroy Monsanto. Last Updated May 5, 2011 6:38 PM EDT Back in January, a noted plant scientist who spent much of his career at Purdue Universitysent a letter to the USDA informing the agency that he'd discovered a mysterious new disease-causing organism in Monsanto's (MON) genetically engineered Roundup Ready corn and soybeans. 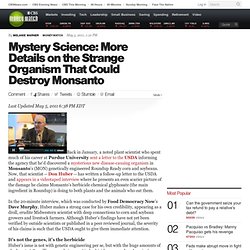 Now, that scientist -- Don Huber -- has written a follow-up letter to the USDA and appears in a videotaped interview where he presents an even scarier picture of the damage he claims Monsanto's herbicide chemical glyphosate (the main ingredient in Roundup) is doing to both plants and the animals who eat them. In the 20-minute interview, which was conducted by Food Democracy Now's Dave Murphy, Huber makes a strong case for his own credibility, appearing as a droll, erudite Midwestern scientist with deep connections to corn and soybean growers and livestock farmers. Huber says the same thing has happened in animals. But that's not what the USDA did. The Central Intelligence Agency 9/11 File: Hundreds of Secret Agency Documents on Osama Bin Laden Declassified. Washington, D.C., June 19, 2012 – The National Security Archive today is posting over 100 recently released CIA documents relating to September 11, Osama bin Laden, and U.S. counterterrorism operations. 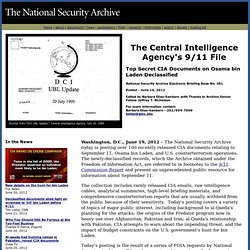 The newly-declassified records, which the Archive obtained under the Freedom of Information Act, are referred to in footnotes to the 9/11 Commission Report and present an unprecedented public resource for information about September 11. The collection includes rarely released CIA emails, raw intelligence cables, analytical summaries, high-level briefing materials, and comprehensive counterterrorism reports that are usually withheld from the public because of their sensitivity. Today's posting is the result of a series of FOIA requests by National Security Archive staff based on a painstaking review of references in the 9/11 Commission Report. Reports on early attempts to apprehend bin Laden detail the beginning of the U.S. Predator drone program in Afghanistan and Pakistan. 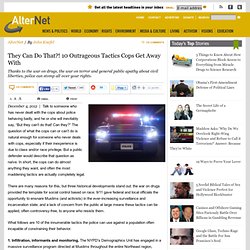 Join our email list: Stay up to date with the latest headlines via email. Talk to someone who has never dealt with the cops about police behaving badly, and he or she will inevitably say, “But they can't do that! Can they?” There are many reasons for this, but three historical developments stand out: the war on drugs provided the template for social control based on race; 9/11 gave federal and local officials the opportunity to ensnare Muslims (and activists) in the ever-increasing surveillance and incarceration state; and a lack of concern from the public at large means these tactics can be applied, often controversy-free, to anyone who resists them.

What follows are 10 of the innumerable tactics the police can use against a population often incapable of constraining their behavior. 1. Muslims are not the only group that has been targeted. 2. Thoughts of How It Works. JFK. 9/11. All Day of 9/11 Events. Willie Brown. 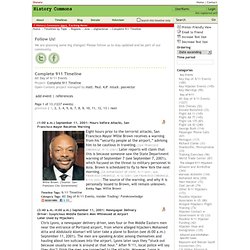 [Source: San Francisco City Government]Eight hours prior to the terrorist attacks, San Francisco Mayor Willie Brown receives a warning from his “security people at the airport,” advising him to be cautious in traveling. [San Francisco Chronicle, 9/12/2001] Later reports will claim that this is because someone saw the State Department warning of September 7 (see September 7, 2001), which focused on the threat to military personnel in Asia. Brown is scheduled to fly to New York the next morning.

[US Department of State, 9/7/2001; San Francisco Chronicle, 9/12/2001; San Francisco Chronicle, 9/14/2001] The source of the warning, and why it is personally issued to Brown, will remain unknown. Chris Lyons, a newspaper delivery driver, sees four or five Middle Eastern men near the entrance of Portland airport, from where alleged hijackers Mohamed Atta and Abdulaziz Alomari will later take a plane to Boston (see (6:00 a.m.) Michael Tuohey. Odigo’s logo. Stuff worth seeing again.