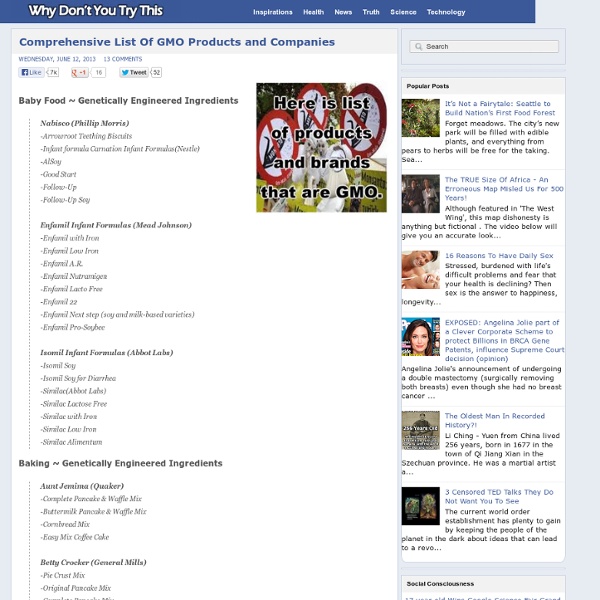 8 Foods Even The Experts Won’t Eat Food scientists are shedding light on items loaded with toxins and chemicals–and simple swaps for a cleaner diet and supersized health. Experts from different areas of specialty explain why they won’t eat these eight foods. Clean eating means choosing fruits, vegetables, and meats that are raised, grown, and sold with minimal processing. Often they’re organic, and rarely (if ever) should they contain additives. But in some cases, the methods of today’s food producers are neither clean nor sustainable.

Why 80% of People Worldwide Will Soon Stop Eating Wheat The future of wheat is certain, and it's toxic. There are as many health risks associated with the consumption of wheat as there are nutritional benefits claimed by the wheat industry. Why is there such a strong emphasis on the development of wheat products all over the world when there are so many adverse and crippling effects such as neurological impairment, dementia, heart disease, cataracts, diabetes, arthritis and visceral fat accumulation, not to mention the full range of intolerances and bloating now experienced by millions of people?

Can Your Own Food While the people of the United States become increasingly more dependent on the supermarket and restaurants to feed themselves, Doug Miller of Southeast Ohio is focused on becoming more self-sustaining. Miller was raised on a farm and has been canning food since his youth. The benefits of farming and canning food are not just his own, though. The food grown on Miller’s Hocking County farm is for his wife, his family, his friends, and others members of the community. With sweet potatoes, squashes, cucumbers, banana peppers, onions, tomatoes, watermelon, cantaloupe, and other foodstuffs growing in the raised-bed gardens on the family farm, their pantry is always full of organic, naturally grown fruits and vegetables. Jon Stewart VS. Monsanto: Hilarious Takedown The Daily Show team learns that greedy farmers have threatened the livelihood of Monsanto’s “heroic” patent attorneys. GMOsMonsantothe daily show Related Posts « Top 20 Causes of Pet Poisoning 440Hz Music – Conspiracy To Detune Us From Natural 432Hz Harmonics?

My Family Stopped Eating Sugar for a Year and This is What Happened By Everyday Health Guest Contributor Published Apr 1, 2014 By Eve O. Schaub, Special to Everyday Health Once upon a time, I was healthy; at least I thought I was. Sure, I lacked enough energy to get me through the day, but with all the commercials on TV touting energy drinks for America’s tired masses, I always assumed I wasn’t the only one suffering. Complete List of Non-GMO Food Brands Genetically modified foods have been linked to a number of health and environmental dangers over the years. Frankly, many people simply don’t trust them and this is for good reason. Although science offers data on both sides of the equation, GMOs have not been around long enough to call them safe with long term use. Given the health problems that are already showing up, we should be kicking the practice of consuming GMOs. Corporations are pushing GMOs more aggressively than ever; fortunately this is only a serious problem in North America as most other places in the world have banned the production and sale of GMO products all together.

8 Foods Even The Experts Won’t Eat by April McCarthy Food scientists are shedding light on items loaded with toxins and chemicals–and simple swaps for a cleaner diet and supersized health. Experts from different areas of specialty explain why they won’t eat these eight foods. Clean eating means choosing fruits, vegetables, and meats that are raised, grown, and sold with minimal processing. Often they’re organic, and rarely (if ever) should they contain additives.

Voracious Worm Evolves to Eat Biotech Corn Engineered to Kill It - Wired Science Corn rootworm on the roots of a corn plant. Image: Sarah Zukoff/Flickr One of agricultural biotechnology’s great success stories may become a cautionary tale of how short-sighted mismanagement can squander the benefits of genetic modification. After years of predicting it would happen — and after years of having their suggestions largely ignored by companies, farmers and regulators — scientists have documented the rapid evolution of corn rootworms that are resistant to Bt corn. Until Bt corn was genetically altered to be poisonous to the pests, rootworms used to cause billions of dollars in damage to U.S. crops.

How To Balance Your pH Levels and Find Out if You are Too Acidic Alkalizing has become a very popular subject recently, and for good reason too! The emphasis on the importance of the bodies pH might seem like a new fashion, but the science and art of pH balancing have had a long tradition and unlike some other trendy theories, it has successfully withstood the test of time. If you think back to chemistry or science class, you might recall comparing an acid versus a base, or the importance of pH balance.