Contemporary slavery. Modern incidence of slavery, as a percentage of the population, by country. 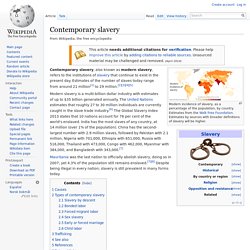 Estimates from the Walk Free Foundation. Estimates by sources with broader definitions of slavery will be higher. Contemporary slavery, also known as modern slavery, refers to the institutions of slavery that continue to exist in the present day. Estimates of the number of slaves today range from around 21 million[1] to 29 million.[2][3][4][5] Modern slavery is a multi-billion dollar industry with estimates of up to $35 billion generated annually.

Mauritania was the last nation to officially abolish slavery, doing so in 2007; yet 4.3% of the population still remains enslaved.[7][8] Despite being illegal in every nation; slavery is still prevalent in many forms today. Causes[edit] Slaves can be an attractive investment because the slave-owner only needs to pay for sustenance and enforcement. Free workers also earn compensating differentials, whereby they are paid more for doing unpleasant work. Bonded labor[edit] See comments for citation. See comments for citation. Sustainable Development Goals. Sustainable Development Goals End poverty in all its forms everywhere End hunger, achieve food security and improved nutrition and promote sustainable agriculture Ensure healthy lives and promote well-being for all at all ages. 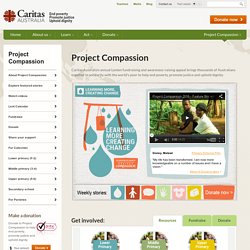 The appeal raised the equivalent of $90,000 towards community 'self-help' projects in countries like Papua New Guinea, Vietnam and Malaysia. Take a trip down memory lane Thank you for your support in 2015 In Lent 2015, our incredibly generous supporters raised a record-breaking $11.57 million for Project Compassion! Weekly fundraising tally Your support will bring lasting change to vulnerable communities around the world. Catholic Social Teaching - Explore the principles that shape our work to help end poverty and promote justice. 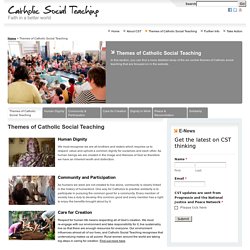 As human beings we are created in the image and likeness of God so therefore we have an inherent worth and distinction. Community and Participation As humans we were are not created to live alone, community is clearly linked in the history of humankind. One way for Catholics to practise solidarity is to participate in pursuing the common good for a community. Care for Creation Respect for human life means respecting all of God’s creation. HumanTraffickingAndCST. Ethics - Slavery: The law against slavery. Human rights and slavery powerpoint. The Universal Declaration of Human Rights. Preamble Whereas recognition of the inherent dignity and of the equal and inalienable rights of all members of the human family is the foundation of freedom, justice and peace in the world, 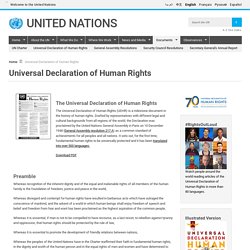 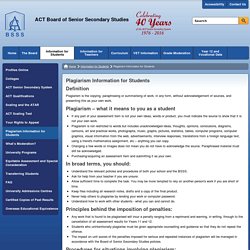 Plagiarism – what it means to you as a student If any part of your assessment item is not your own ideas, words or product, you must indicate the source to show that it is not your own work.Plagiarism is not restricted to words but includes unacknowledged ideas, thoughts, opinions, conclusions, diagrams, cartoons, art and practical works, photographs, music, graphs, pictures, statistics, tables, computer programs, computer graphics, visual information from the web, advertisements, interview responses, translations from a foreign language text, using a friend's mathematics assignment, etc – anything you can copy.Changing a few words or images does not mean you do not have to acknowledge the source.

In broad terms, you should: Principles behind the imposition of penalties: Year 12 RE Task 1 2017 Slavery (2)(1) Current Issues / Resources August 2018 - Australian Catholic Social Justice Council. NATIONAL APPEAL: ACRATH LOSE FEDERAL FUNDINGACRATH (Australian Catholic Religious Against Trafficking in Humans) has launched a national fund-raising appeal after today’s announcement from the Federal Government revealed that it would not be funding ACRATH this year. 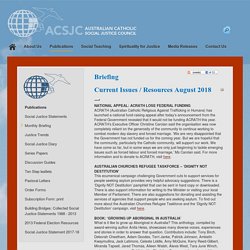 ACRATH’s Executive Officer Christine Carolan said the organisation was now completely reliant on the generosity of the community to continue working to combat modern day slavery and forced marriage. ‘We are very disappointed that the Government has not funded us for the coming year. But we are hopeful that the community, particularly the Catholic community, will support our work. We have come so far, but in some ways we are only just beginning to tackle emerging issues such as forced labour and forced marriage,’ Ms Carolan said. For more information and to donate to ACRATH, visit here.