William Forsythe interview. Lithe and active though he is, Forsythe is 60 this year, enjoying being a grandfather. 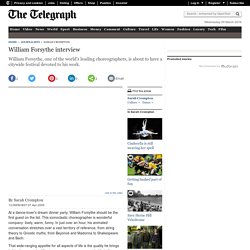 Some members of his company are new recruits, and some have moved with him from Ballet Frankfurt to his current, smaller set-up. "I really like my performers," he says. "It's more like a family. " As they work together, he asks new questions, seeks new answers. "Ballet is infinitely interesting. British audiences will have a chance to see where these investigations have taken him when Sadler's Wells's extensive Focus on Forsythe season reaches its climax with a three-week retrospective beginning on April 20.

More than half are being staged in galleries or other spaces. "No one ever participated in the big conversation by saying the same thing over and over again," he says, with his quick, wry smile. The starting points for the works in the season reveal his restless intelligence. "We've had grandmas swinging their crutches, people swinging their shopping bags," Forsythe says, laughing. Ballet Frankfurt. One Flat Thing, reproduced (2000) BALLET FRANKFURT The Room as it Was Duo (N.N.N.N.) 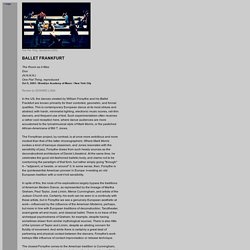 One Flat Thing, reproduced Oct 5, 2003 / Brooklyn Academy of Music / New York City Review by EDWARD LUNA In the US, the dances created by William Forsythe and his Ballet Frankfurt are known primarily for their contorted, geometric, and formal qualities. This is contemporary European dance at its most obtuse and abstract; with harsh, minimalist lighting, electronic music scores, rail-thin dancers, and frequent use of text. Such experimentalism often receives a rather cool reception here, where dance audiences are more accustomed to the lyrical/musical style of Mark Morris, or the pastiched African-Americana of Bill T.

Jones. The Forsythian project, by contrast, is at once more ambitious and more modest than that of the latter choreographers. The opener, called The Room as it Was (2002) features four female and four male dancers. The piece eventually shifts into a completely new setup. Duo (1996) One Flat Thing, reproduced (2006) a film by Thierry De Mey. Video Still from One Flat Thing, reproduced “A choreographic object is not a substitute for the body, but rather an alternative site for the understanding of potential instigation and organization of action to reside. 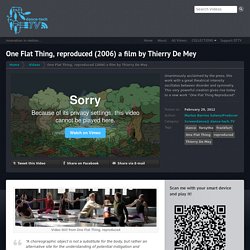 Ideally, choreographic ideas in this form would draw an attentive,diverse readership that would eventually understand and, hopefully, champion theinnumerable manifestations, old and new, of choreographic thinking.”William Forsythe on Choreographic Objects (Essay) William Forsythe – One flat thing reproduced…. “A choreographic object is not a substitute for the body, but rather an alternative site for the understanding of potential instigation and organization of action to reside. 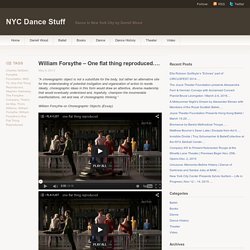 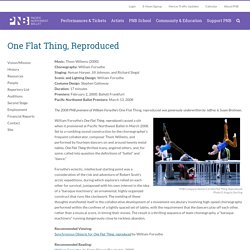 William Forsythe Choreographic Objects: Biography. Has been active in the field of choreography for over 45 years. 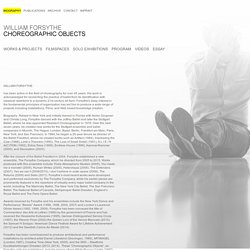 His work is acknowledged for reorienting the practice of ballet from its identification with classical repertoire to a dynamic 21st century art form. Forsythe's deep interest in the fundamental principles of organization has led him to produce a wide range of projects including Installations, Films, and Web based knowledge creation. Biography Raised in New York and initially trained in Florida with Nolan Dingman and Christa Long, Forsythe danced with the Joffrey Ballet and later the Stuttgart Ballet, where he was appointed Resident Choreographer in 1976. Synchronous Objects. DANCE REVIEW - Loud Tables, but Not a Restaurant. The mighty roar of 20 metal tables dragged across the floor is heard not throughout the land but at the Brooklyn Academy of Music, where William Forsythe's splendid dancers in Ballett Frankfurt are staging the grandest of all finales this week. 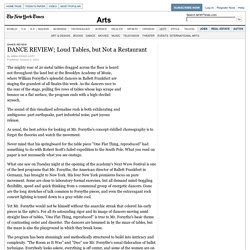 As the dancers race to the rear of the stage, pulling five rows of tables whose legs scrape and bounce on a flat surface, the program ends with a high-decibel screech. The sound of this visualized adrenaline rush is both exhilarating and ambiguous: part earthquake, part industrial noise, part joyous release. As usual, the best advice for looking at Mr. Forsythe's concept-riddled choreography is to forget the theories and watch the movement. Never mind that his springboard for the table piece ''One Flat Thing, reproduced'' had something to do with Robert Scott's failed expedition to the South Pole.

What one saw on Tuesday night at the opening of the academy's Next Wave Festival is one of the best programs that Mr. Yet Mr.