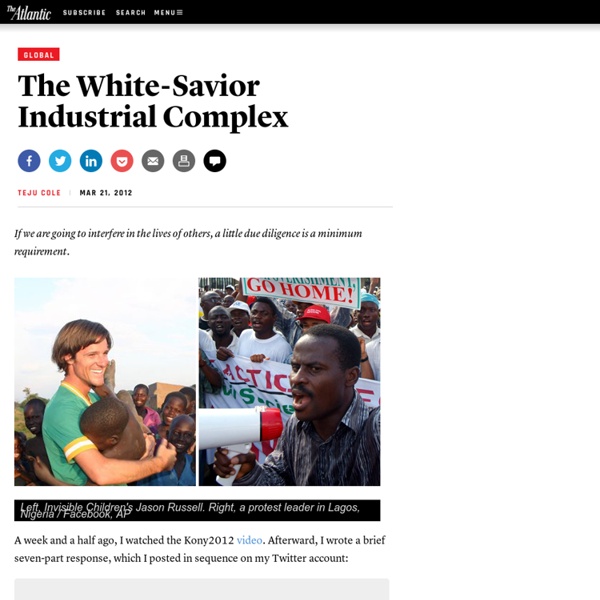 If we are going to interfere in the lives of others, a little due diligence is a minimum requirement. Left, Invisible Children's Jason Russell. Right, a protest leader in Lagos, Nigeria / Facebook, AP A week and a half ago, I watched the Kony2012 video. Afterward, I wrote a brief seven-part response, which I posted in sequence on my Twitter account: These tweets were retweeted, forwarded, and widely shared by readers. These sentences of mine, written without much premeditation, had touched a nerve. This weekend, I listened to a radio interview given by the Pulitzer Prize-winning journalist Nicholas Kristof. Those tweets, though unpremeditated, were intentional in their irony and seriousness. But there's a place in the political sphere for direct speech and, in the past few years in the U.S., there has been a chilling effect on a certain kind of direct speech pertaining to rights. It's only in the context of this neutered language that my rather tame tweets can be seen as extreme.

Harmful Communication, Part One: Intent Is Magic [Trigger warning for harmful language, emotional manipulation, rape culture.] This is the first post in a series about language. Specifically, harmful language. We talk about physical and emotional abuse a lot in this space, and, to some extent, we also talk about abusive language: Under the "this shit doesn't happen in a void" refrain, I've frequently addressed hate speech, and we acknowledge that bullying is abusive even without any physical violence. We also recognize, in discussions of rape culture and in conversations about institutional oppressions, that systemic harm is not limited to physical violence, but additionally manifests as harmful language in the form of rape jokes or slurs or violent rhetoric, as examples.

Why Kony 2012 Went Viral The Kony 2012 video by the U.S. non-profit Invisible Children is now the most viral video of all time. The video relies upon a very simple narrative and two opposing forces: The white American male hero wants to defeat the bad guy, Ugandan war lord Joseph Kony, and make the future better for children, especially his own. The video is narrated entirely by the Invisible Children Co-Founder Jason Russell. Kony 2012 has succeeded in part because it echoes and amplifies a classic narrative that America buys into and loves: The white male savior, swooping into Africa to save "those poor people," and coming out as the hero, the masculine father figure whose blonde-haired, blue-eyed five-year-old boy will one day do for the world what his dad tried to do. As such, the video hardly gives a voice to the people it is trying to "save," instead painting them as helpless one-dimensional victims exploited for the purposes of cajoling a Western audience out of its Internet-amplified apathy.

The Decline of American Nationalism: Why We Love to Hate Kony 2012 - Max Fisher - International The backlash against the misguided video campaign may say more about how American self-conceptions have changed in the last 10 years. Left, American school children say the Pledge of Allegiance in this 1942 photo. Right, Invisible Children volunteers salute for the Kony 2012 video. / AP, Vimeo The Chinese-African Union - An FP Slide Show When the new African Union (AU) headquarters was unveiled in Addis Ababa, Ethiopia, earlier this year, the $200 million structure -- now the capital city's tallest building -- caused a splash. But it wasn't just the mammoth building's impressive spec sheet that drew comment, it was also the project's bankroller: China. The Chinese government has been leading a construction boom across Africa, setting up huge dams and infrastructure projects, soccer stadiums, and even the world's third largest mosque in Algeria. And the lavish new AU headquarters was paid for -- in its entirety -- by the Chinese government. The towering edifice houses three conference centers, its own helipad, and enough office space to accommodate 700 workers.

Exposing the Racist History Of Libertarianism And Murray Rothbard Murray Rothbard was the student of Ludwig Von Mises and a friend of Ayn Rand. Rothbard was a racist, and believed in the "voluntary" separation of the races. I have argued that his teacher, Mises, was an elitist with fascist tendencies. Jeremy Konyndyk: Kony 2012 A number of pundits have rushed to cast the firestorm around the Kony 2012 video as pointless squabbling, with Nick Kristof the latest to chime in. After all, they argue, how could anyone question an effort to raise awareness about the damage done by the warlord Joseph Kony and his militia, the Lord's Resistance Army? This controversy should not be so casually dismissed. Criticism of the video reflects an important debate over how humanitarian advocates should responsibly and sensitively balance the priorities of accuracy and mass appeal -- and how that balance can affect the lives of those that advocates seek to help.

Kony 2012 gives 'false impression' of Uganda, PM Amama Mbabazi says in critical video response By Jocelyn Edwards KAMPALA — Uganda’s government has taken to the Internet to correct a “false impression” about the country it says was created by a U.S. celebrity-backed online campaign to hunt down fugitive warlord Joseph Kony. Uganda, which is spearheading efforts to find the suspected war criminal whose global profile soared after a YouTube video went viral, wants to show the world Kony is not in the country and it is doing all it can to find him. Wanted by the International Criminal Court, Kony is accused of abducting children to use as fighters and sex slaves and is said to have a fondness for hacking off limbs. After founding his Lord’s Resistance Army (LRA) in the 1980s, Kony terrorized large parts of Uganda but his reign of terror has subsided since 2005 and he is now believed to command only a few hundred followers, scattered in remote jungle hideouts in neighbouring countries. “The Kony 2012 campaign fails to make one crucial point clear.

Sharing the Burden - By Charles Kenny It's 113 years since Rudyard Kipling -- poet propagandist for empire -- exhorted Americans, newly ensconced as the colonial power in the Philippines, to "Take up the White Man's burden/The savage wars of peace/Fill full the mouth of Famine/And bid the sickness cease." A century and change later, a new survey suggests people in the rich world have attitudes towards developing countries that would make Kipling proud. And not only are their views completely out of touch with what is going on in Africa, Asia, and Latin America, but they are positively harmful to continued progress in the developing and rich worlds alike. The survey, by Intermedia, looks at popular attitudes towards international development in countries including Britain, France, Germany, and the United States.

Push(back) at the Intersections: How About Some -isms with Your Feminism? What do Mary Daly, Margaret Sanger, Nellie McClung, Martha Griffiths, Gloria Steinem, Geraldine Ferraro, Julie Bindel, Robin Morgan, Germaine Greer, Elizabeth Cady Stanton, Janice Raymond, Sheila Jeffreys, and Beth Elliott have in common? You were going to tell me they're feminist icons, weren't you? Awww, how cute. That's actually the wrong answer.

The Road to Hell Is Paved with Viral Videos - By David Rieff Click here to see photos of the evolution of the LRA. When and how so many Americans, young people in particular, were convinced, or convinced themselves, that awareness offers the key to righting wrongs wherever in the world they may be is hard to pinpoint. But whatever else it does and fails to do, Kony 2012, the 30-minute video produced by a previously obscure California- and Uganda-based charity called Invisible Children that seeks to "make Joseph Kony famous in 2012" so that this homicidal bandit leader of the Lord's Resistance Army (LRA) in central Africa will be hunted down and turned over to the International Criminal Court, illustrates just how deeply engrained in American culture this assumption has now become.

Viral Video, Vicious Warlord My starting point is a “bravo” for film-makers for galvanizing young Americans to look up from their iPhones and seek to make a difference for villagers in central Africa who continue to be murdered, raped and mutilated by Kony and his Lord’s Resistance Army. Just in the last two months, the Lord’s Resistance Army has mounted 20 raids in Congo alone. But nobody fights more wickedly than humanitarians, so there have been a series of attacks on the video. Let me try to address some of the criticisms. Let Africans resolve their own problems. It’s neocolonialist for Americans to think that they can solve Congolese problems, when they can’t even solve their own.

"Decolonizing the Franc Zone" by Sanou Mbaye Exit from comment view mode. Click to hide this space DAKAR – France is wrestling with a burden of debts and public deficits that led Standard & Poor’s recently to downgrade its credit rating. Even as the risk of recession looms, the country has been forced to implement a drastic austerity program. But France’s woes are also being felt far beyond its borders, sparking rumors of a possible devaluation of the CFA franc, the common currency of the franc zone, which comprises 14 African countries and the Comoros Islands in the Indian Ocean.

Party Trouper The holiday season is filled with lovely stuff: Cookies! Pretty lights! Presents to give and receive! An overabundance of peppermint-flavored things! It’s all quite delightful, really.