To Waterfall or Not To Waterfall. Yesterday I returned from a quick trip to visit the folks in Las Vegas and check on the progress of the fixer upper, things are moving along in the kitchen, I found my dream backsplash and the fabricators I hired came out to make the template for the new countertops. 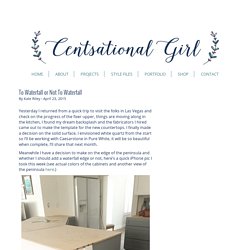 I finally made a decision on the solid surface, I envisioned white quartz from the start so I’ll be working with Caesarstone in Pure White, it will be so beautiful when complete, I’ll share that next month. Meanwhile I have a decision to make on the edge of the peninsula and whether I should add a waterfall edge or not, here’s a quick iPhone pic I took this week (see actual colors of the cabinets and another view of the peninsula here.)

I have the choice between a classic horizontal surface that ends here or I could have it drop down to the floor with a waterfall edge. I’m torn for reasons shared below, but first a look at some waterfall edges to collectively drool over. space architects and planners blansfield builders. Q&A Day: What’s the difference between modern and contemporary decorating? Part 1. I’d love to receive questions from readers about any of the posts on this blog or other subjects I might be able to cover. 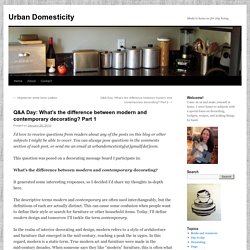 You can always pose questions in the comments section of each post, or send me an email at urbandomesticity[at]gmail[dot]com. This question was posed on a decorating message board I participate in: What’s the difference between modern and contemporary decorating? It generated some interesting responses, so I decided I’d share my thoughts in-depth here. The descriptive terms modern and contemporary are often used interchangeably, but the definitions of each are actually distinct. In the realm of interior decorating and design, modern refers to a style of architecture and furniture that emerged in the mid-century, reaching a peak the in 1950s.

Photo from Ameublement et Decoration Modernes, 1961 In the early part of the century into the 1950s, art and design broke with tradition, hence the term modern was coined. Photo by Supagroova on Flickr. Photo by jmayzurk on Flickr. Modern Architecture Defining Characteristics - Distinct Build Okanagan. Inspired by Function Modern architecture breaks away from cookie-cutter design and traditional aesthetics. 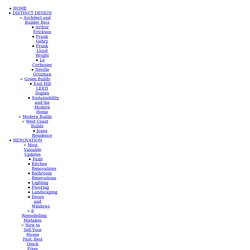 It strives to create home designs that go beyond “standard” ideas and instead pursue projects inspired by layout, location, and function. Frank Lloyd Wright’s mentor, Louis Sullivan famously stated that, “Form follows function”. This idea is expressed by Modernisms’ tendency to have land or the function of a project dictate much of the design ideas. For example, Wright was famous for building with the land - his residential homes almost always relied on the lot to determine how the building was to be laid out. Simplicity in Form and Design Modern architecture is typically free of clutter and unnecessary elements. Nothing to Hide Rather than concealing the nature of the home, Modern style wants the viewer to see the inner-workings and the true nature of the project. Love of all things Linear Bold Roof Lines Windows as Design Creative Open Floor Plans Post-and-Beam Architecture. Modern or Contemporary Architecture? The Interiors Edition.

Modern vs Contemporary – What’s The Difference? This question has come up time and time again. 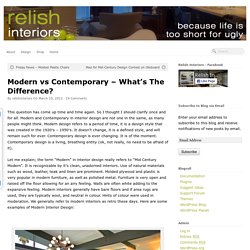 So I thought I should clarify once and for all. Modern and Contemporary in interior design are not one in the same, as many people might think. Modern design refers to a period of time, it is a design style that was created in the 1920′s – 1950′s. It doesn’t change, it is a defined style, and will remain such for ever. Contemporary design is ever changing. Let me explain; the term “Modern” in interior design really refers to “Mid Century Modern”. Modern Interior Design Ok, so what is “Contemporary Design” then? Right now a contemporary home might incorporate large windows, unique or odd shapes, open plan and harmony with the surrounding landscape. I think part of the confusion is that right now, many elements of mid-century modern design are very popular and are being incorporated into contemporary designs. Contemporary Interior Design I always welcome your comments, questions or feedback. -Leah.